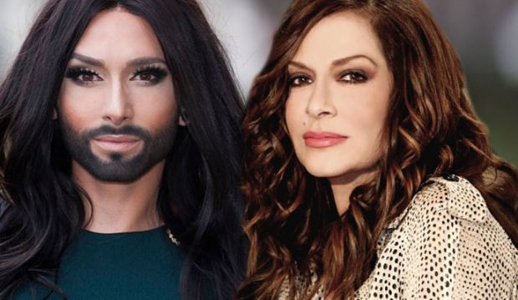 Eurovision singing sensation Conchita Wurst, left, and Greek entertainer Anna Vissi, right, will appear at the Jackie O’ Beach club on Mykonos Saturday night. This image was posted with a recent protothemanews report about the event.

Big-name acts: The Mykonos party scene will reach a midsummer climax over the next four days when several internationally-renowned singers make live appearances at two of the island’s top beach clubs.

Anna Vissi will perform at Jackie O’ Beach Saturday July 26 during a special concert event celebrating the 40th anniversary of her music career. She will be joined by “bearded lady” Conchita Wurst, who won the 2014 Eurovision Song Contest for Austria six weeks ago with the song “Rise Like a Phoenix.”

Jackie O’ Beach is located at Super Paradise beach. The popular straight-friendly gay club will open its doors at 7:30 for the event, which will feature warm-up performances by Greek singer Demy as well as Greek Eurovision participants Freaky Fortune, Risky Kidd and Apostolos Mitropoulos.

Tickets are being sold at Jackie O’ Beach as well as its sister bar, Jackie O’ Mykonos in Mykonos Town. The club’s website doesn’t provide ticket prices, but a Greek Reporter article published today said prices range from €100 to €450.

On Wednesday July 30, international singing superstar Julio Iglesias will appear with popular Greek performer Antonis Remos at Nammos by the Sea, the chic restaurant and nightclub at trendy Psarou beach.

The Facebook page for the Julio Iglesias Meets Antonis Remos event doesn’t list ticket prices, but one fan posted that she heard standing-room tickets start at €60 while tables are priced from €1000. Tickets can be ordered by contacting Nammos by telephone at: +30 22890 22440.

Please click on the number 2 in the link below to read about more events taking place on Mykonos.

2014 Greek holiday report Part 5: A coastal walk and an evening in town for our last day on Naxos