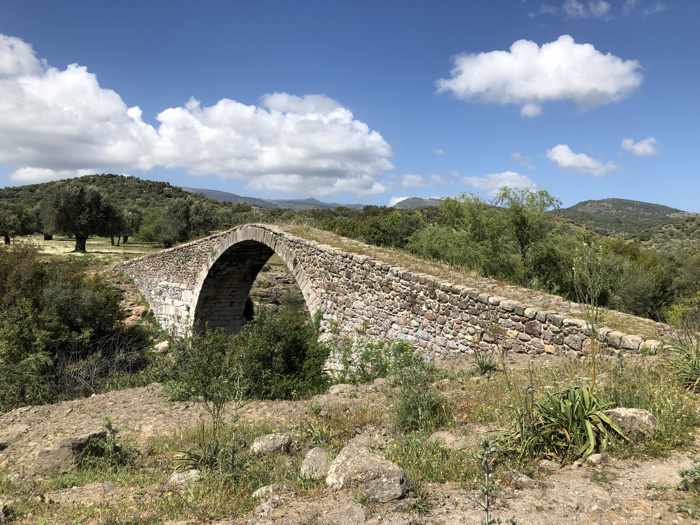 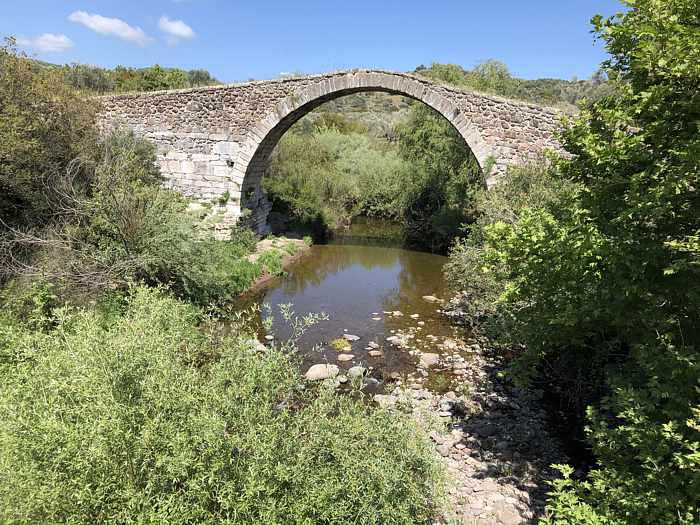 Walking back centuries: Unlike the other two tourist couples that showed up within moments of our own arrival, we did cross the Kremasti bridge when we got to it.

We couldn’t pass up the rare opportunity to walk on a hand-built stone viaduct that may have been built as long as 600 years ago. Rare for us, because bridges even just a century old are few and far between back home in Canada, so crossing an ancient span isn’t something we can do  any old day of the week.

However, walking on medieval bridges might be something those other people can do wherever they live, which would explain why they didn’t share our enthusiasm to get up close for a better look at Kremasti. The two women from the first car strode  to the edge of the olive grove at the north side of the bridge for a brief look-see, then promptly drove off in the direction of Stypsi village. The driver of the second vehicle walked only a few steps from his car to snap photos — from a spot on the road that didn’t offer particularly good views of the monument standing 30 meters distant.  His passenger didn’t even get out; she seemed more interested in something on her cellphone. Photo-taking finished, the man climbed back into the driver’s seat, made a three-point turn, and drove off the way they had come.

In less than four minutes tops, both couples had arrived and departed, probably adding a “been there, seen that” checkmark to their lists of historic sites they had “visited” on Lesvos.

We didn’t mind having the old bridge all to ourselves; we got to appreciate its elegant architecture and examine its impressive masonry and engineering without getting in the way — or in the background — of someone else’s selfie.  And on such a sunny and warm spring afternoon, who wouldn’t want to enjoy the fresh air and quiet beauty of the countryside, take a stroll through the lovely olive grove, and imagine how crucial the bridge would have been for regional travel in the centuries before motor vehicles? Oh, right — we can think of at least four people who would prefer not to! But we weren’t keen to hurry back into the car to see more of Lesvos through the windshield and side windows. We would get to do that during the drive back to our hotel in Molyvos later in the day. Instead, we took a nice, slow walk across 600 years of Lesvos history, and savored the experience of simply being there for awhile. Besides, we were on Lesvos, where rushing around just isn’t the way to see and enjoy the subtle beauty and character of the island. 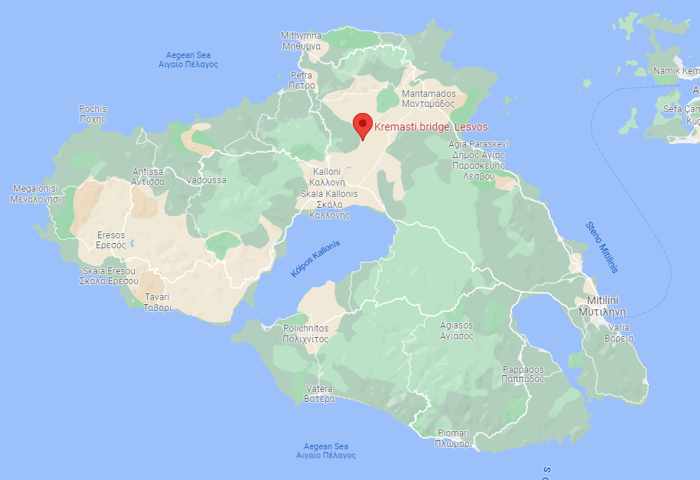 This Google map pinpoints the Kremasti bridge location in northern Lesvos, approximately 3 km northwest of the town of Agia Paraskevi. 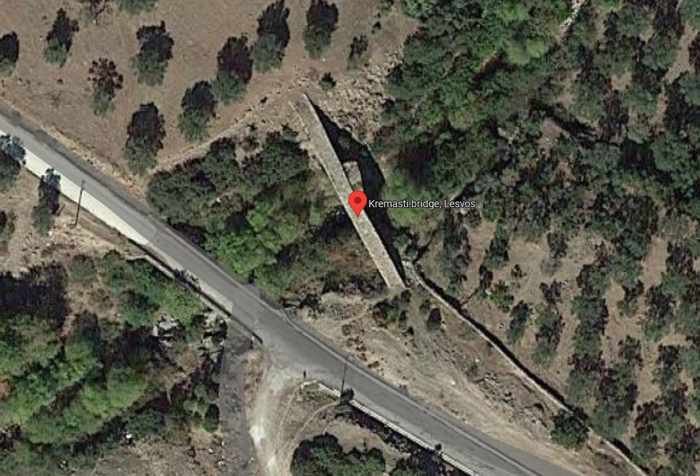 This Google satellite image shows the historic bridge and the modern-era road that carries motor vehicle traffic through the countryside of rolling hills to Stypsi village.

Our travel materials and guidebooks didn’t provide much information about Kremasti. Most said basically the same things: it’s “the largest and best-preserved medieval bridge in the eastern Aegean” (to quote our 4th edition copy of The Rough Guide to the Dodecanese and East Aegean Islands); it is widely believed to be have been built sometime during the period the Gattilusio family of Genoa controlled Lesvos (1355 to 1462); it crosses a stream which flows into the Tsiknias River; and it stands 8.5 meters tall at its highest point. (Curiously, no further dimensions, such as the length and width of the span, were described in any of the publications). 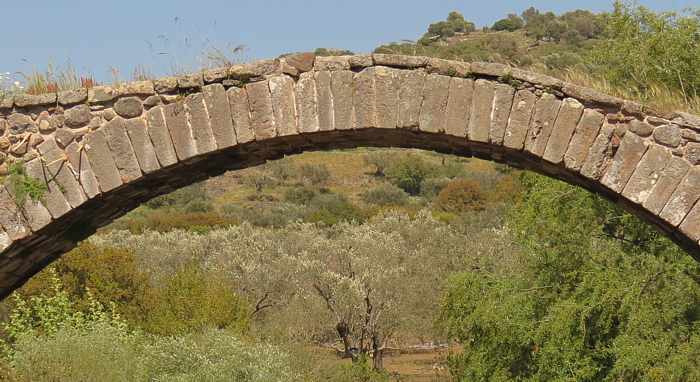 When we searched online for more details on the bridge’s history, we discovered that some websites dispute the date of construction, saying architectural details suggest Kremasti may have been built more than 100 years after the Gattilusio era, most likely during the 16th Century.  Some sources also mentioned that, according to local legend, the master builder buried his wife’s body into the bridge foundations.

We didn’t have any luck learning how the bridge got its name, but we did find some insight in The bridge of Kremasti, an interesting article written by Perris P. Vougioukas and published in 2015 by the local news and information website Agia Paraskevi Only.

Besides discussing some of the history and legend behind the bridge, Vougioukas provided some dimension statistics that we couldn’t find anywhere else. Like other sources, he noted the Kremasti arch reaches a maximum height of 8.55 meters, but he furnished additional measurement facts: the bridge opening is 14 meters, while the span’s cobblestone walkway extends for approximately 50 meters, and is 3.5 meters wide. 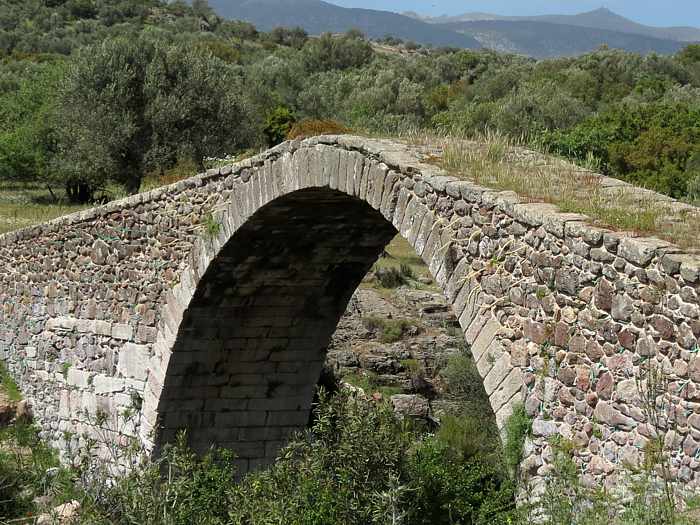 We had been curious about the bridge length because we wanted to know how far into the past we had wobbled along the uneven surface, where weeds and grasses sprout from cracks and spaces between the stones. Unfortunately, we couldn’t cross the entire span — a section of wire fence blocked access to and egress from the north side of the bridge. We didn’t realize this until we were almost all the way up and over the arch, having begun our crossing from the south. Clambering over or around the barricade would have been awkward and unsafe, so we wisely retraced our steps. Although it was a bit disappointing to wind up just one or two steps shy of a complete crossing, we got to spend twice as much time on the bridge, and enjoy the different views in each direction.

(We couldn’t understand why the fence had been installed; there weren’t any signs indicating it was off limits, and none of our tourist guides warned that walking on the bridge was either unsafe or not permitted. We wondered if the owners of the olive grove simply didn’t want people like us ambling around their trees or having picnics on their property! Or perhaps they had blocked the path to prevent their sheep or goats from crossing onto the bridge and possibly falling into the stream. If any of our readers know the answer, please share it with us!) 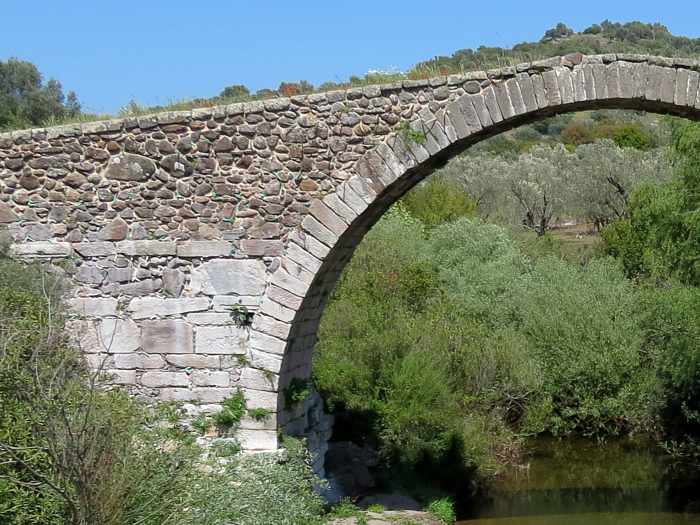 Our visit to Kremasti bridge took place during a day-long drive to explore sights and villages in northern Lesvos. We also could have seen the bridge by walking, since there are well-established trekking routes in the area, but we chose to leave long hikes for our next trip to Lesvos. For any of our readers who might be interested in such a scenic walk during an upcoming trip to Lesvos, here are links we had bookmarked for two websites that provide detailed directions for walking routes that pass the bridge:

♦ Walking in the valley of Tsiknias on the Trekking Trails Network of Lesvos website; and

♦ the Napi – Kremasti bridge route on the AllTrails website

Below are a few more of our photos of the bridge and its surroundings: 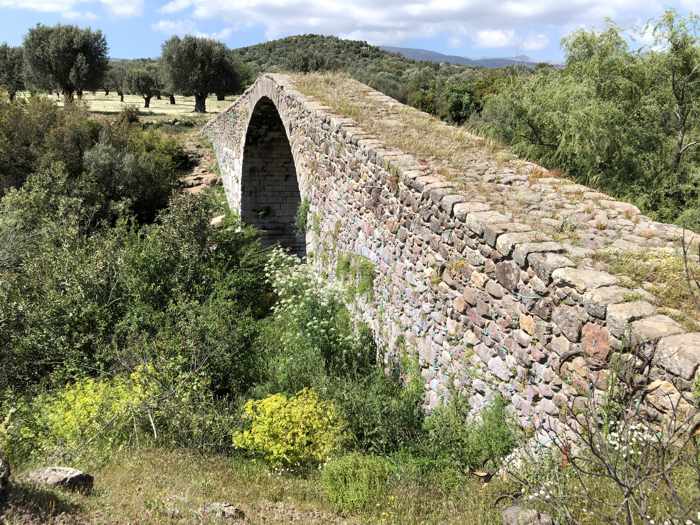 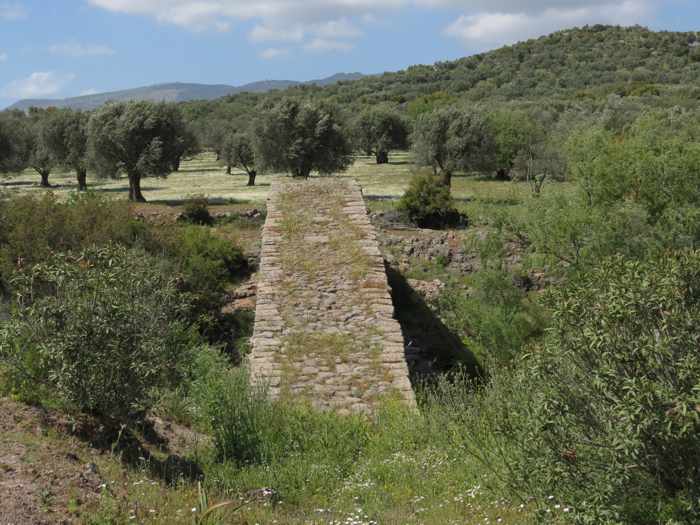 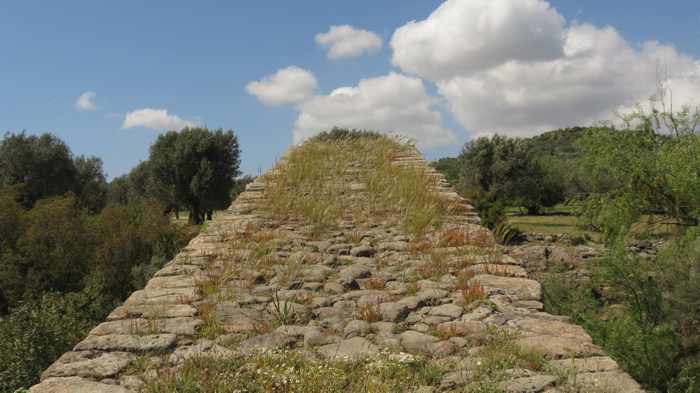 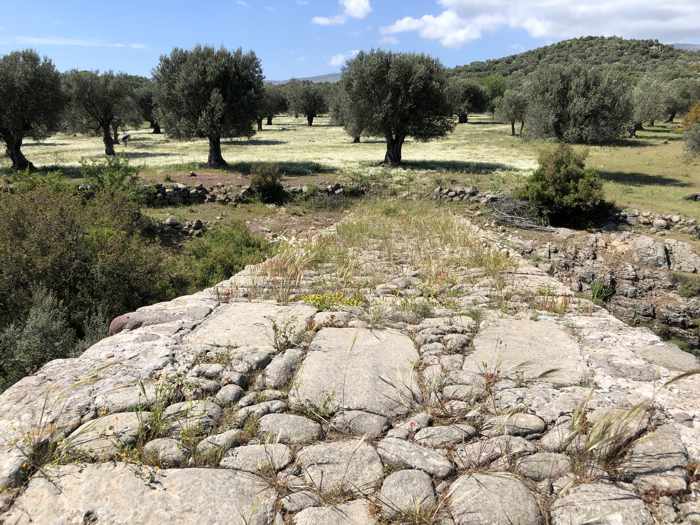 The view toward the olive tree grove at the north end of the bridge. Even from this point, we couldn’t see the thin wire fence that blocks access to the grove. 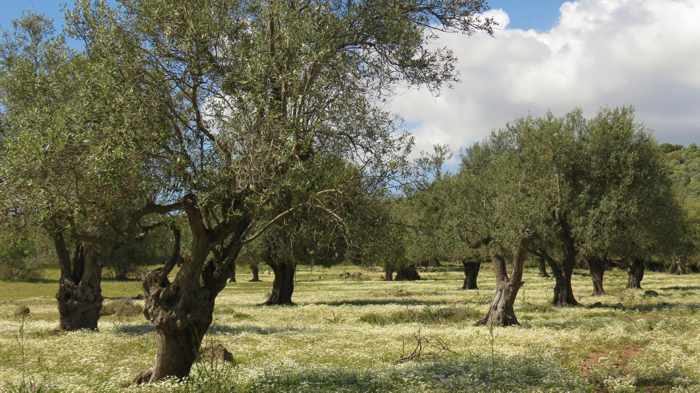 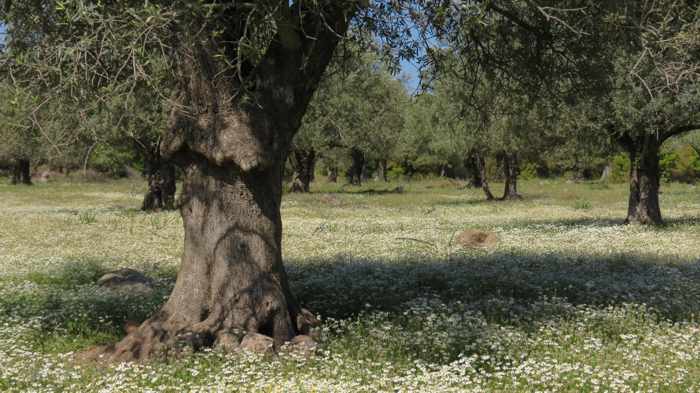 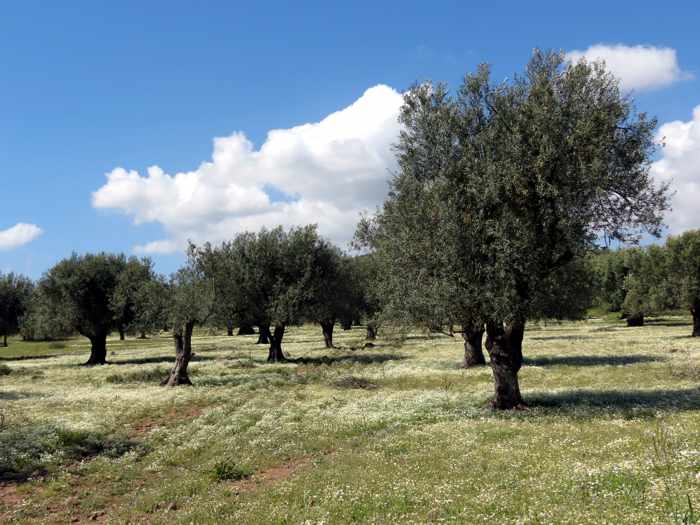 The three photos above show views of the olive tree grove at the north end of the bridge. The ground was carpeted with tiny white spring flowers. 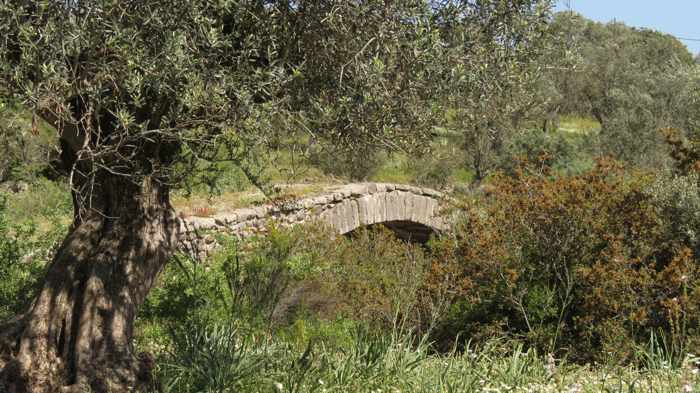 From the edge of the olive grove, a glimpse of the bridge’s arch 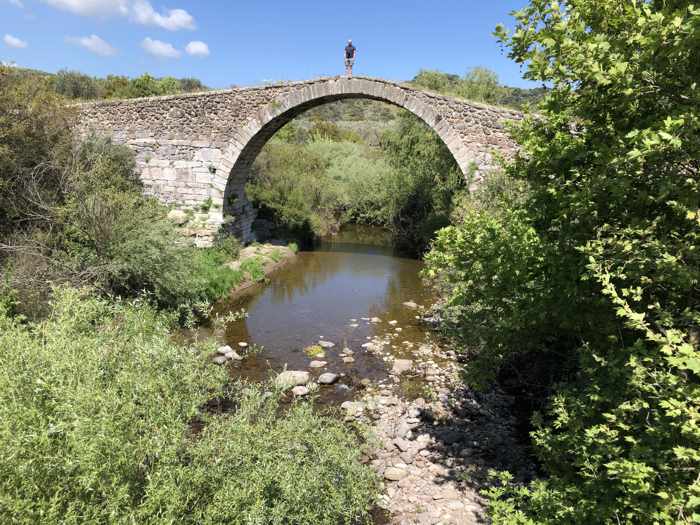 The stream beneath the bridge is a tributary of the Tsiknias River, which flows into the Gulf of Kalloni 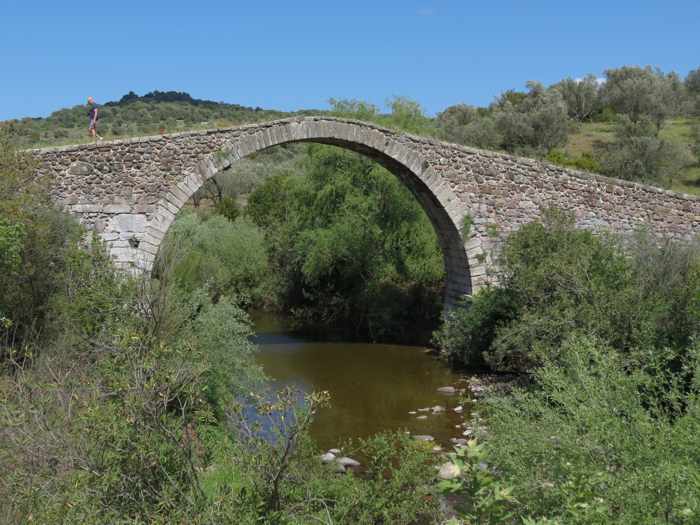 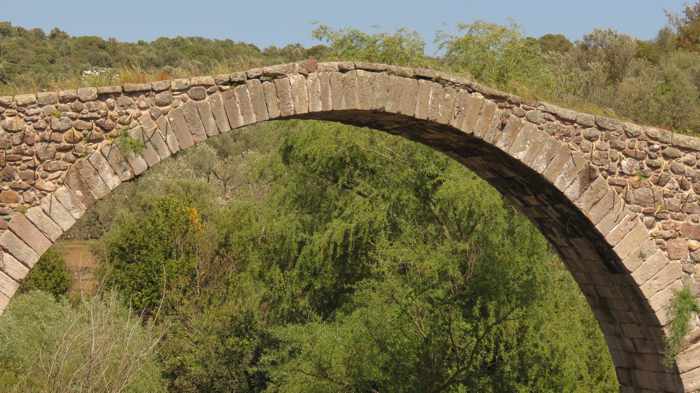 Above: two views of the arched stone span 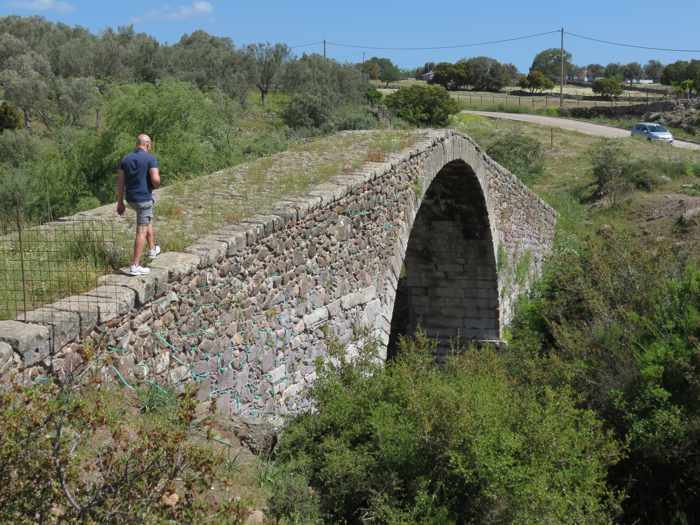 The wire fence that blocks passage at the north end of the bridge is partially visible in this photo. 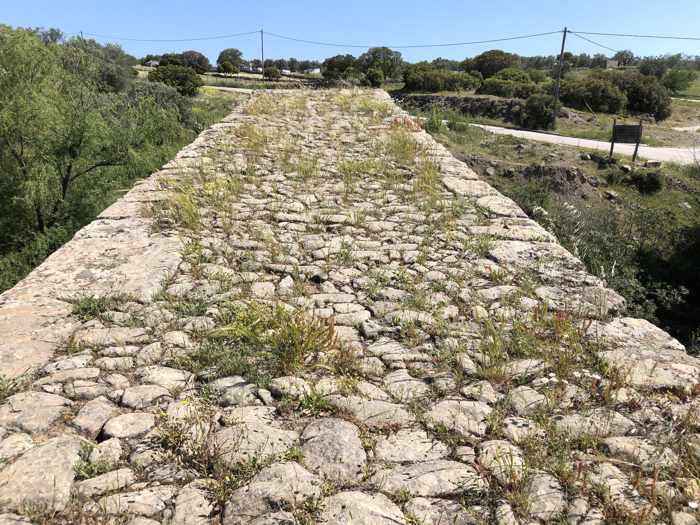 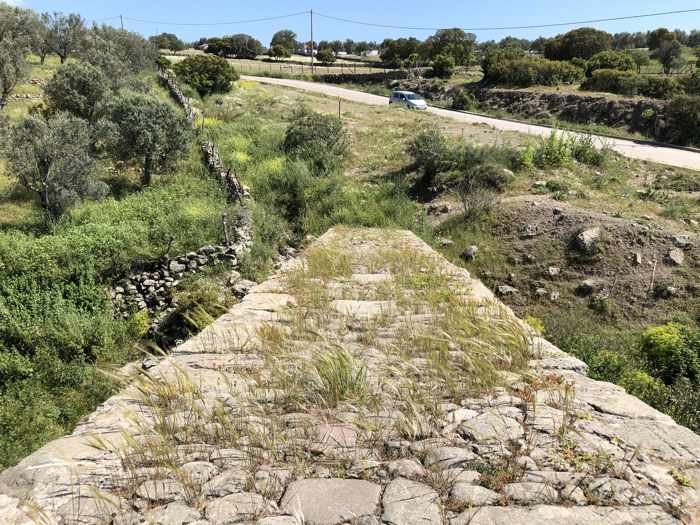 Above: two views during our walk back to the southern end of the bridge 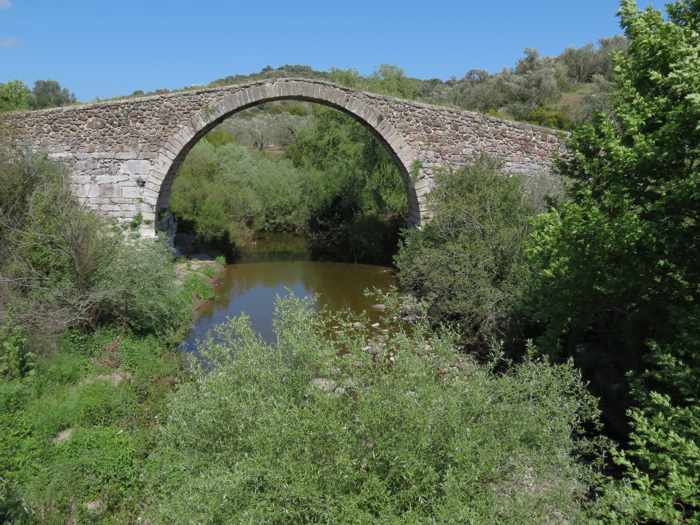 One final look at Kremasti, seen from the modern bridge that carries motor vehicle traffic across the stream

Where to go in Greece: 9 Dodecanese island gems