A modern bridge & ancient boat track at the Corinth Canal

During a daytrip from nearby Loutraki, we crossed a submersible bridge on the Corinth Canal to see the Diolkos, an ancient boat slipway 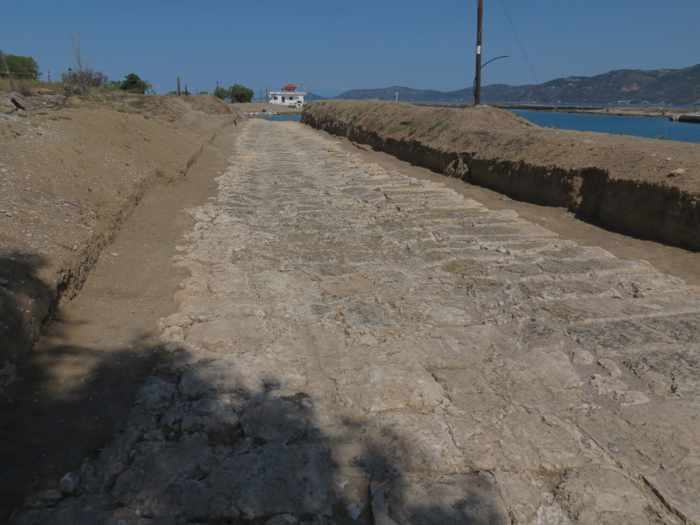 Looking along a section of the ancient Diolkos track, a stone-paved slipway once used to move boats overland across the Isthmus of Corinth. This section of the historic track is situated only a few meters from the edge of the Corinth Canal, which is partly visible in the upper right corner of the photo.

Marvels of maritime travel & transport: We have seen — and driven over — the world-famous Corinth Canal numerous times, but this daytrip marked our first opportunity to cross the 129-year-old waterway on a submersible bridge, something we never even knew existed. (Our previous canal crossings had been on the regional motorway and local road bridge, the same routes on which most tourists pass over the historic canal in excursion buses or rental vehicles.)

Another first, for us, was seeing a remarkable unearthed section of an overland track that was used to move cargo ships for hundreds of years long before the canal was constructed.

The Diolkos is a stone-paved road that enabled boats and transport ships to cross the Isthmus of Corinth — a  6 km wide stretch of flat land separating the Gulf of Corinth to the north from the Saronic Gulf to the south — instead of sailing the substantially longer and potentially perilous sea route off the Peloponnese coast.

This Google map pinpoints the submersible bridge near the Diolkos track, our first stop on a daytrip from the city of Loutraki to several historic attractions in the Corinth area of the Peloponnese 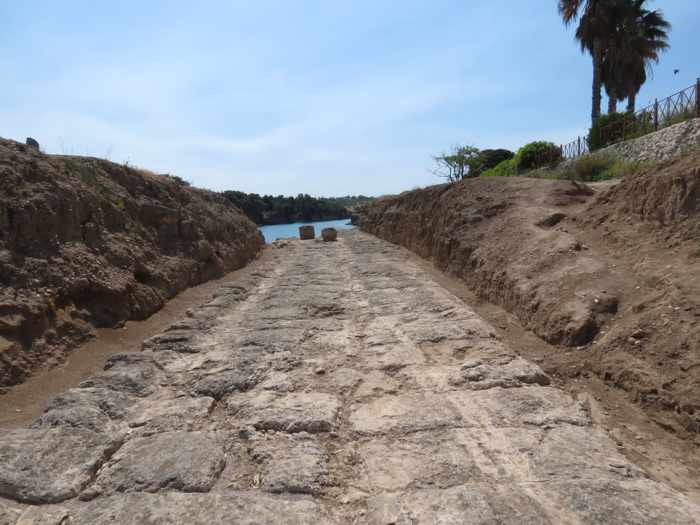 A marvel of engineering for its time, the Diolkos is believed to have been constructed in the early years of the 6th Century BCE, and operated from around 650 BCE to 50 CE. The track extended for as long as 8 kilometers between the two gulfs, and varied in width from 4.5 to 6 meters in most places, and up to 10 meters near each gulf coast. Boats would be hauled from the water on wooden rollers, then loaded onto special wheeled vehicles that animals would pull along grooves in the track. To make the load lighter for carriage on the track, the vessel’s cargo would be unloaded and transported to the other gulf separately, by road, while the boat was slowly dragged down the Diolkos. Once the ship was refloated in the gulf on the opposite side of the isthmus, its cargo would be reloaded and the boat would resume its voyage.

The Diolkos was a costly shortcut for shipowners, who paid steep fees for the slipway transit service, and it gradually fell out of favour as sailing firms began acquiring larger ships that could more safely navigate the seas off the Peloponnese.

We felt it was definitely worthwhile making a short stop at the Diolkos to appreciate the ancient engineering achievement and contemplate the incredibly difficult and demanding physical labour that would have been required to move heavy boats along the passageway.

As for that submersible bridge we crossed to reach the Diolkos, we didn’t know how it worked until long after we got home from our trip, when I found a YouTube video which I have posted below.  We had thought it was a type of drawbridge that would swing to one side to let boats pass but, as the video shows, it actually drops deep into the water channel, then quickly rises back into position once ships have entered or exited the canal.

We didn’t get to watch the bridge in action because the canal had been closed to traffic at the time, still undergoing restoration work to repair extensive damage caused by a series of landslides in late 2020 and in 2021. It reopened in July 2022 for a few months of seasonal operations before shutting for a scheduled second phase of repairs that will be performed during the late autumn and winter. 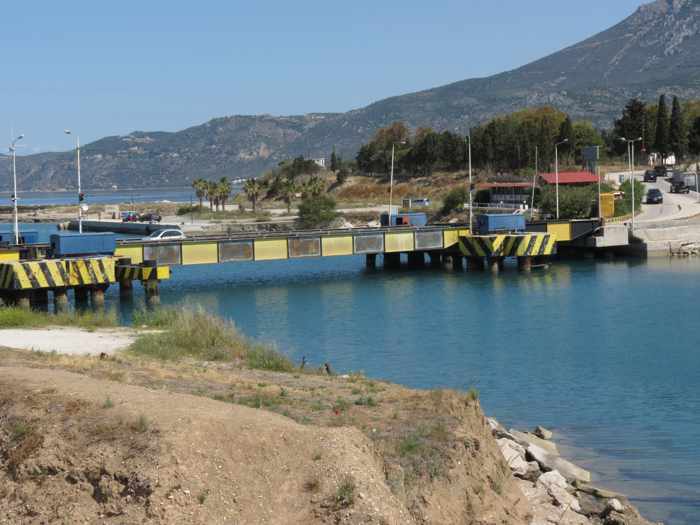 This two-lane vehicle bridge, at the west entrance to the Corinth Canal, submerses to let boats and ships pass through the canal. It’s located close to a segment of the Diolkos trackway. We crossed this bridge en route from Loutraki to the Diolkos track during a May 2022 daytrip in the Peloponnese. Another similar bridge is situated at the east mouth of the canal.

We didn’t get to see, in person, how the submersible bridges at the Corinth Canal work, because the canal had been closed to boat traffic at the time of our visit. But this interesting 3-minute video, by OurTour Blog, shows one of the bridges in operation.

Learn more about the Diolkos and Corinth Canal

For further historic  insights and background information on both the Doilkos track and the Corinth Canal, complete with photos and maps, have a look at these excellent articles:

♦  Corinth Canal Doilkos on Sailing Issues, a website focussed on marine navigation and sailing holidays in Greece, Croatia and Turkey;

♦The Diolkos Trackway In Greece Is An Ancient Relic Of Human Will Power, a story published in June on the website Indie88.com.

♦ The Greek Reporter story Greece’s Corinth Canal closes again until next summer, published October 4, describes the landslides and restoration work that forced the canal to close until July of this year. The report also includes a local news video showing the rockfall damage.

♦ The November 22  feature article The spectacular canal that was 2,500 years in the making. on CNN Travel.

This 3-minute National Geographic video shows stunning aerial views of the canal, including scenes of a large cruise ship navigating the narrow passageway

A visit to Acrocorinth Castle

A daytrip from Loutraki to top historic sites near Corinth