A Greek Gulf from Panos Smirniotis on Vimeo.

Fun flight: While scanning through tweets by some of the people I follow on Twitter, I discovered a real gem of a film clip today — A Greek Gulf, an amazing aerial video by photographer Panos Smirniotis.

The 6-minute clip, which is posted on Vimeo, shows captivating coastal scenery in areas around the southeastern end of the Gulf of Cornith, including the Heraion Lighthouse, the Sanctuary of Hera, and the Vouliagmeni Lagoon in Perachora; the world-famous Corinth Canal; and the beach and resort at Loutraki.

I have seen the Gulf of Corinth a couple of times, but only from jet airplanes cruising thousands of feet high, so it was impossible to notice the delightful scenery passing beneath us. Although the places shown in A Greek Gulf are seen from the air as well, Panos’s camera skimmed closer to earth, capturing gorgeous high-definition views of the water, beaches and coastal landscapes in the Corinthia area.

The uplifting music that accompanies the video is Piano Dream, by Andreas Agiannitopoulos (aka DJ A).

To view the video, click the white arrow at the bottom left corner of the image at the top of this post.

Below is a Google map of Greece, on which I have circled the approximate area in which the film was shot.

I suddenly have an urge to go for a swim in the Vouliagmeni lagoon! 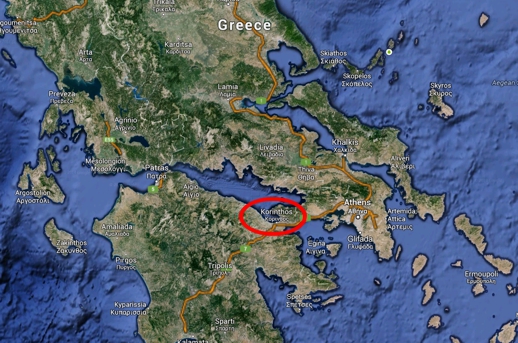