A winter daytrip to Paleochora in southwest Crete

This 9-minute film by  fitness and travel buff William Taudien shows Paleochora, Crete from ground level, in the air, and even under water.

Just a few weeks back, I wrote about a new promotional video that tourism authorities on Crete had produced to encourage more travellers to visit the island in winter.

Since then, I’ve been keeping an eye on social media to watch for current photo and video posts, to get a better feel for what the island is like at this time of year. The latest we have ever been to Crete ourselves was in late October and early November 2017, when the tourist season was wrapping up and most hotels and restaurants were either already closed or shutting down. Despite a few days of inclement weather, we had a great time, but we often wondered how visiting in winter would compare. It seems other people are curious, too — in online travel forums, I’ve noticed an uptick in the number of people asking whether winter travel to Crete and other places in Greece would be worthwhile.

This week I got some answers when adventure traveller, fitness buff and vlogger William Taudien published the video I posted above.

William has been living near the Crete city of Chania for the past three months. In late December, he took a daytrip to Paleochora, a small town on the island’s southwest coast which happened to be the last stop on our late autumn holiday two years ago.

After a bumpy 90-minute bus ride through gorgeous mountain scenery, William arrived at Paleochora to sunny skies and comfortable temperatures in the low 20s Celsius — weather similar to what we had experienced. Conditions were ideal for William to film ground-level video while wandering the streets, the seafront on the east side of town, and beautiful big Pachia Ammos beach to the west, which he had all to himself. With his drone, he captured amazing aerial views of the colourful town, the beach, and the spectacular mountain and Libyan Sea surroundings. He even shot some underwater scenes while swimming and snorkeling.

Everything looked pretty much as it had when we spent three days in Paleochora, with one major difference — as William explains in the video, restaurant options are extremely limited in winter, especially if you’re looking for somewhere to have lunch.

Although he had an enjoyable trip to Paleochora on that particular day, William told me in an email that “It seems like the weather is a bit unstable in the winter.” In fact, right after his daytrip, the weather changed rapidly when a massive storm system that meteorologists named Zenobia swept across Greece, lashing the country with gale-force winds, heavy rains, and snowfalls in some regions. Zenobia pounded Greece for the final four days of 2019, and weather conditions remained unsettled into the first week of the new year.

But conditions improved, and sunshine and mild temperatures returned. In his email, William told me he took another daytrip a few days ago, this time to explore the village of Hora Sfakion on Crete’s southern coast. And, once again, he went swimming. “It was really sunny and nice,” he said.

Now, as I look out my window at gloomy grey skies and the temperature below the freezing mark here in Toronto, I keep daydreaming about paying a winter visit to Chania, and taking daytrips to places like Paleochora and Hora Sfakion if the weather is decent. Definitely something to keep in mind for next winter! 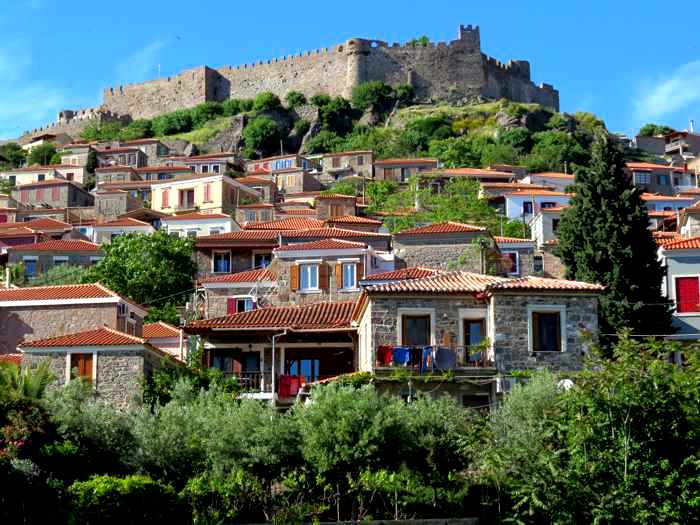 Even though it meant climbing up and down hundreds of stone steps, we couldn’t resist exploring the residential districts that line the steep slopes beneath Molyvos Castle.

My first Moments in Molyvos post included of photos we shot, during our spring 2019 vacation, of sights along on the town’s main road and harbour.

In this instalment, we venture uphill to explore the residential areas situated on the steep slopes that descend from the hilltop Castle of Molyvos to the main road. Photos in this collection include elegant stone houses, villas and hotels; four of the town’s major churches; shops and restaurants lining the cobblestone lanes of the historic market district; a lovely pine-forested park; the municipal cemetery; and occasional scenic views from the hillsides. We will visit the castle in Part 3.

Tile-roofed stone buildings, many of which are centuries-old, cling to the steep hills below the Castle of Molyvos. In this post, we enter the maze of lanes and steps between the buildings to take a closer look at what’s there.

Please click on the link below to continue the photo tour of Molyvos.

Page 2 contains pictures from our walkabouts in the town’s traditional market and surrounding neighbourhood, while

Page 3 features photos of our walks on the hillsides below Molyvos Castle.

Page 4 has pictures from our walks on the hills northwest of the castle, high above the harbour.

Moments in Molyvos: Sights & scenes from the marvellous castle town on Lesvos island 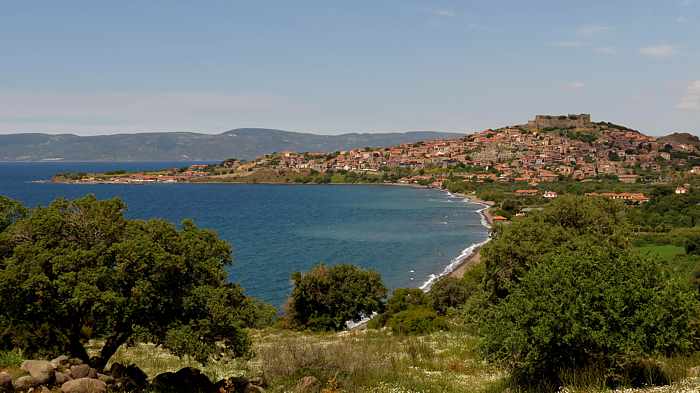 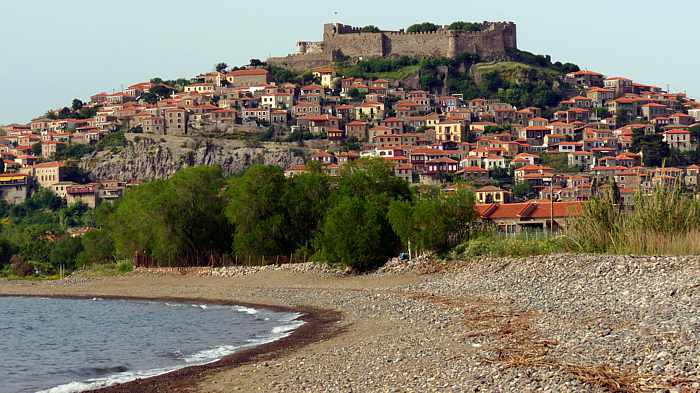 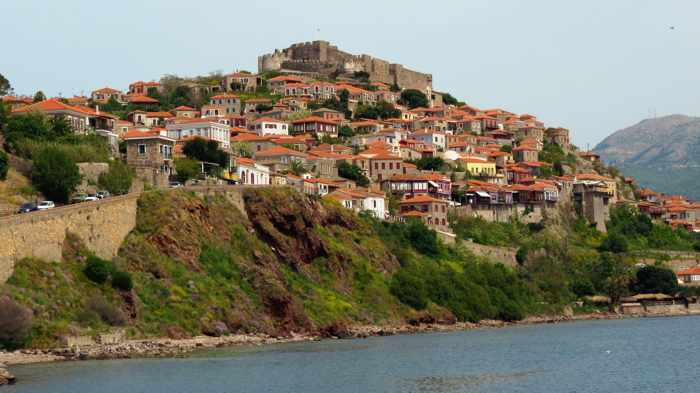 Views of Molyvos from a highway lookout point two kilometers south (top), from the local beach (center) and from the harbour jetty (bottom). Also known as Mithimna, the town is situated near the northern tip of Lesvos, and is one of the island’s premier attractions and visitor destinations.

Cobblestone streets and lanes. Elegant stone and wood buildings with red-tiled roofs. Cozy cafes, bustling bars and traditional tavernas. Charming shops, chapels and churches. A picturesque fishing boat harbour and a long sandy beach. Byzantine and Ottoman-era historical influences. An imposing hilltop castle. Lovely views of the Lesvos coastline and the Northeast Aegean Sea, plus parts of the nearby Çanakkale province of northwest Turkey. Molyvos has all this and more — everything you’d expect from a town that dates back to 700 B.C.

This year, we visited Lesvos, and spent the first half of our island holiday — 8 full days and nights — at Molyvos. Initially, we were concerned this might be too long, but friends and regular Lesvos visitors assured us we wouldn’t get bored.  They were right, of course:  Molyvos suited us to a T. Its sublime natural and architectural beauty, comfortable atmosphere, historic character and friendly locals quickly showed us why Molvyos has legions of fans who faithfully return year after year. Molyvos has such an alluring charm, you just can’t help but fall in love with it.

If you haven’t been to Molyvos before, my collection of photos on page 2 of this post will give you a good impression of what you could expect to see while wandering around this marvellous town.

Please click on the link below to begin your tour of Molyvos!

“Let me guess — I bet you are thinking you would rather be in Greece right now.”

That’s what a friend remarked when he saw me gazing wistfully out the windows at our gym as snow fell over downtown Toronto today — our second major winter storm in less than a week.  At daybreak, the neighbourhood had looked lovely under a blanket of wet snow, but morning rush hour traffic had turned the streets and sidewalks below us into a sloppy mess of puddles and dirty slush. Meanwhile, the snow on rooftops, trees and gardens had already lost its crisp white brilliance as a grimy film of brownish-grey dust from traffic, construction and air pollution started to settle on its surface.  My friend was right: I wasn’t looking forward to the wet slog home after my workout.

“Yes, I really do wish that I could be in Greece right now instead of here,” I replied. “I would much rather be in Kastoria when it’s snowy.”

Although my friend  has travelled to a few island and mainland destinations in Greece, he didn’t recognize Kastoria by name and wanted me to tell him more about it — as well as why I would be happy to travel there in off season.

I explained that Kastoria is a small city situated in northern Greece, nearly 600 kilometers northwest of Athens. Internationally famous for its centuries-old fur garment industry, the city is built on hillsides overlooking Lake Orestiada. One of the city’s top attractions is a pedestrian promenade that extends along the lake shore, offering panoramic views of the nearby Grammos and Vitsi mountains. I haven’t been to Kastoria myself yet (it’s on my bucket list), but I have seen plenty of photos and videos, and know I would enjoy strolling the lakeside path to see the beautiful fall colours or admire the snowy winter vistas.

“It would be so much prettier than here,” I said. “Kastoria looks like something you would see on a Christmas greeting card.”

“You must show me pictures of it sometime,” my friend said. I knew I had bookmarked several Kastoria videos I had watched on YouTube, so I promised that I would share my favourites here on the blog so that he — and any of my readers who also aren’t familiar with the city — could see how beautiful it is, and why it fascinates me so much.

On this page, you can watch two beautiful short films by Studios Trasias of Kastoria; one showing the city with fabulous fall foliage, and the other capturing Kastoria’s wonderful winter scenery. You can see several more short videos on page 2.