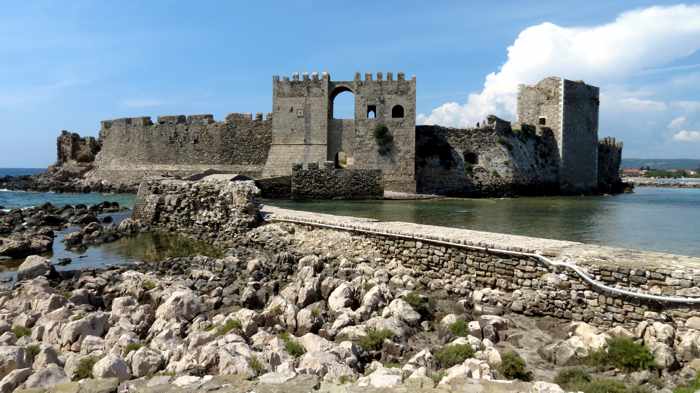 The southern fortification walls of Methoni Castle, viewed from the Venetian-era Bourtzi fortress (below) 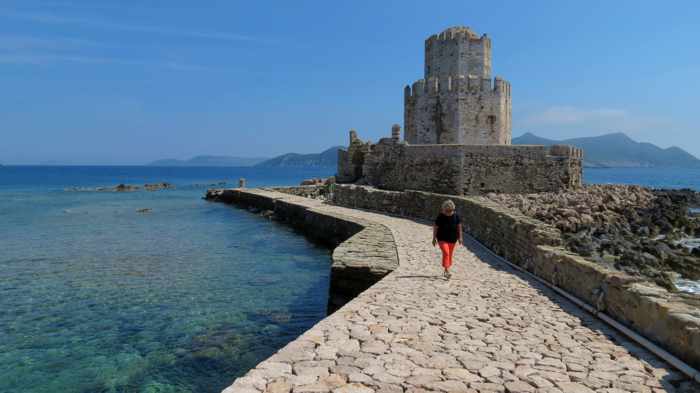 Methoni meanderings: Day 2 of our western Peloponnese road trip turned out to be rather “monumental” for us, figuratively speaking, as our travels took us to churches, archaeological sites and castles — some more than 800 years old — plus a place where two major Greek maritime conflicts occurred.

Our drive to and through hundreds of years of history took us first to the Byzantine Church of Samarina, which dates from the 12th Century, followed by a walk around the ruins of the Castle of Androusa, which was built in the 13th Century.

Next stop was the town of Pylos on Navarino Bay, where two of the most significant naval combats in Greek history took place:  the Battle of Pylos which was fought in July of 425 B.C. during the Peloponnesian War, and the October 20 1827 Battle of Navarino, the most pivotal and decisive event of the Greek War of Independence from Turkey.  Besides observing the bay from a variety of vantage points in and around Pylos, we managed to see some of the exterior fortification walls of the impressive Neocastro (Castle of Pylos), which was built in 1573. Unfortunately, we didn’t have time to go inside to tour the castle interior and see its remarkable hexagonal citadel.

Our final sightseeing stop was the town of Methoni, where we paid an afternoon visit to the majestic Methoni Castle.

Constructed in 1209 by the Venetians, Methoni Castle occupies a sprawling site encompassing nearly 38 hectares.  The castle is so big we couldn’t explore every sector during the two hours we walked around, but we did cover a lot of ground, and managed to see the highlight attractions, including the Bourtzi sea fortress, the Ottoman baths, and the Church of the Metamorphosis Sotiros. (We might have spent more time meandering through the ruins had it not been so sunny and hot.) 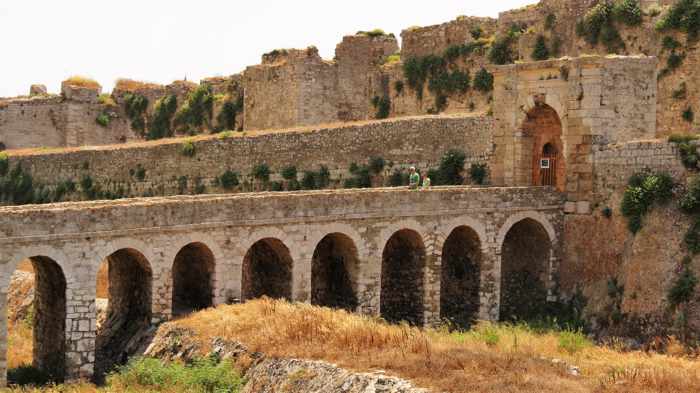 The stone bridge and entrance to Methoni Castle 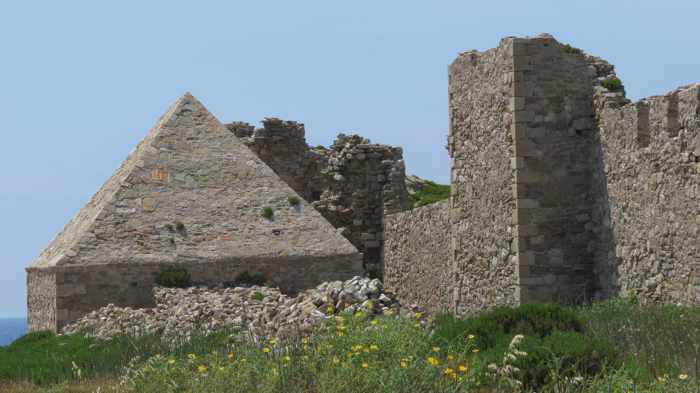 This pyramid-roofed building was apparently used to store munitions. The inner castle wall beside it is crumbling in places, but visitors can still walk on the top to get views of the entire castle site. 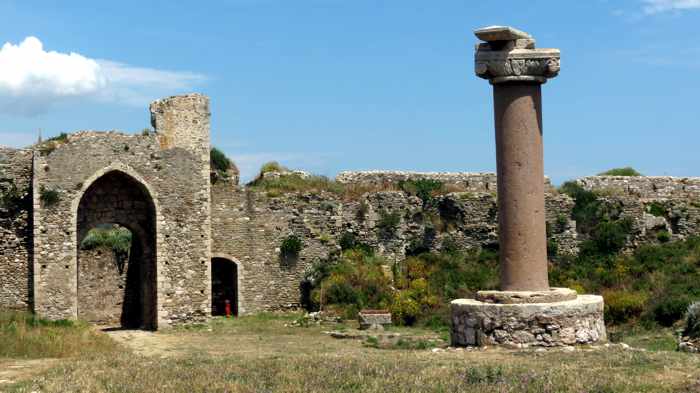 A curiosity inside the castle is a tall, red granite column topped with a Byzantine-style capital. Often called “Morosoni’s Stele,” the column is believed to have been topped with either a sculpture of the winged lion of Venice, or a bust of the Venetian Doge Francesco Morosini. 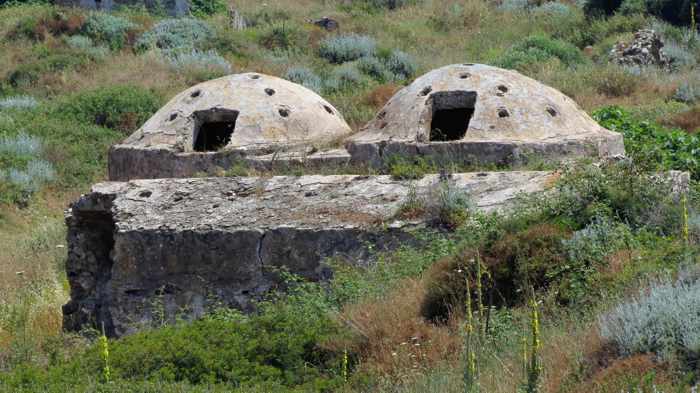 The round, domed roofs of the former Turkish baths (hamam) 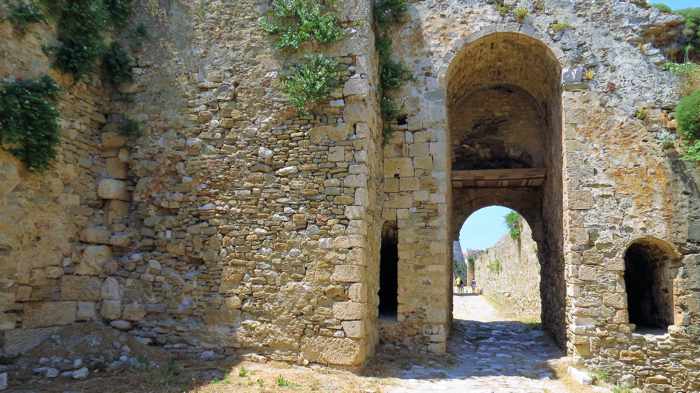 A tall, arched passageway inside the fortification walls 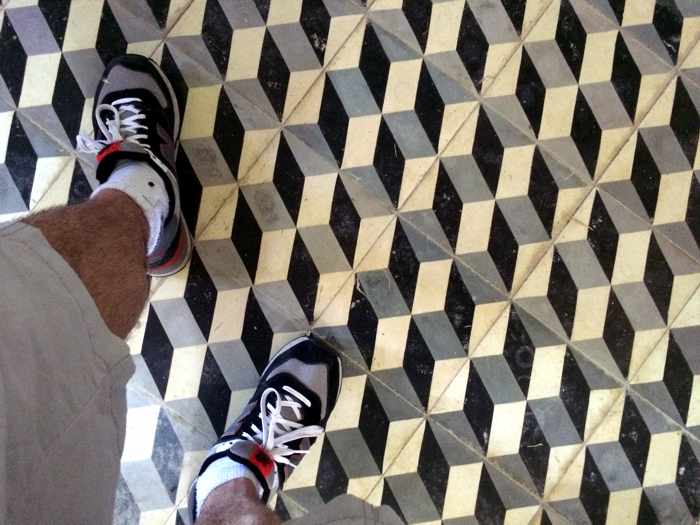 My favourite castle features were the elegant stone entrance bridge (built by the French in 1829 to replace a wooden drawbridge), the Bourtzi fortress, the interior of Metamorphosis church, and the breathtaking 360-degree views from atop one of the main inner walls. I also was fascinated by the variety of shapes and angles that architects had chosen when designing the castle’s imposing fortification walls and the buildings they protected. These included rounded and pointed archways, square and rectangular houses and public buildings, an arsenal with a pyramid-shaped roof, the octagonal Bourtzi fortress, sloped and vertical defensive walls, and the round, spaceship-like domed roofs of the hamam (Turkish baths) built by Ottoman occupiers.

Admission cost only €2 per person, by the way — a bargain, considering the size of the castle.

Below is a brand-new aerial video of Methoni Castle that was published, coincidentally enough, right while I was putting this post together. On page 2 you can view some of the photos we shot while meandering through the ruins. If you’d like to read more about the history of Methoni Castle, click here to read a detailed description from the Kastrologos Castles of Greece website.