We checked out of the Lianos Village Hotel and called for a taxi, which arrived shortly past noon. About 15 minutes later the driver dropped us off at the ferry quay, leaving us nearly 40 minutes to kill before our scheduled 1:05 p.m. departure to Syros on the NEL Lines Aqua Jewel ferry. We soon learned from one of the Naxos port officers that the Aqua Jewel was running about half an hour behind schedule, so we would have to cool our heels even longer than expected. We passed the time chatting with other travellers and taking photos of the port, Naxos Town and the Portara monument, but I kept wishing the boat would arrive so we could get on our way ASAP. I didn’t want to waste time waiting just standing around and waiting in a queue. 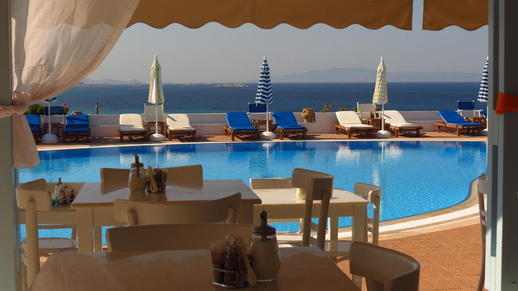 We enjoyed this pool & sea view during our last breakfast at Lianos Village Hotel. We hoped we would have a good view at our next hotel, on Syros.

I shot this panoramic photo of Naxos Town from the port while standing in line for our ferry to Syros. Click here to see the full-size image. 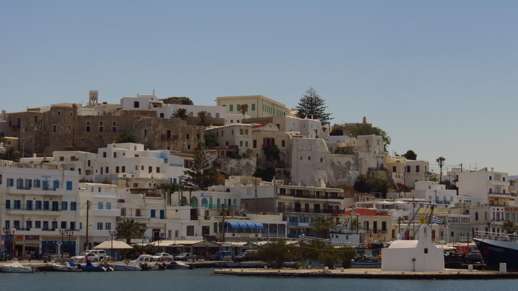 Port view of the Venetian-era Castle, which dominates the Naxos Town skyline 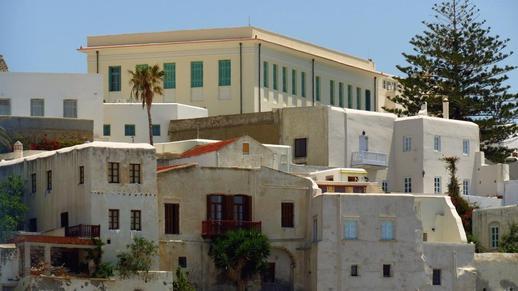 Buildings and trees in the historic Naxos Castle 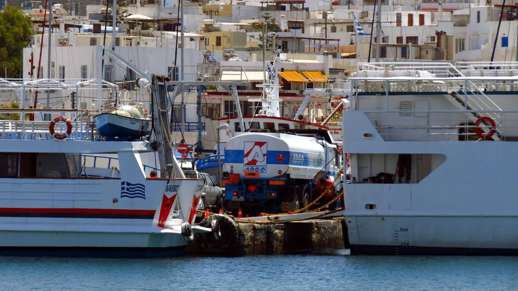 A refuelling truck on the quay near the Naxos Star excursion boat, left, and the Express Skopelitis ferry. The Naxos Star offers day trips to Delos, Mykonos and some of the islands in the Small Cyclades. 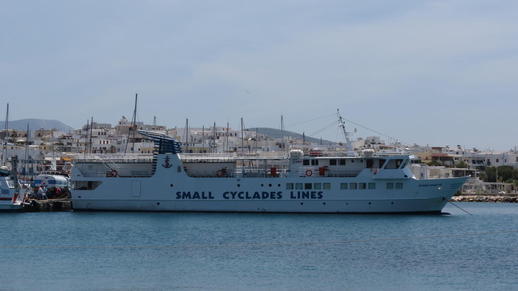 The Express Skopelitis links Naxos to the Small Cyclades islands of Koufonissi, Iraklia, Donoussa and Schinoussa, as well as Amorgos. 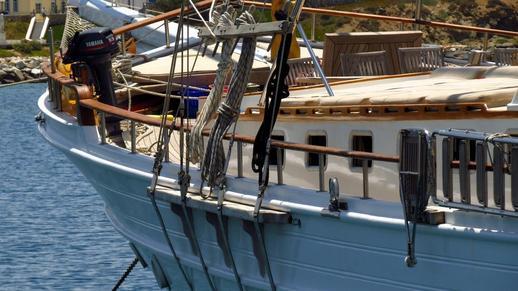 An excursion sailboat docked at the Naxos Port. I saw a group of passengers sitting on the rear deck, drinking wine and ouzo while watching the buzz of activity at the ferry quay, and wondered why they had not sailed to a secluded bay to enjoy their lunch in a quieter scenic location instead. 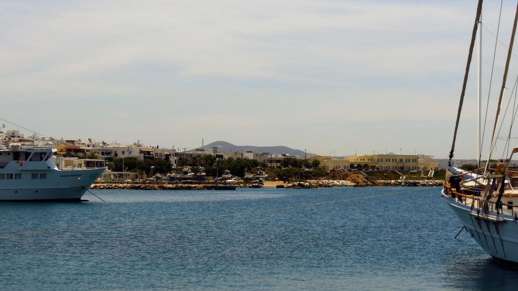 Port view toward the Naxos Town Hall (the large yellow building at center right). At left is the bow of the Express Skopelitis ferry. 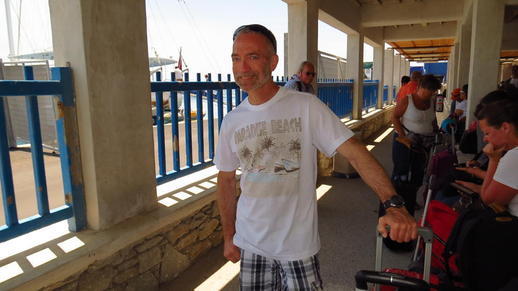 Waiting at the Naxos port in the long passenger “terminal.” It’s the only place on the quay that offers shade — but since it’s usually filled with people puffing on cigarettes, it can feel like a gas chamber to non-smokers. 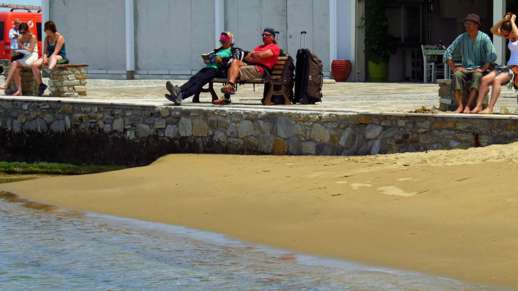 Some ferry travellers prefer to wait along the main street near the port, either on benches or at some of the nearby cafes and tavernas. We have even seen people take a quick swim at this tiny beach before catching their ferry. 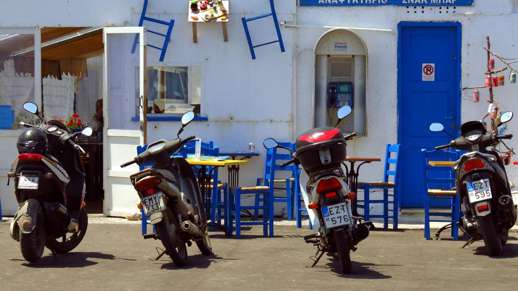 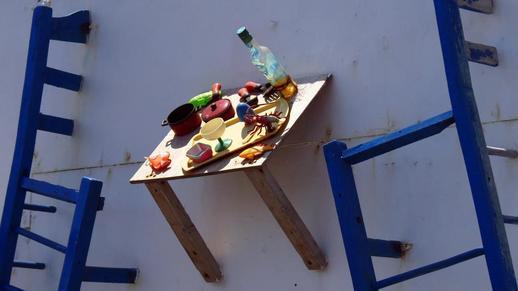 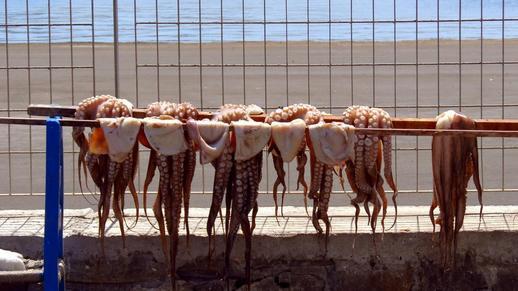 Octopus drying in the sun on racks near the snack bar 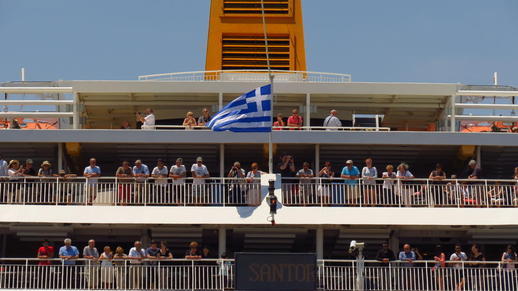 Passengers on the Santorini-bound Blue Star Delos ferry watch as the ship docks at Naxos port. Our ferry, the Aqua Jewel, was supposed to arrive just as the Delos departed, but it was 30 minutes late getting to Naxos. 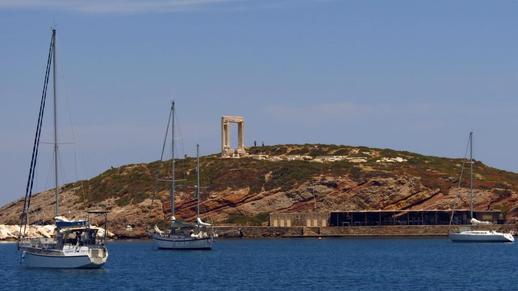 Ferry quay view of the 2,500-year-old Temple of Apollo on the Palatia peninsula next to the port. Also known as The Portara, the monument is a well-recognized symbol of Naxos island. 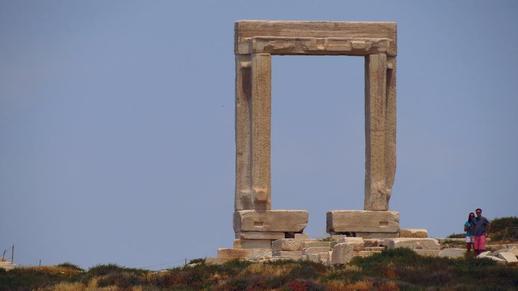 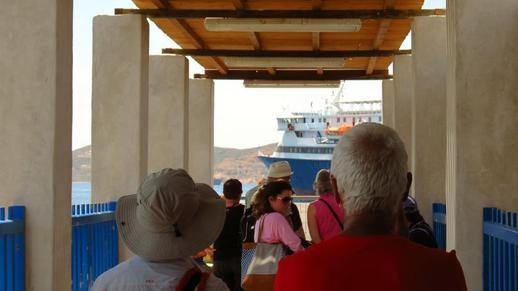 Passengers in the queue watch as the Aqua Jewel maneuvers into docking position at the Naxos ferry port. 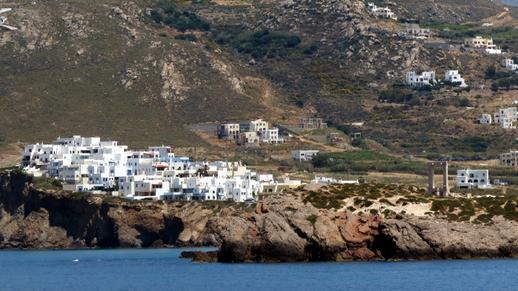 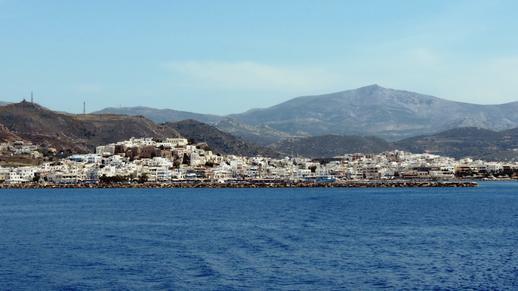 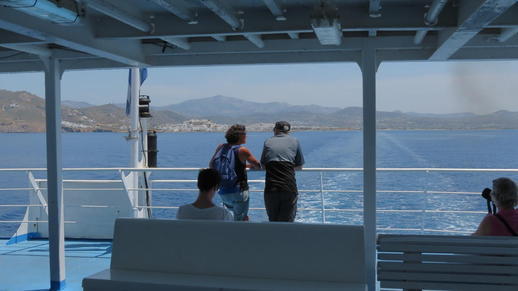 Please click on the link below to continue reading this report.  Page 3 includes more pictures of the Aqua Jewel, along with photos from our ferry port stop at Paros and our arrival at the spectacular port city of Ermoupolis on Syros.