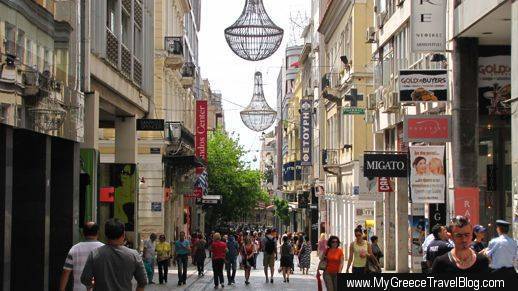 Anarchic and chaotic: “Few visitors have much good to say about the Greek capital: It is busy, chaotic, dingy – a real culture shock when landing from Europe’s tidier, more picturesque cities,” says writer Alexander Besant.

But “Athens is a fascinating city,” he writes in Revel in the chaos of Athens, an article published June 3 on the front page of the travel section in the Globe and Mail, one of Canada’s biggest-circulation newspapers.

“Beyond some of the oldest and most important monuments in the world, [Athens] boasts some of the best cafés on the continent and a nightlife that rivals any of its Mediterranean neighbours. If given a chance, Athens can be enchanting,” Besant observes.

He goes on to recommend where travellers should stay, dine and party, even suggesting specific city districts and attractions that people should visit, including the vibrant Psyrri and Gazi neighbourhoods.

The Guardian newspaper from the U.K. jumped on the Athens bandwagon this week, too, with a June 6 story entitled Athens’ best street food and stalls. Originally published May 23 on the Guardian‘s Culinary Backstreets blog, the piece by Despina Trivolis profiles the city’s two main street foods: koulouri (sesame bread) and hot dogs. The blog boasts an authoritative Athens Food & Restaurant Guide which I highly recommend you check out if you’re planning a trip to the city; it’s packed with interesting articles, news and reviews about food and dining in Athens. 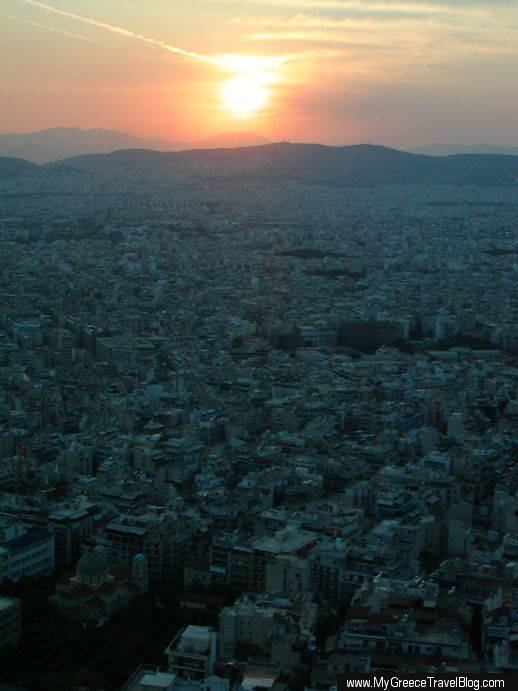 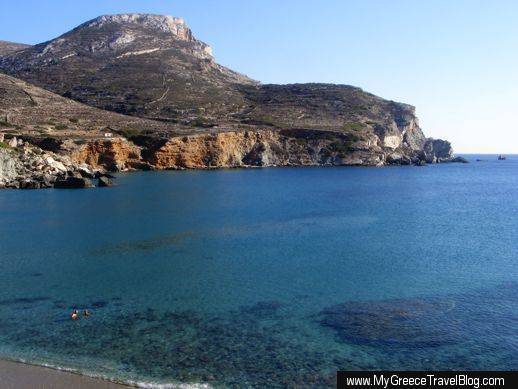 Five gems: I had a chuckle when I read Alexander Besant’s article, 5 Greek islands you haven’t heard of — but need to see, in the May 31 edition of the Globe & Mail.  An editor probably didn’t have frequent Greece travellers like me in mind when she or he wrote the headline — I actually have heard of all five islands, and so far have seen three (each of which I loved and hope to revisit soon).

The first island on Besant’s list is Folegandros, which boasts “a cliff-hanging whitewashed village (known locally as hora), rugged but stunning landscapes and beaches hugging the side of high promontories.” Although it’s one of my favourite islands, I beg to differ with Besant’s claim that it’s a “hidden gem.” Folegandros instantly became a must-see destination in December 2004, when the American edition of Condé Nast Traveler magazine profiled the island with a cover story entitled Greece’s Best-Kept Secret (Until Now). 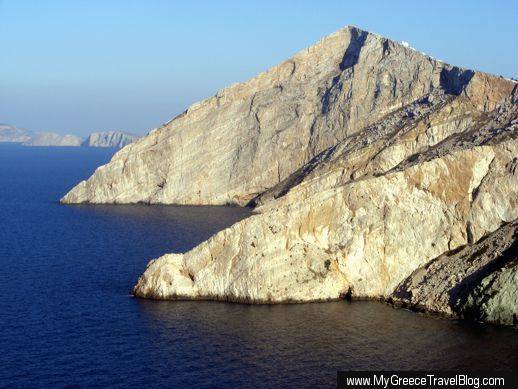 A view of the soaring cliff face on the northeast coast of Folegandros. If you look closely at the top right corner of the photo, you’ll see some of the whitewashed buildings of Chora, the village perched right on the cliff edge (below). 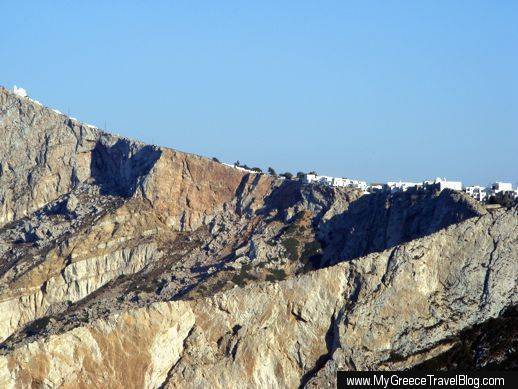 Next on the list is Patmos, which I visited in 2010. As Besant describes, “The island coastline rolls and swirls forming bays and inlets with crystal blue water. Patmos is dominated by the imposing Monastery of St. John the Theologian under which is the cave where John wrote Revelations. The spiritual island has numerous beaches and a surprisingly vibrant nightlife for a place where monks make up a good portion of the population.” 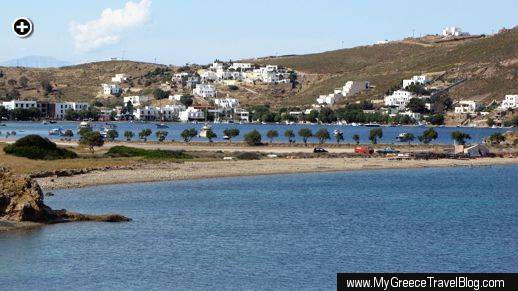 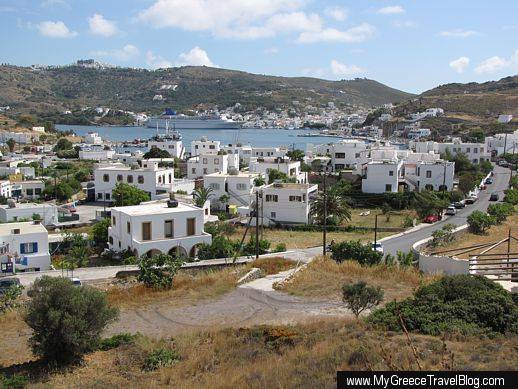 Skala, the port town on Patmos. The island’s top tourist attraction, the Monastery of St. John the Theologian, occupies a prominent hilltop location at upper left

Third on the list is an island I haven’t yet seen — Anafi, which is situated to the east of Santorini. “Those who make the journey,” Besant says, “are rewarded with the island’s remoteness, serene beaches and its enchanting white cubist village that tumbles down from the mountains. The footpaths around the island linking the various settlements make it a perfect place to hike during the early morning or at dusk when the sun is not so strong.” I know it’s a place I’d really enjoy, and I’m anxious to hear back from someone who is supposed to be visiting Anafi this month.

Samos is the fourth island on the list — and another destination I visited in 2010 (right after Patmos). “Stay in the picturesque port of Pythagorio with its shiny cobblestone streets and bustling, popular waterfront,” Besant recommends. “The fish restaurants on the far left of the port are the best. The capital Vathy is mostly devoid of tourists but worth exploring on a Friday night when locals dine and stroll along the harbour where working fishermen (and women) tend to their vessels and string nets.” We actually stayed in Vathy as well as in a nearby resort area called Kalami, and found the city worth exploring any day of the week. Next time we visit Samos, we’ll probably stay in or near Pythagorio. 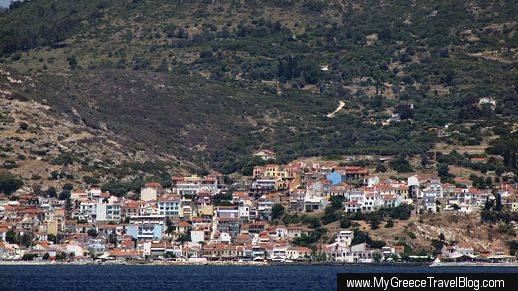 Approaching Pythagorio, one of three port towns on mountainous Samos 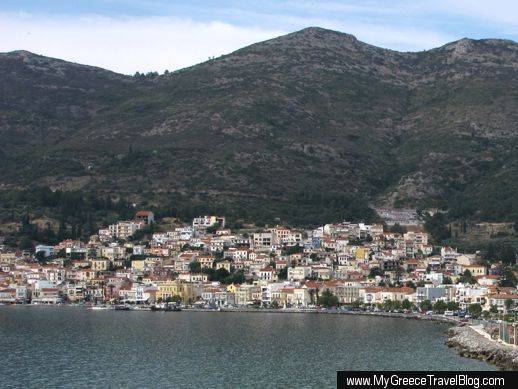 Vathy is the main commercial center on Samos 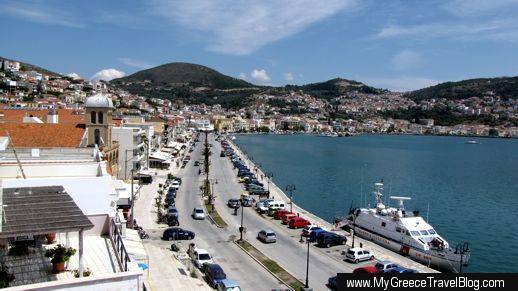 Looking along the waterfront boulevard in Vathy 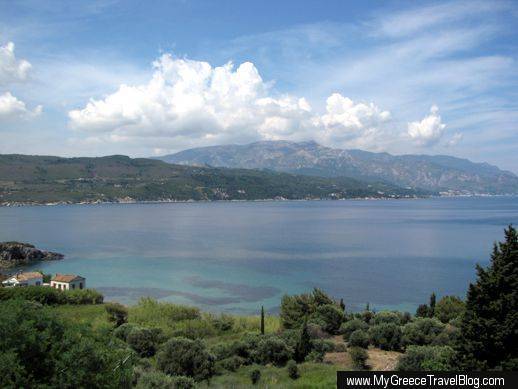 Fifth on the list is Samothraki, which I haven’t yet visited. Besant writes that Samothraki is “is lush and mountainous with hidden waterfalls and tropical vegetation. Towering Mount Fengari hovers like a dark cloud over the north Aegean from the Greek mainland and offers impressive views – if you’re up for a hike. The island is also home to the Sanctuary of the Great Gods, a pre-Hellenic and Hellenic historical site where the famous Winged Victory of Samothrace statue, now in the Louvre, once stood.”

Other newspaper articles have focussed on specific Greek destinations, as well as travel tips from people knowledgeable about Greece.

A May 23 article in the Guardian profiles “an idyllic yoga retreat” on Silver Island, a private islet situated near Evia just off the Greece mainland. The Silver Island Yoga retreat accepts only 12 guests per week, but groups of 8 or more can make arrangements to rent the island for their own private use.

On May 10, the U.K.’s The Telegraph published Sailing in Greece: Dodecanese islands, an article in which writer Claire Mann described her family sailing holiday to the Dodecanese islands of Rhodes, Symi, Tilos, Chalki, and Nisyros.

And on May 18, The Telegraph published Readers’ tips: The Greek Islands, with advice about hiking to Mount Zeus on Naxos island, planning ferry travel, visiting Shipwreck Cove on Zakynthos (also known as Zante), must-see destinations on Lesvos, and more.

There’s a wealth of valuable information in each of the articles I’ve described, so be sure to click on the links and give them a read. 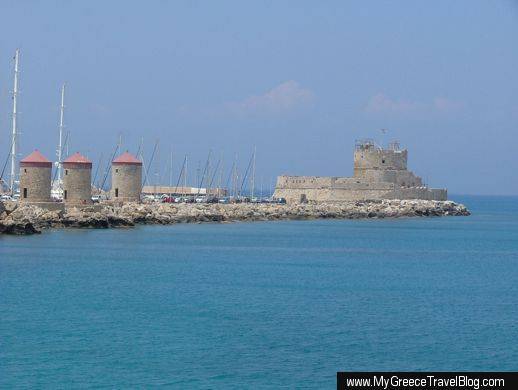 A Venetian fortress and three windmills stand next to the Mandraki marina at Rhodes Town on Rhodes. This was the starting point for a Dodecanese islands sailing holiday described in an article published in The Telegraph.