Because it’s so secluded, Kolitsani is popular with nudists — or so we were told. But when we went there on May 22, the only naked person in sight was a rather rotund woman in her late 50s whose preferred sunbathing position was flat on her back with her knees bent and legs spread wide apart. (We got an eyeful of a female body part that normally doesn’t see sunshine when we walked around the big boulder to get to the sandy part of the beach and discovered her laying on a towel, privates on full display in our direction!)

Three other people were sunbathing on the beach, and about half a dozen more — a group of men and women in their 20s and early 30s — arrived from Mylopotas by kayak to take a brief swim in the warm clear water before heading back. One of the guys had a distinct Aussie accent while two of the young women sounded like they were from the northeastern USA, but insisted they were German. Some of them were working for the summer at one of the Mylopotas water sports facilities; they said they liked to kayak to Kolitsani for a quick swim every day during their afternoon break.

What struck us most about Kolitsani beach was the calm and quiet — there was absolutely no music and no roaring boat or vehicle motors (like at Mylopotas), just the occasional laugh or water splash from someone taking a dip.  Even the kayakers glided away almost imperceptibly; I didn’t notice some had left the beach until I glanced out to sea and saw them paddling near the mouth of the bay.

I’ll remember Kolitsani as a great spot to chill out and enjoy the sun and sea, away from people and noise yet within convenient hiking distance of Chora.

Below is a series of photos of Kolitsani bay and beach: 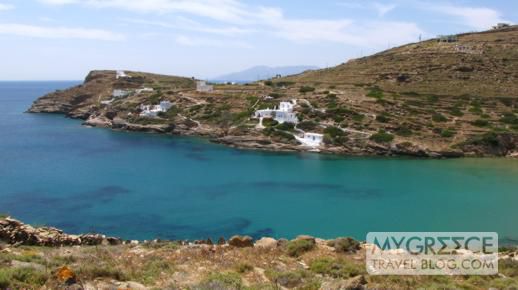 Overlooking Kolitsani bay from a trail on the mountainside 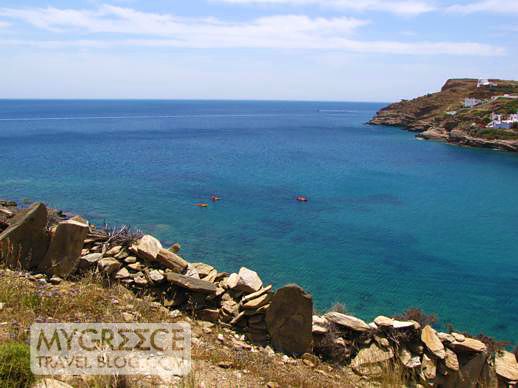 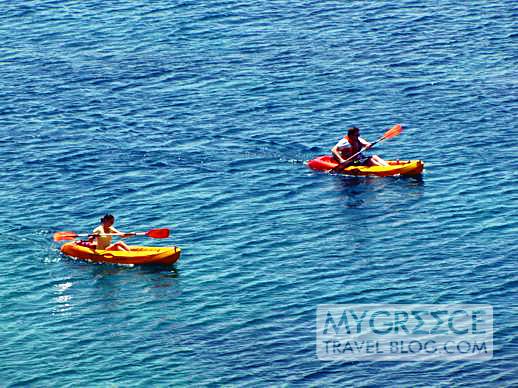 Two of the kayakers paddle toward Kolitsani beach 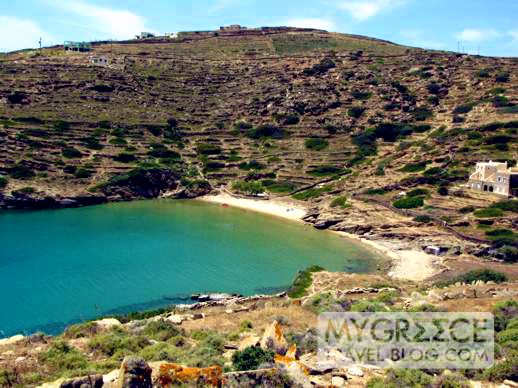 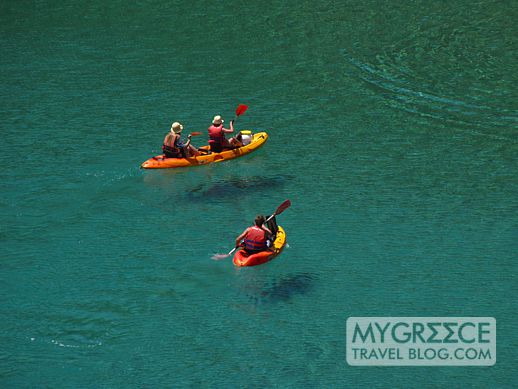 Three more kayakers paddling down the bay toward the beach 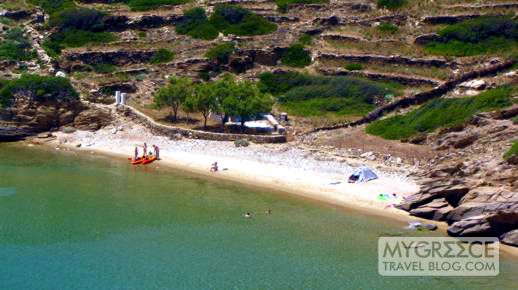 There’s only half a dozen people enjoying the calm, secluded beach 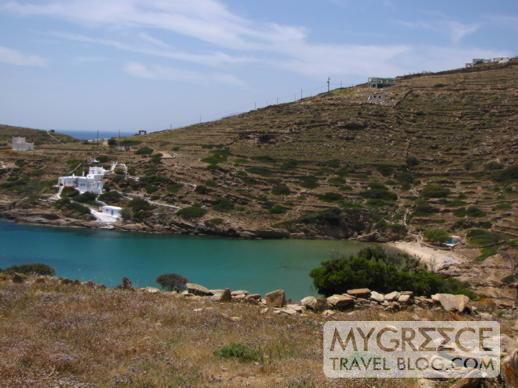 Another view of the beach and bay from the mountain trail 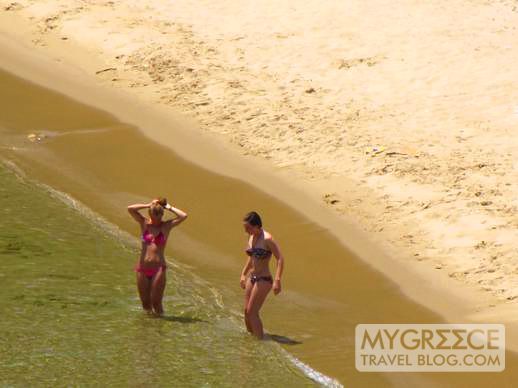 Wading into the warm, clear water from the soft sand section of the beach 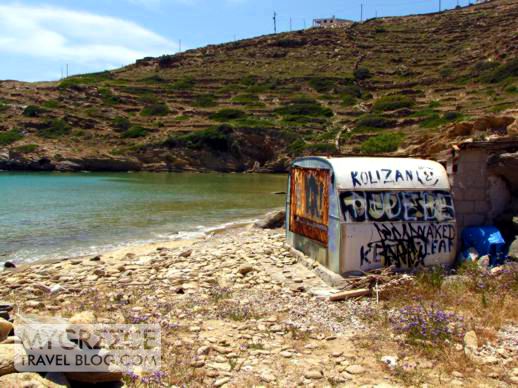 A trailer covered in graffiti on the rocky section of Kolitsani beach. I suspect it’s a beach bar or snack bar that operates during the main tourist season. 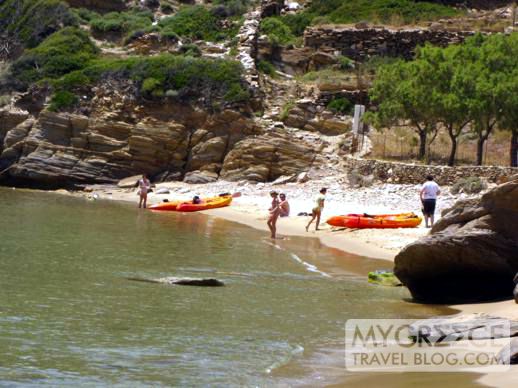 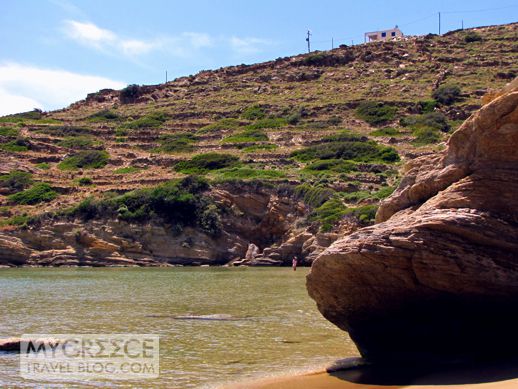 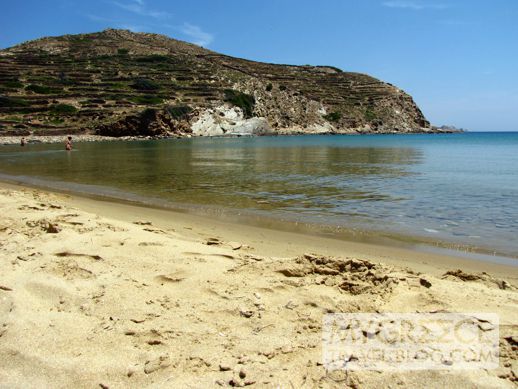 We hiked down the mountain to reach the beach, but a valley trail is a much easier route to walk (we took it to get back up to Chora) 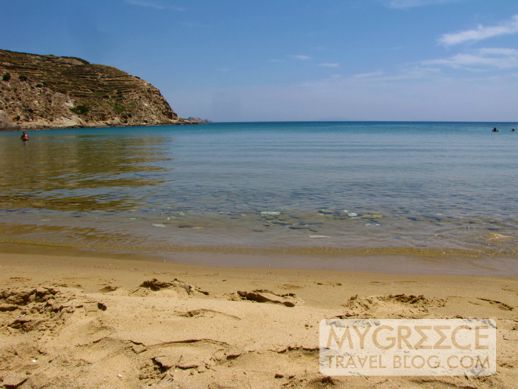 Looking out to sea from the sandy side of the beach