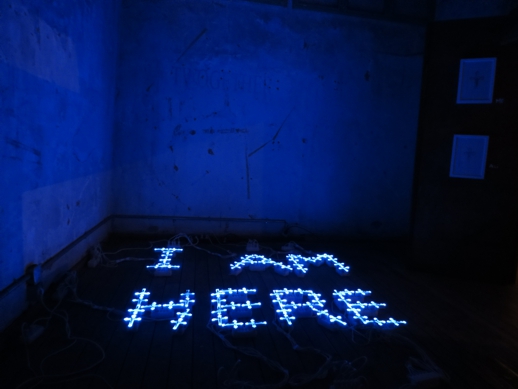 An art installation in one of the cool gallery spaces at metamatic: taf

Cool spaces: If you’d like to have a coffee or drink in a cool and truly unique setting, and have the opportunity to view contemporary art exhibitions at the same time, make plans to visit metamatic: taf (formerly called TAF: The Art Foundation) next time you’re in Athens.

One of the most fascinating cultural venues we’ve ever seen, metamatic: taf is an incredibly innovative multi-purpose facility that features cool gallery and performance art spaces along with a fabulous courtyard-café bar that received praise in the New York Times Magazine last year.

metamatic: taf is secluded inside a rustic old building at 5 Normanou Street in the Monastiraki flea market neighbourhood of Athens, and is so inconspicuous from the dingy, dark street that it’s almost hard to believe more than 200,000 people visit each year. Until you see what’s inside.

Our friend promised to show us something amazing

A friend showed us the place last October while we were on our way to a birthday party in the nearby Psirri neighbourhood. Leading us along a series of dark and narrow cobblestone streets, she promised there was something “amazing” that we just had to see while we were in the area. (Of course, we couldn’t help but wonder where the heck she was taking us, since the streets were practically vacant and everything appeared to be locked up tight.)

We had absolutely no idea what to expect when we stepped through a pair of wrought iron doors into a stone-walled, ground-level room that was almost empty.  The room had a few pieces of furniture, including two televisions that were both turned on, one displaying the words “super cool” above an image of a ceramic owl. We walked up a flight of stairs, turned a corner and found ourselves on a walkway overlooking the impressive courtyard café. I distinctly remember saying “Wow!” and thinking what a great place it would be to have a drink.

Our friend led us down the walkway, where windows and doors offered views into rooms housing a variety of interesting and provocative contemporary art installations. The works reminded me of art projects we had seen during some of the annual Nuit Blanche events back home in Toronto. After we spent a short period of time checking out the art displays, our friend led us through the courtyard — which was buzzing with dozens of people enjoying conversation over wine, beer and cocktails — and eventually back out to the street.

Look for a small, illuminated logo next to a doorway

When I asked “how the heck would anyone even know how to find this place,” our friend pointed to a small illuminated metamatic: taf logo on the wall next to the entrance gate. If we had been trying to find the place on our own, I think we probably would have walked past without even seeing the sign. Of course, it was obvious once it was pointed out to us.

Unfortunately, we didn’t have time to stay for a drink and enjoy the atmosphere because we had to join other friends for a birthday dinner celebration at a taverna. But next time we’re in Athens, we’ll see if we can find our way back.

If you need to be convinced that metamatic: taf is worth a visit, consider that it got good press in the New York Times Magazine. The magazine’s April 7 2013 food and drink edition included the feature A World of Secret Watering Holes, in which overseas-based New York Times reporters described “their most memorable drinking spots.” Correspondent Rachel Donadio’s pick for Athens reads: “It’s on a gritty street in downtown Athens, under the shadow of the Acropolis. At night, you have to wander through a shuttered flea market to find it. But inside, the Art Foundation, or TAF, is a hidden garden — a courtyard where trees are strung with lights; an oasis, young and alive.”

You can obtain more information about the venue and its events by visiting the metamatic: taf Facebook page. 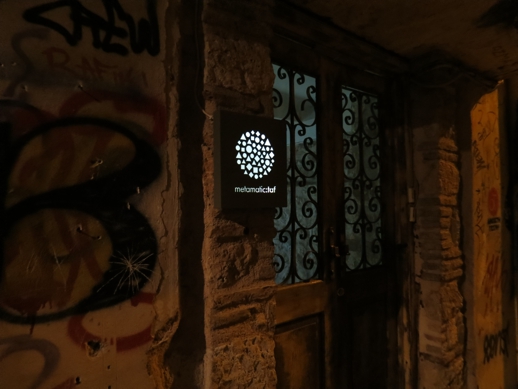 A small illuminated logo marks the location of the entrance to the metamatic: taf galleries and café-bar at 5 Normanou Street 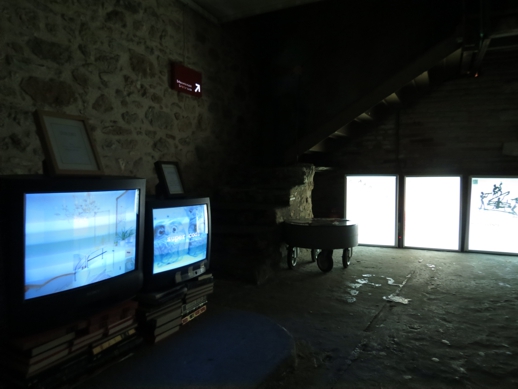 Televisions we saw inside the gallery & café entrance 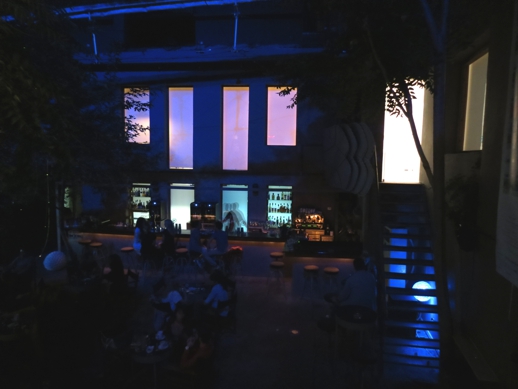 The cozy courtyard café and bar 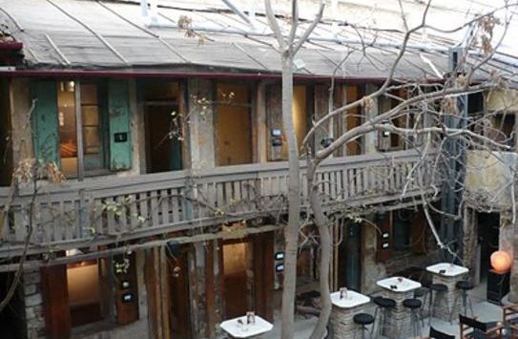 A daytime view of the café courtyard. I found this photo on the metamatic: taf blog. The gallery and performance spaces are contained in the two level structure that encloses the courtyard. The rickety building looks like it’s ready to crumble, but its dishevelled appearance enhances the courtyard’s ambience and atmosphere, thanks to the café’s subtle nighttime lighting.