Spectacular, out of this world Sarakiniko beach on Milos island 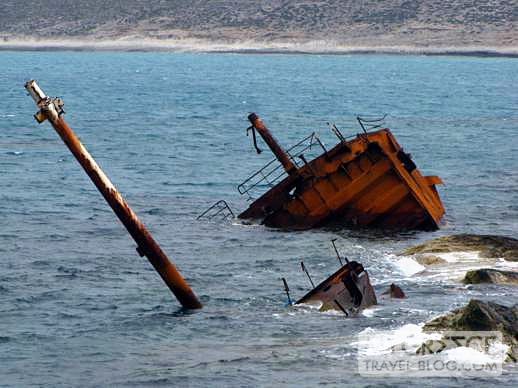 Sublime topography, mine tunnels and a shipwreck

There’s more than just sunbathing and swimming to keep Sarakiniko’s visitors entertained. Besides the striking, sublime topography, there’s a warren of abandoned mine caves and tunnels accessible from the narrow gorge behind the beach, and even a rusty shipwreck on the rugged coast.

However, getting to Sarakiniko can be a bit of a challenge if you don’t rent a car or motorbike while you’re visiting Milos. When we went to Sarakiniko on May 26 last year, there was limited bus service to the beach from the port town of Adamas — only two scheduled bus trips, in fact, at 11 a.m. and 1 p.m. (those buses returned from the beach at 11:10 and 1:10 respectively). We actually walked to Sarakiniko from our hotel in Plaka, and had planned to catch the bus to Adamas instead of making the long trek there on foot. But the 1 o’clock bus never showed up. Luckily, two congenial German tourists offered us a lift to town in their rental car, so we didn’t have to make the gruelling walk up the long hill from Sarakiniko to the main road to Adamas. (We did pass a few other people who were heading back on foot, though, once they realized the bus wasn’t coming.)

Below are more photos of Sarakiniko. If you would like to see even more, check out my Milos 2011: Sarakiniko album on the mygreecetravelblog.com Facebook page. (You don’t have to sign up for Facebook to view the pictures.) 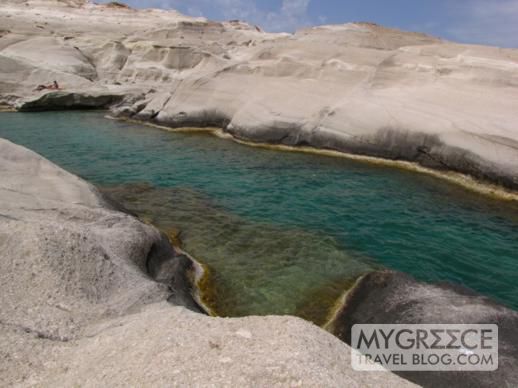 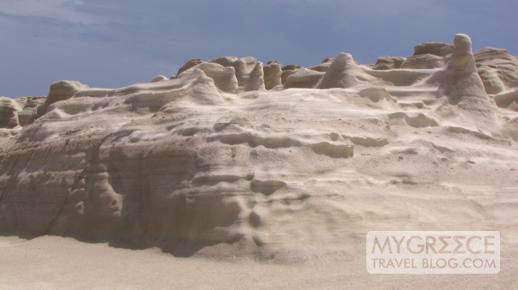 Some people think the rock formations resemble swirls of meringue 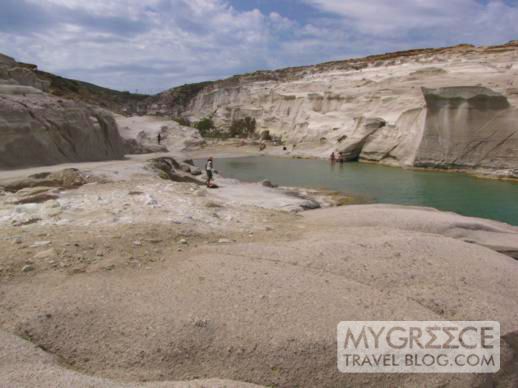 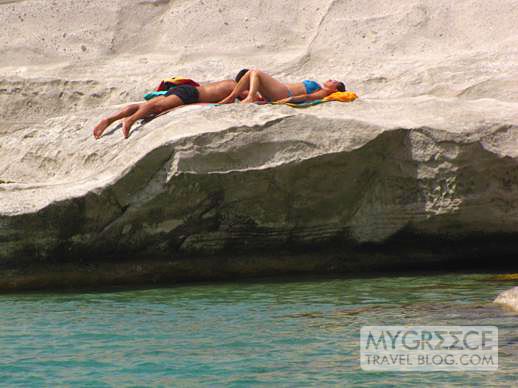 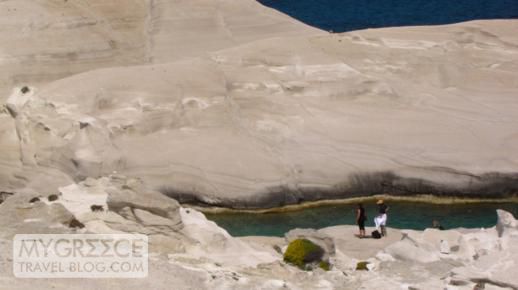 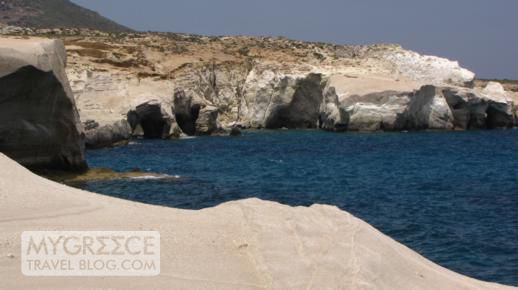 Milos is famous for its spectacular coastal topography, including the dramatic seascape at Sarakiniko 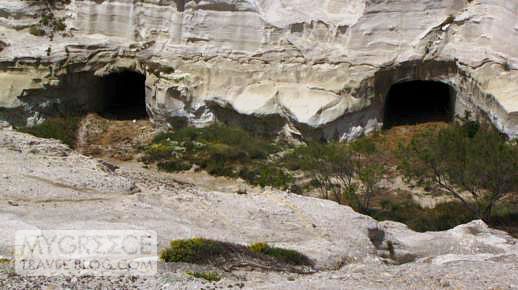 These “caves” in the gorge behind the beach actually are entrances to old mine tunnels; you can explore them if you’re not afraid of the dark! 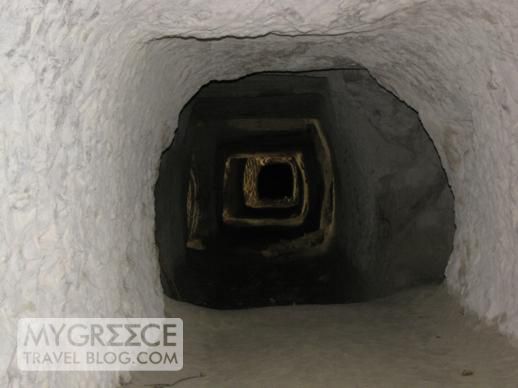 Inside one of the mine tunnels near the beach 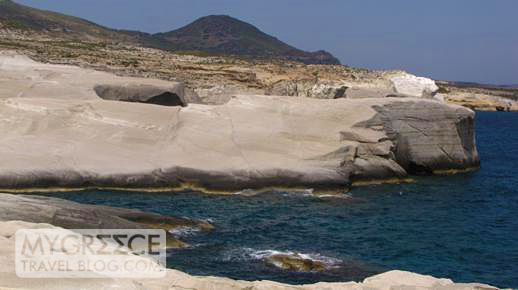 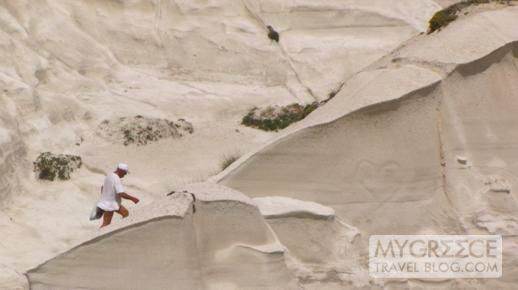 A man climbs one of the rock formations above Sarakiniko beach 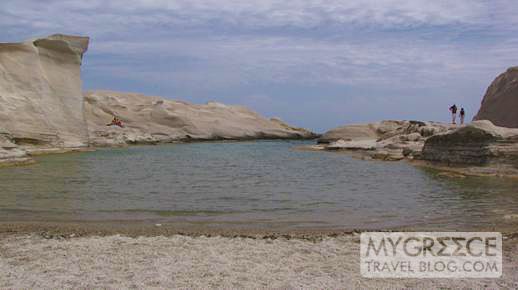 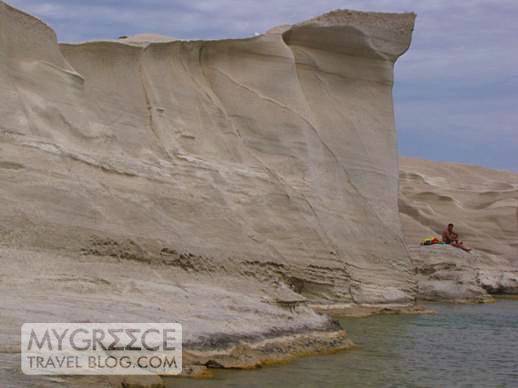 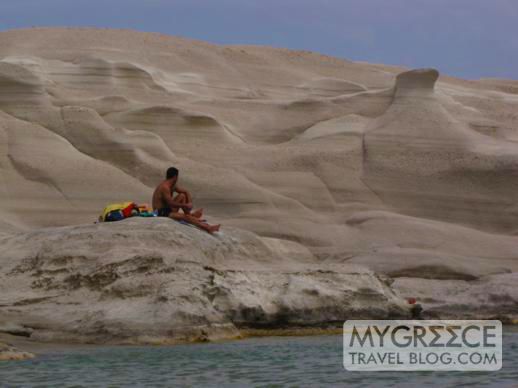 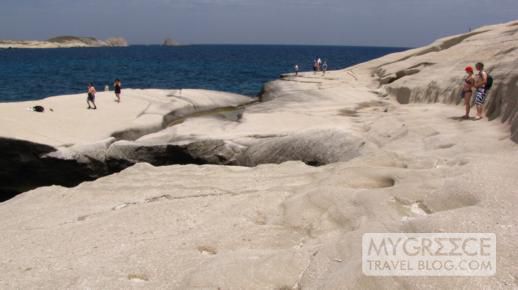 Most visitors are mesmerized by the incredible landscape 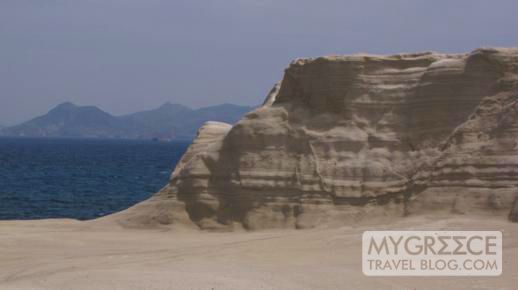 Sarakiniko has views toward nearby Kimolos island 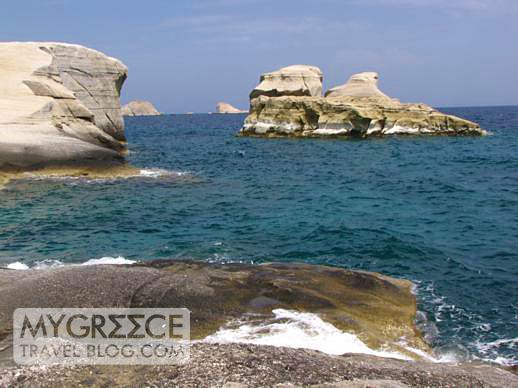 A giant rock in the sea near the Sarakiniko coast 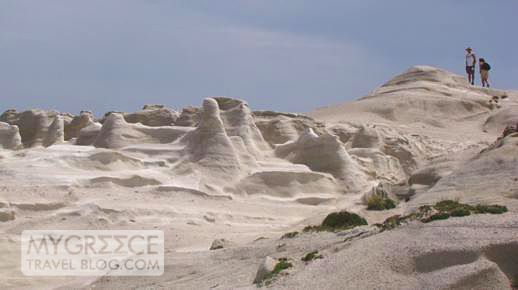 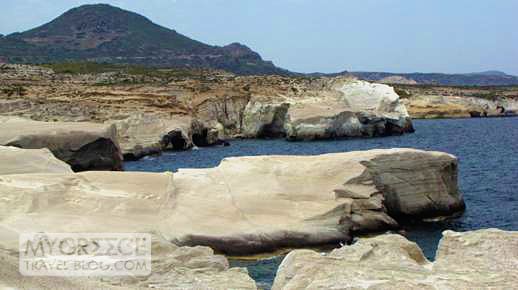 Another view of the stunning coastal scenery at Sarakiniko 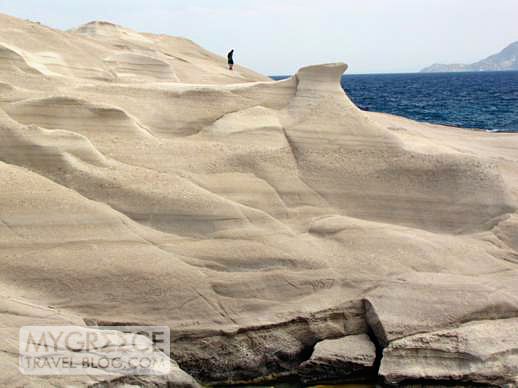 A visitor walks along one of the hillsides above the beach

Hit the beach! Videos of Sarakiniko on Milos