Monumental sunsets at the Portara on Naxos 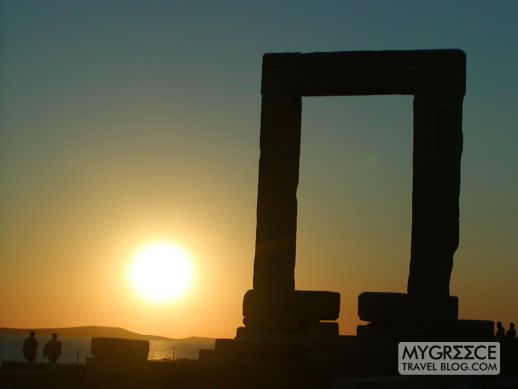 Golden globes: On Naxos, it’s easy to combine history and culture with a bit of sightseeing and sunset viewing all in one free self-guided excursion just a few minutes’ walk from Naxos Town.

All you have to do is take an evening stroll along the short causeway leading to the peninsula on the edge of town (an area known as the Palatia district). Climb the hillside, and you’ll find yourself on one of the island’s best sunset viewing spots, right next to one of the most famous monuments on the island — the giant stone door frame known as the Portara. (If you arrive at Naxos by ferry, you will probably see the Portara as your boat approaches the port.)

Dating from the 6th Century B.C., this remnant of an Archaic temple is described in some guidebooks as the Temple of Apollo, while others call it Ariadne’s Arch (apparently, historians and archaeologists can’t conclusively establish the Greek god in whose honour the structure was originally built).

Though its origins might still be a mystery, what’s beyond question is that the hillside around the Portara is an excellent place to watch sunsets and to enjoy superb views of Naxos Town, its harbour, and its nearby coastline.

Below are some of our photos of the Portara and the peninsula, and of course the sunsets and views from both. 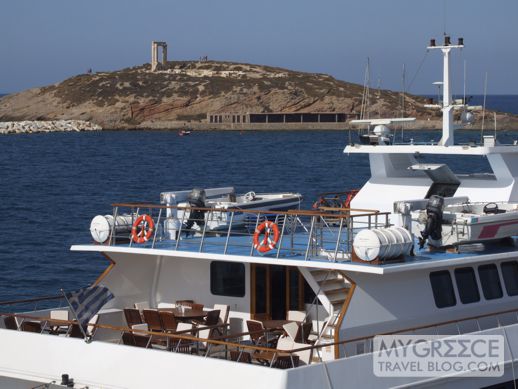 I snapped this photo of the Portara and the Palatia peninsula when our ferry arrived at the port at Naxos Town, on one of our trips to Naxos. 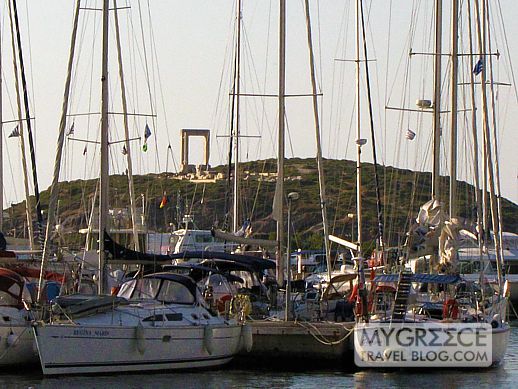 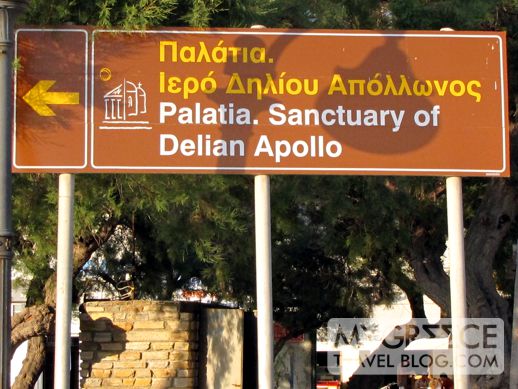 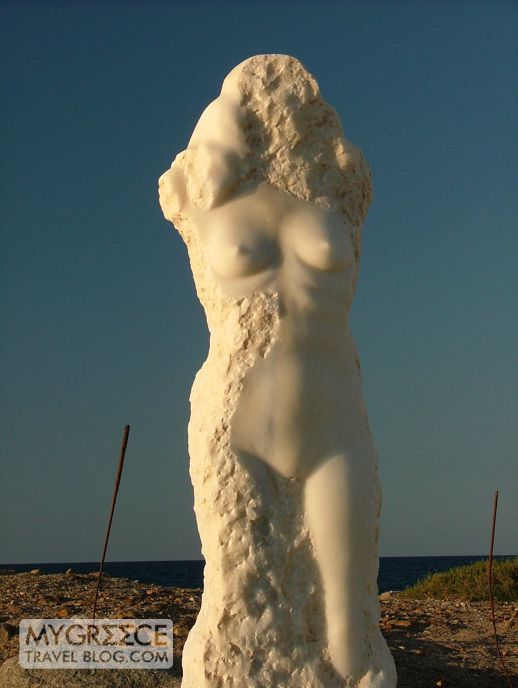 You’ll pass this replica of a sculpture while you walk toward to the causeway; it stands on the right-hand side of the walkway. 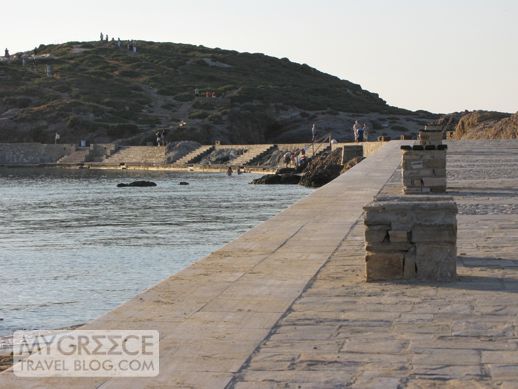 Looking toward the Palatia peninsula from the stone-paved path on the causeway. Locals like to swim in the bay just below steps at the bottom of the hill. 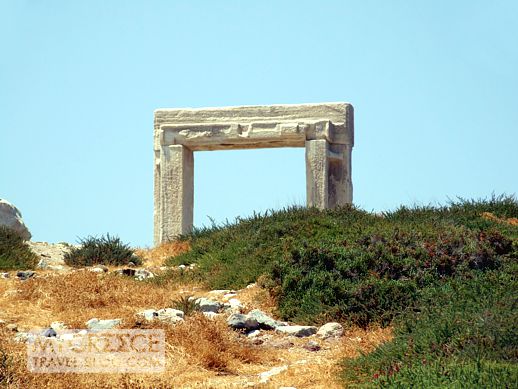 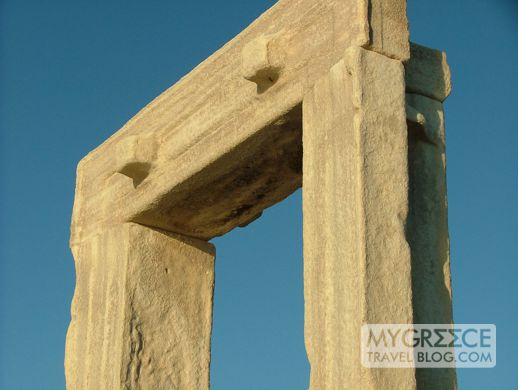 The Portara has numerous names, including the Temple of Apollo, The Doorway to Ariadne’s Palace, and Ariadne’s Arch 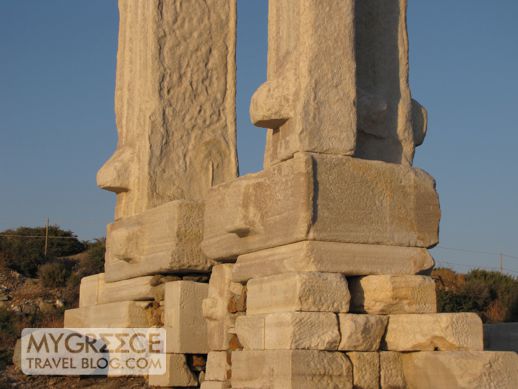 The base of the giant doorway

A view of Naxos Town from the base of the monument 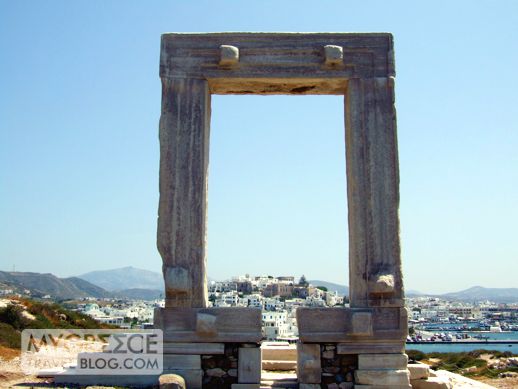 There isn’t much that remains of the temple besides its famous doorway. Most of the ruins, including the arch, are roped off so tourists can’t walk on them. 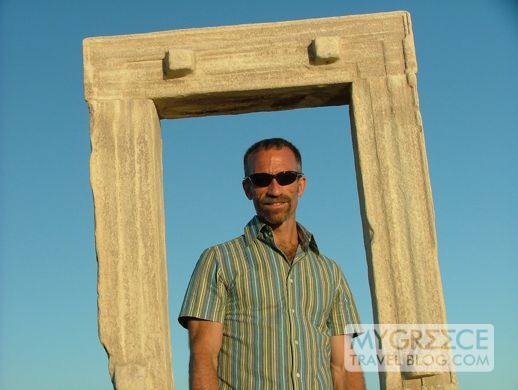 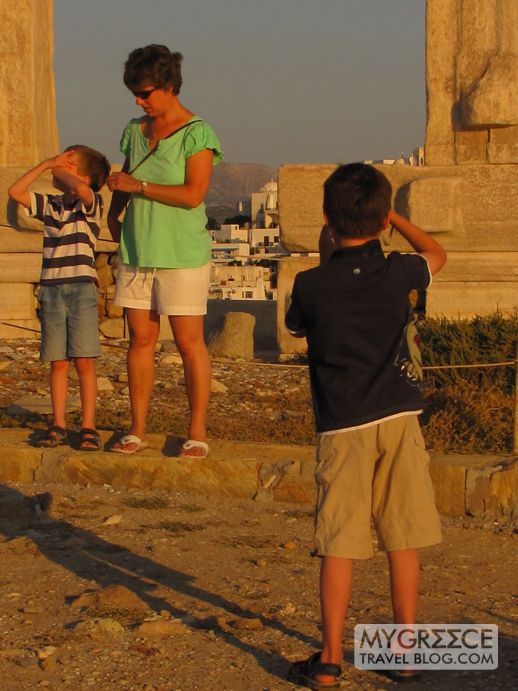 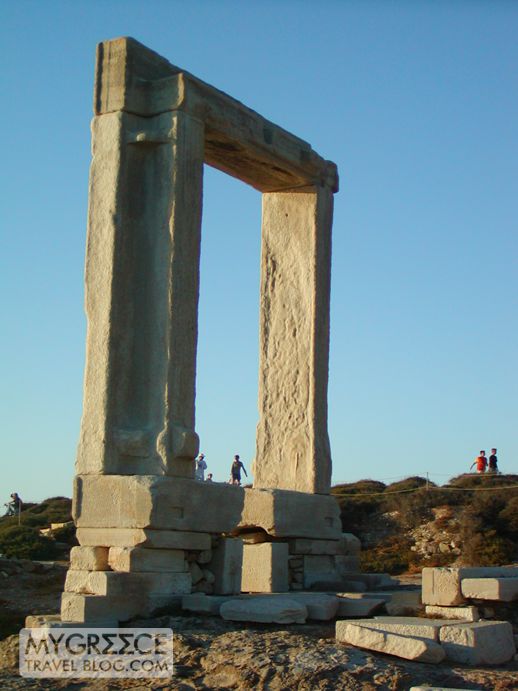 The giant monument dwarfs tourists walking on the hillside behind it 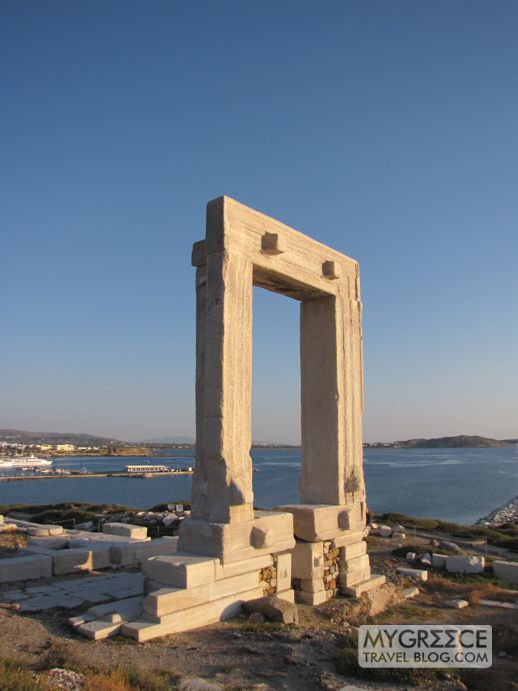 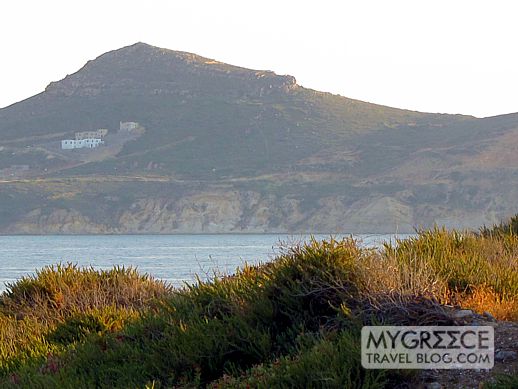 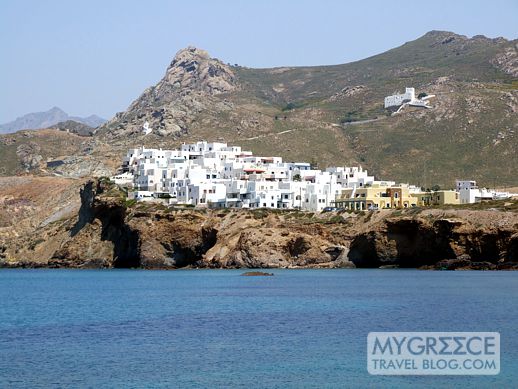 … and, in the other direction, the Grotta district of Naxos Town 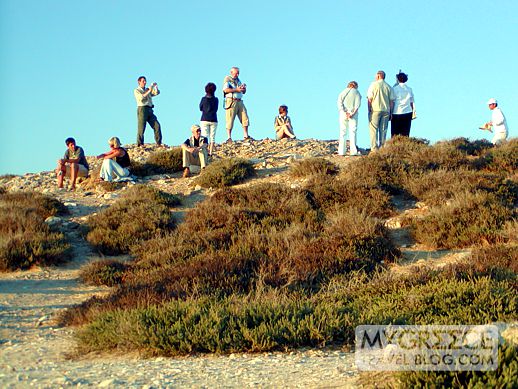 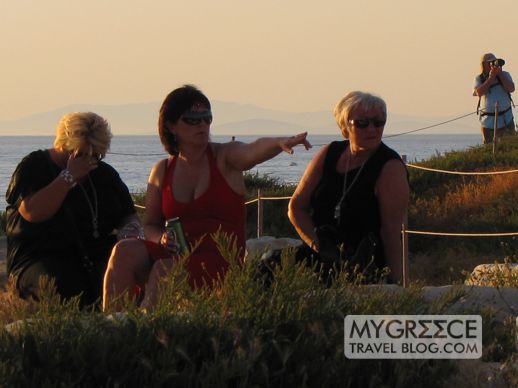 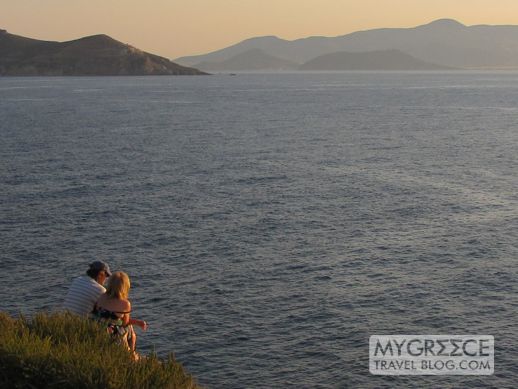 … while others find a comfy spot above the sea offering a good direct view to the west, facing nearby Paros island … 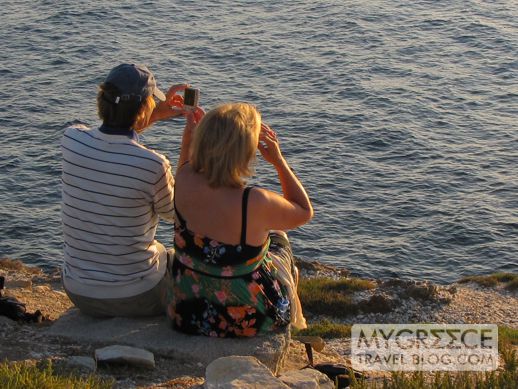 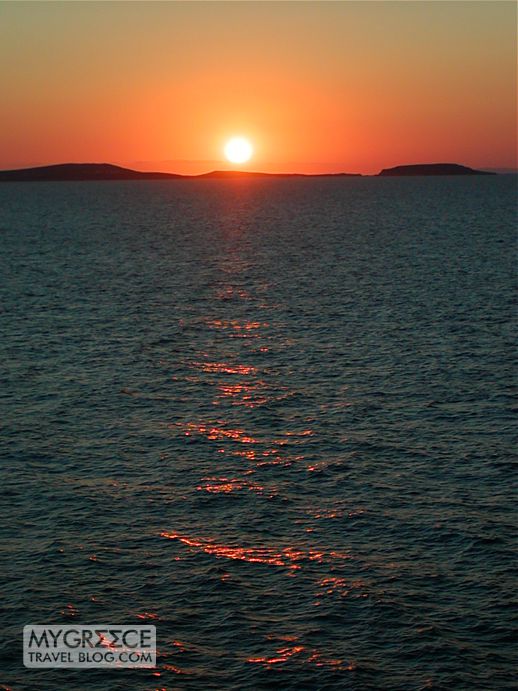 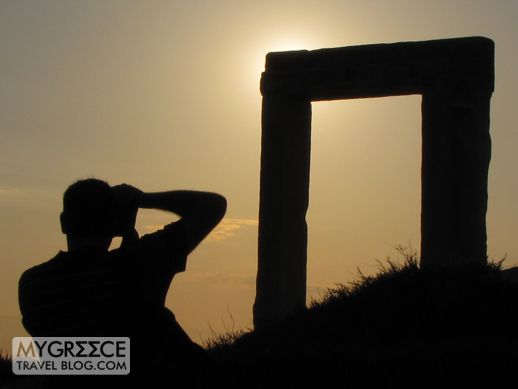 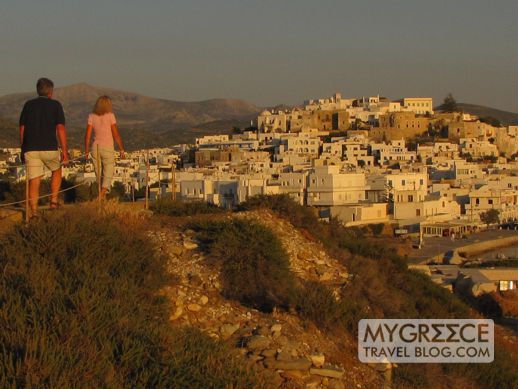 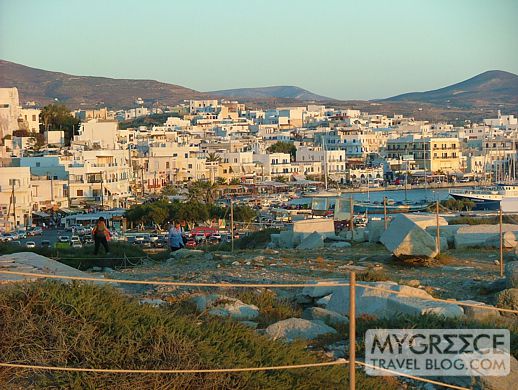 Overlooking the Naxos waterfront and harbour from the Portara 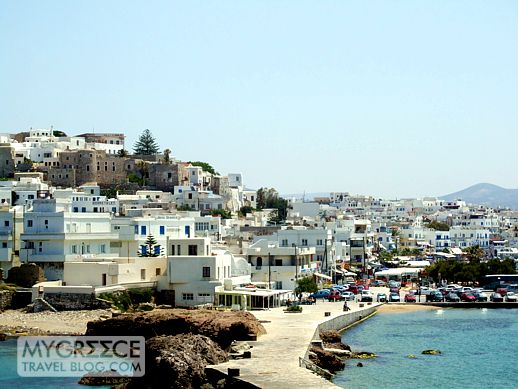 Hillside view of the causeway and Naxos Town 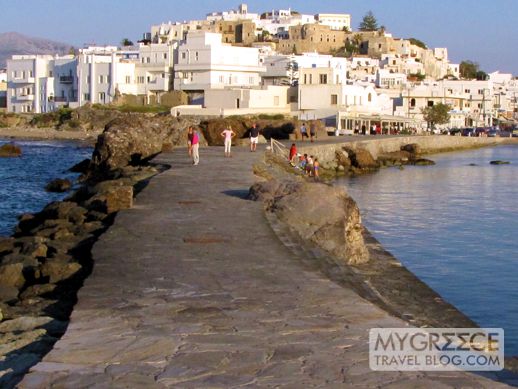 Looking toward Naxos Town from the causeway. Locals like to swim off the right-hand side of the walkway. 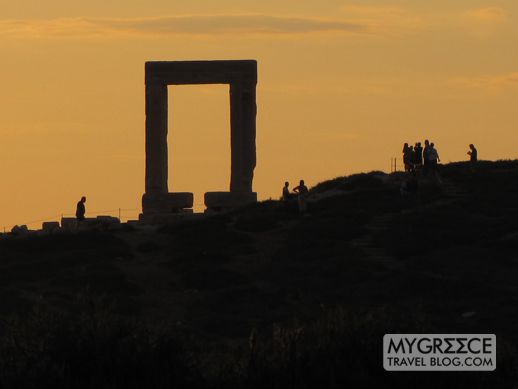 A sunset view of the Portara from the causeway