My favourite videos of Greece from 2019

My Sifnos by Nikos Panou is my favourite video of 2019; it makes me smile and feel good every time I watch it. Panou deftly captures the essence of an amazing Greek holiday experience — the pure joy, wonder and exhilaration of exploring a beautiful destination (in this case, Sifnos island) and discovering the delights of its people, food, culture and atmosphere.

You know that December is drawing to a close when you see just about every media outlet — TV and radio shows, newspapers, magazines and websites — presenting lists and rankings of “the best” and the “top moments/ memories/ things/ whatever” of the year.  Seeing “best of 2019” features everywhere I looked inspired me to compile one myself this week while I was organizing the many hundreds of bookmarks I had accumulated on my web browser this year.

Rather than move links for my favourite videos into folders where I probably would forget all about them, I’m posting them here for my readers to enjoy (and to give me an easier way to find them for repeat viewing or future reference).

Out of the countless clips I have seen in the past 12 months, I have selected just over two dozen to highlight in this post. I liked these best of all either because they show sights and scenes familiar to me from our own past vacations, or because they depict destinations on my travel bucket list. All were released or published sometime during 2019, and none run longer than 10 minutes.

I have organized the clips into alphabetic order starting with the video of Amorgos island, below, and continuing on page 2. Included are films of:

♦ Vatheia in the Peloponnese

I love The Island‘s dramatic cinematography, which superbly captures the mountain, coast and village scenery on Amorgos. This film by Igor Popović also contains excellent views of the incredible Chozoviotissa Monastery, built against the face of a cliff high above the sea.

If there are any videos from 2019 that you enjoyed, but don’t see featured in this post, feel free to post their links in the comments section so other readers and I can check them out.

Immerse yourself in Corfu

Winter video break: As cold temperatures, snowstorms and turbulent weather systems continue to wreak havoc across much of Europe and North America this weekend, I’m sure many of my readers are anxiously counting the days until they can get to Greece for their summer vacation.

If  you’re feeling blue from bad weather and the seemingly never-ending winter in your part of the world, here’s an effective antidote that will give you a lift — a travel video with dreamy late summer scenes from Corfu island.

Khurum Khan recently brought the film to my attention through my blog’s Facebook page, where I’ve already shared his Greece — Corfu Travel Video. I watched it a couple more times again today to take my mind off our windy, cold conditions, and thought I should share it here on the blog for those who don’t follow me on Facebook so they, too, can enjoy a brief video respite from winter.

Khurum visited Corfu last September, his first-ever trip to Greece, and said he “had an amazing time.” His cinematic travel video certainly leaves no doubt about that.

With a running length of nearly three and a half minutes, the film abounds in beautiful beach, sea, coast and mountain scenery, and lots of alluring images from in and on the inviting Ionian Sea. I find the film totally mesmerizing — it makes me feel like I’m right there on Corfu, contemplating the wonderful scenery and swimming in the brilliant turquoise waters.

Give it a watch and enjoy a temporary escape from winter. 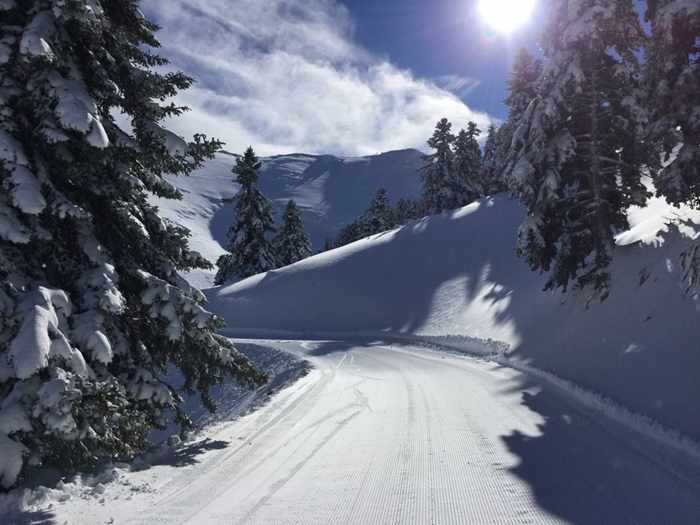 There is snow as far as the eye can see along the road to Kalavrita Ski Center in the northern Peloponnese. The picture was posted to the ski resort’s Facebook page on January 6

Winter wonders: This is the second set of photos I’m publishing on the blog to profile remarkable winter scenery in different regions of Greece — images that have been shared on social media after much of the nation was struck by icy cold temperatures and some surprisingly heavy snowfalls during the 2016 Christmas holidays and up to the second week of January 2017.

Here in Part 2 I have collected photos from Crete, Nafplio, Epidaurus, Thessaloniki, some of the Cyclades and Ionian islands, plus various locations in the Peloponnese and mainland Greece. Many of the photo captions include links to social media pages or websites where you can find countless more pictures of snowy sites in Greece. (It could be spring by the time you manage to finish looking at the photos on all of the links!)

Click on the link beneath the next photo to view the full series of pictures on page 2 of this post. 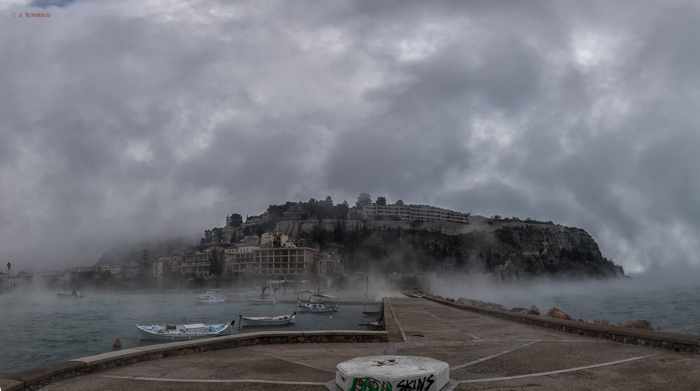 One of my favourite Greece winter scenes is this spectacular photograph by Thanos Komninos, which captures dark, fluffy storm clouds swirling above and around the Nafplio Old Town and Acronauplia fortress, before leaving the town dusted with a layer of light snow. The photo appeared on the Nafplio Kalimera page on Facebook.

Take a 3-minute aerial cruise above Corfu in this newly-released video, produced on behalf of the island’s port authority

Video vacation: I feel like I have just taken an extensive and exhausting (but in a good way) sightseeing trip to Corfu — even though I haven’t been there yet. And courtesy of several online videos I’ve been watching the past couple of days, it’s entirely possible that I may have just seen more of the island from here at home than I might have been able to see had I actually been on Corfu for the same period of time.

On March 14, a link to Corfu, the Garden of Gods (above) popped up in my social media news feeds, and I watched the film a few times.  The three-minute aerial video was shared by Vangelis Koulouris,  who said the short clip “was created for the Port Authority of Corfu with a view to highlight the unique environment and the multicultural history of Corfu island.”

The film features soaring views of Corfu’s lush landscapes, its picturesque coastlines and beaches, the island’s beautiful capital (also called Corfu), and cruise ships calling at its port. Corfu is, of course, one of the top Greek island destinations for cruise ships, so a video by its port authority just wouldn’t seem complete without at least a few passenger liners appearing in the picture.

As tends to happen whenever I find something interesting on social media, one thing led to another — and before long I had compiled a playlist of several more Corfu videos to view.  But except for Garden of the Gods, and another 3-minute clip, the other films weren’t as short and sweet — with run times ranging from 10 and 24 minutes to nearly two hours, they were the equivalent of watching a few evenings of TV programs. But I considered it “time well wasted,” as the saying goes.

It’s time some of you might wish to spend, too, should you be considering Corfu for an upcoming or future vacation — or should you simply want to see what the island is all about. To that end, I have posted some of the videos below. Four of the six films (including the one above) were  published just within the last several weeks, while two were released last year. What I appreciated most about the videos is that they either show or tell you the names of places you’re looking at — something all too many travel videos fail to do.

If you manage to make it through all the clips, you’ll probably feel like you’ve just gone to the island, too — or attended a Corfu film festival!

My Corfu in 3 minutes is a quick-view highlight version of the considerably longer My Corfu, which is posted directly below.  Produced by Petros Kapsokavadis and the Oasis Hotel in Perama, it’s intended for viewers who don’t have enough time to watch the full-length clip.

This is the full 24-minute My Corfu video by Petros Kapsokavadis and the Oasis hotel. Most of the clip is aerial videography of places all around the island, but there is a segment showing part of the Corfu Mountain Trail footpath from Perama to Gastouri.

Corfu — the island of eternal returns is a 10-minute film released just this month by the Mouzenidis Group of companies. A guide takes viewers on a tour of many of Corfu’s marvellous attractions, sights and scenery while describing highlights of the island’s history.

Corfu Coast Line is an aerial tour around the Corfu coast. The 48-minute film is a project of Corfu Benitses, the Association for Culture and Redevelopment of Benitses, a fishing village 12 km from Corfu city.

The Corfu Vacation Travel Video Guide title says it all! Nearly 58 minutes long, the informative narrated film is a production of Exposa Travel.

My Movie Corfu Trail clocks in at 1 hour and 50 minutes but it is, after all, a video diary of a 10-day, 150-mile trek around the island that Tim Beal and a friend took last September.  “It is a fantastic walk and should be a tonic for all who like fine views, fine food and great people. Take two weeks out and walk Corfu… you will love it!” Tim says. If you don’t have the energy to attempt the walk yourself, simply sit back and watch Tim and his friend do it instead!