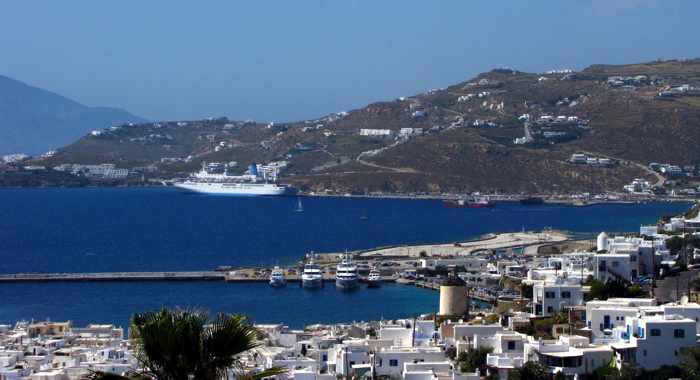 This photo from one of our Mykonos holidays shows four charter yachts docked at the island’s Old Port at Mykonos Town (foreground), and a cruise ship berthed at the New Port in Tourlos, nearly 2 kilometers away by road.

Ferry straightforward: Where does my ferry arrive at  / depart from on Mykonos?

That question has vexed visitors for years, since the island has two ports — the original one at the Mykonos Town harbour (commonly called the Old Port) and a newer, substantially larger facility in the island’s Tourlos district (regularly referred to as the New Port, of course).

The standard answer used to sound simple enough: ferries that carry passengers and vehicles sail to and from the New Port, while smaller ferries that just carry passengers operate from the Old Port.  But since most travellers didn’t have a clue if the ship they were booked on carried vehicles or not, that advice wasn’t always helpful. Not surprisingly, many people missed their ferries because they arrived at the wrong port and didn’t have enough time to get to the right departure point.

Thankfully, the reign of ferry port confusion could soon be history:  As of Saturday April 6 2019, all ferry traffic to and from the island will use the New Port only. 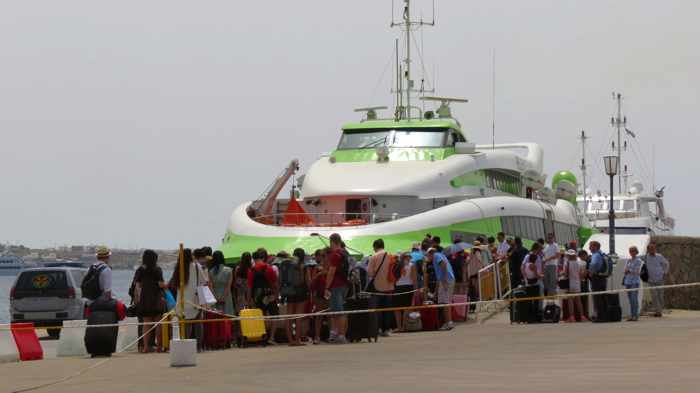 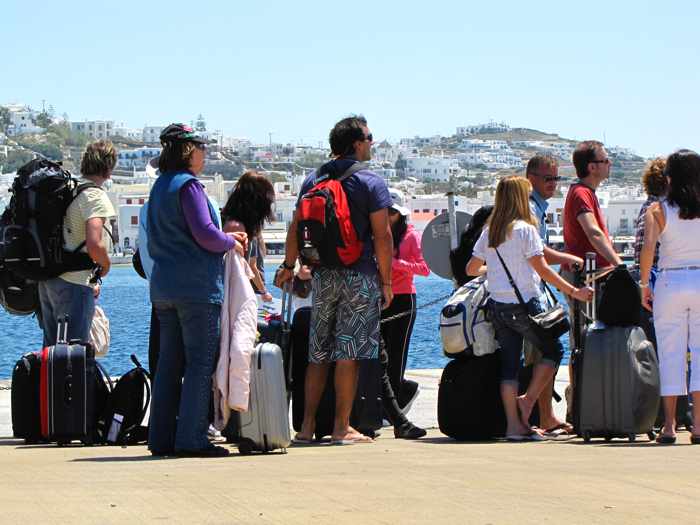 I shot these photos of travellers queuing to board passenger-only catamaran ferries at the Old Port in Mykonos Town several years ago. As of April 6 2019, the Old Port will no longer handle ferry traffic. 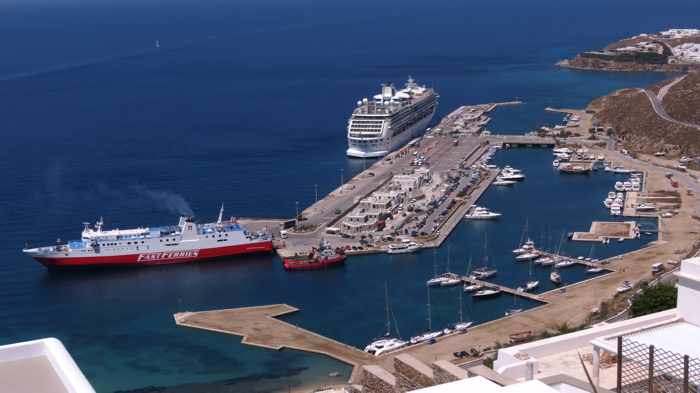 One of my Mykonos holiday photos of the New Port at Tourlos.  All ferry ships will now arrive at and depart from this harbour.

I learned about this development from Mykonos news websites, but the reports were all in Greek and Google Translate offered an awkward translation. To make certain I wasn’t misinterpreting what I had read, I contacted the top ferry booking agency on Mykonos, Sea & Sky Travel, to confirm if the news was accurate.

“Yes, it’s true. All the boats, including the small passengers ones , will be leaving from the new port from now on,” a Sea & Sky representative told me.

The news reports said the change was implemented by the Mykonos port authority, upon request by the Greek government ministry responsible for shipping and marine regulation, to eliminate confusion and help prevent passengers from missing their ferries.

It’s a welcome change, but I think some confusion may persist for awhile. For one thing, many repeat visitors have travelled to and from Mykonos on passenger-only catamarans that operated in and out of the Old Port. If they don’t hear the news, their travel plans could get screwed up if they head to the Old Port, out of habit, when leaving the island. For another, many first-time visitors won’t be aware of the change, or may have read outdated posts on the TripAdvisor travel forums, or other online travel sites, that describe the old distinction between the two Mykonos ports. Hopefully word will get out and fewer people will miss ferries this year. 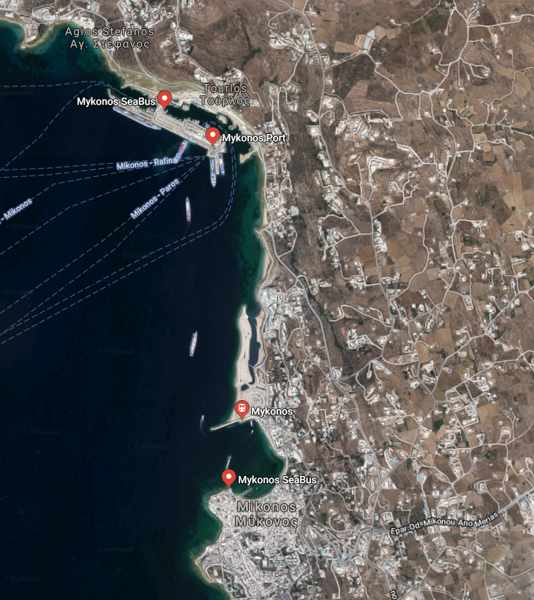 This Google image shows the Mykonos New Port (top) and the Old Port at Mykonos Town (bottom), a 2 kilometer walk or drive apart. Also shown are the main pick-up and drop-off points for the Mykonos SeaBus, an inexpensive water taxi service that operates between the two ports.

Which leaves the next most popular question about ferry travel to Mykonos: How do I get from the port to my accommodations?

For a list of transport options, please click on the link below to continue reading on page 2 of this post, and to view photos of things visitors will see if they travel along the coastal road between Tourlos and Mykonos Town.

More moments in the Mani peninsula of the Peloponnese