The Mermaid Madonna church at Skala Sykaminias on Lesvos 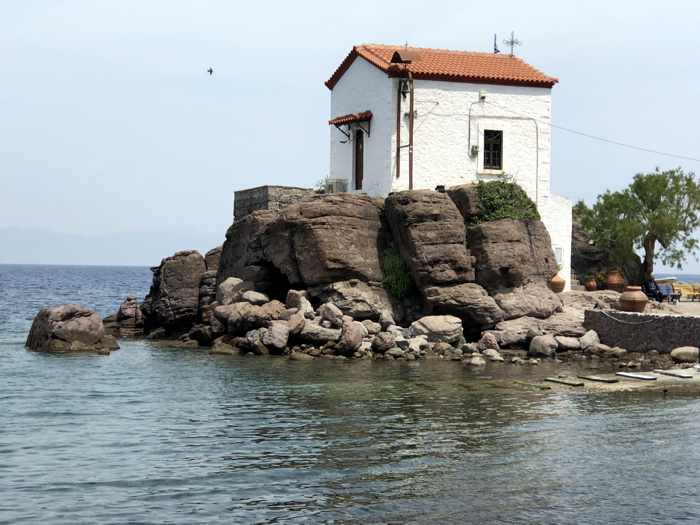 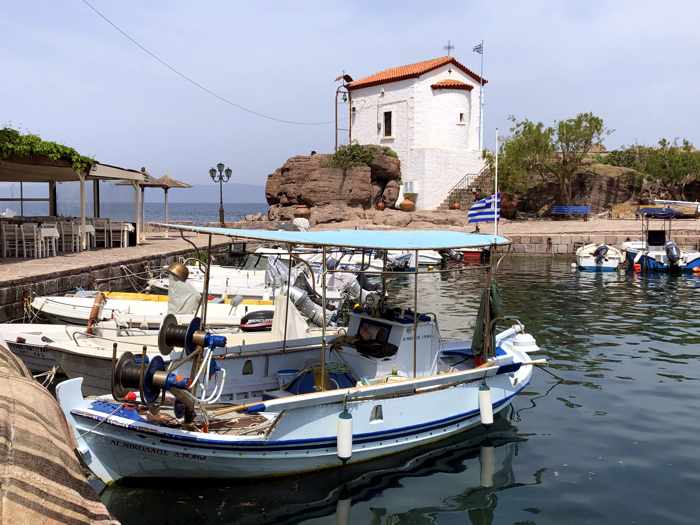 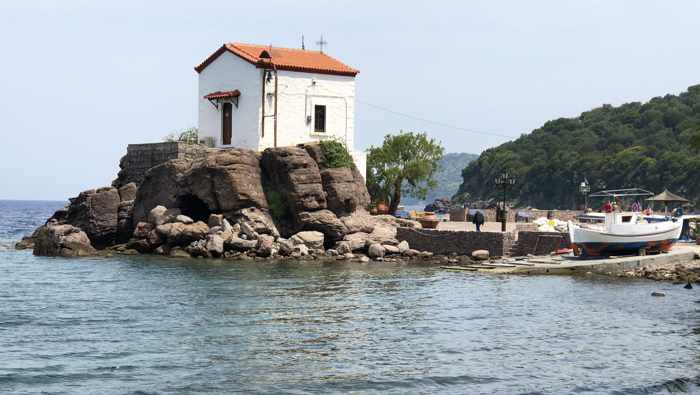 Three views of the church of Panagia Gorgona (the Mermaid Madonna), in photos from our visit to Skala Sykaminias on Lesvos

Greek island icon: Sometimes we learn fascinating facts and interesting background details about places we’ve been to in Greece long after we get home from holidays, rather than while we’re there in person, and this certainly proved to be the case for Skala Sykaminias village on Lesvos.

Mid-spring of 2019 found us staying in the beautiful town of Molyvos at the beginning of our first-ever Lesvos vacation — which coincidentally wound up being our last trip to Greece before the Covid-19 pandemic interrupted our annual travels.

During breakfast one morning, we were mulling where to go on a sightseeing drive that day. Our maps and guide books described nearby Skala Sykaminias as one of the most picturesque fishing villages on Lesvos, and other travellers at our hotel in Molyvos agreed, effusively praising it as “lovely,”  “charming,” and “not to be missed.” Since it was an easy, short drive from our accommodations, we decided to make the village our first stop.

We thought it was just as pretty as people had promised, in large part thanks to a quaint whitewashed chapel that gives the harbour much of its unique character and photogenic appeal. Built atop a large rock formation on one side of the port, the small, simple church is the standout feature of the Skala Sykaminias seafront.

Like the handful of other tourists wandering around the village that late April afternoon, we made a point of popping by for a closer look at the little church. The door was locked tight, so we couldn’t look around inside, but we did enjoy pausing to take in the impressive views of the sea, harbour and village from the elevated position of the building and its adjacent terrace. 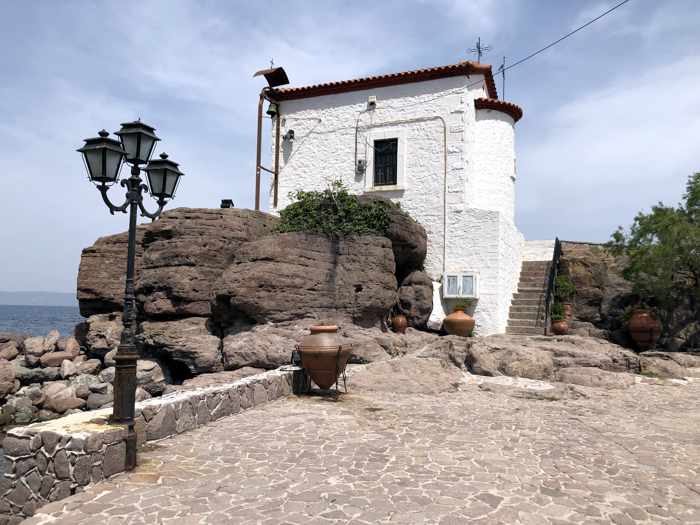 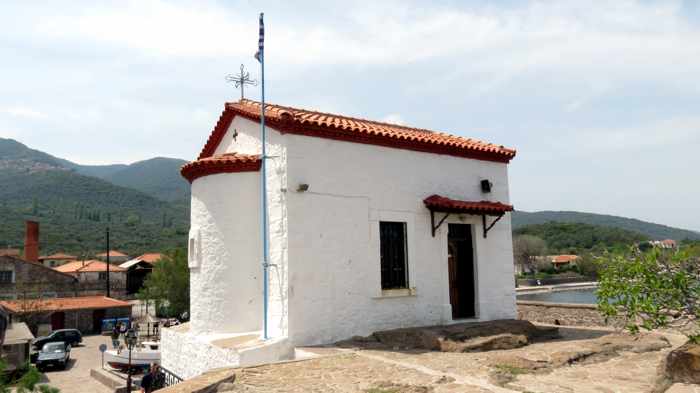 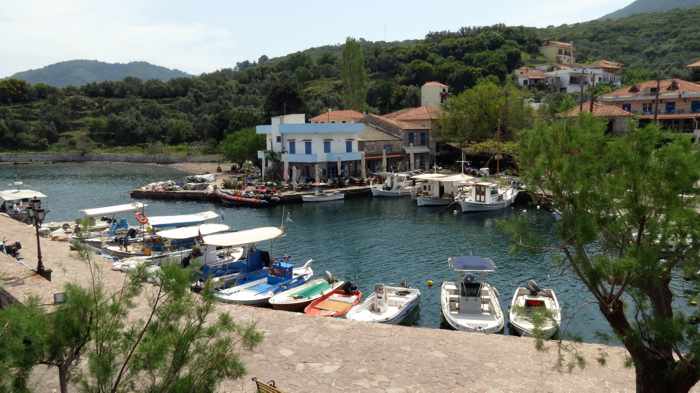 Some of our travel guides said the church is dedicated to the Virgin Mary and called Panagia Gorgona (the Mermaid Madonna), but they didn’t explain how or why it got that name. In fact, they didn’t provide any information about the village’s signature attraction at all, and very little about Skala Sykaminia, either, apart from saying it’s famous for its fish tavernas. During our various travels in Greece, we have seen shops, hotels and tavernas named Gorgona, so it didn’t strike us as odd that a seaside chapel might be called that, too.

It wasn’t until months after we returned home from our holiday that I came across some curious stories and interesting information about Panagia Gorgona and the Skala Sykaminias settlement, and learned that both owe much of their tourist fame to a novel published in 1949 by a locally-born writer, Stratis Myrivilis.

I had never heard of Myrivilis until I noticed his name in the excellent photography book, Aeolian Lesvos (Liza Evert, Constellation Books Athens, 1995), which I had purchased on the island as a personal souvenir from our trip. Captions for two of the book’s beautiful photos of Skala Sykaminias were excerpts from Myrivilis’s novel, The Mermaid Madonna, which is regarded as the writer’s best-known work.

The quote in one of the photo captions described how a group of masons had been travelling by boat to a village in northern Lesvos, where they were scheduled to construct a soap factory. En route, they encountered a sudden storm squall that nearly capsized their vessel. When the masons noticed a rocky crag on the nearby coast, they said a prayer: “Save us and we’ll build you a chapel.” The weather settled immediately, and the masons and boat crew safely reached the shore at Skala Sykaminias. “They tied up the vessel and carried out their vow. That’s why the little chapel looks so like a small oil shop.”

Intrigued, I searched online for more information about Myrivilis, and found an informative PowerPoint presentation that students at the junior high school in Petra, Lesvos, had prepared for an Erasmus+ project entitled Every child matters: refugees and immigrants in education (Ermasmus+ is an EU governmental program for education, training, youth and sport). 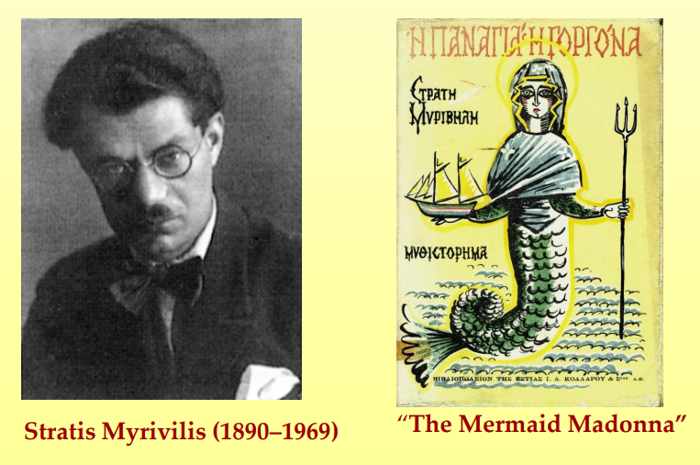 Photos of Greek writer Stratis Myrivilis and the cover of his popular 1949 novel, The Mermaid Madonna, are seen in an image from a presentation the Junior High School in Petra, Lesvos prepared for an EU educational program

The slideshow provides a brief biography of Myrivilis, a 3-time nominee for the Nobel literature prize, and includes a synopsis of The Mermaid Madonna, the novel he named after the little chapel in Skala Sykaminias. The book tells gripping stories based upon the harrowing refugee crisis that took place in 1922, when Turks torched the coastal city of Smyrna and forced more than a million native Greeks to flee the Anatolia region (Smyrna was part of what is now the Turkish city of Izmir). Besides describing the arrival of refugees at Skala Sykaminias, Myrivilis tells the tale of the masons who built Panagia Gorgona, and recounts some local legends about mermaids and village residents.

One story relates how village inhabitants reacted to a little green-eyed girl who was discovered in a fishing boat, and believed to be the daughter of a mermaid who had seduced a fisherman. Elsewhere, the book describes how villagers began to worship a mural that a sea captain purportedly painted inside the church, depicting the Virgin Mary with a mermaid’s tale. (The painting disappeared from the church decades ago, if it even existed in the first place.) 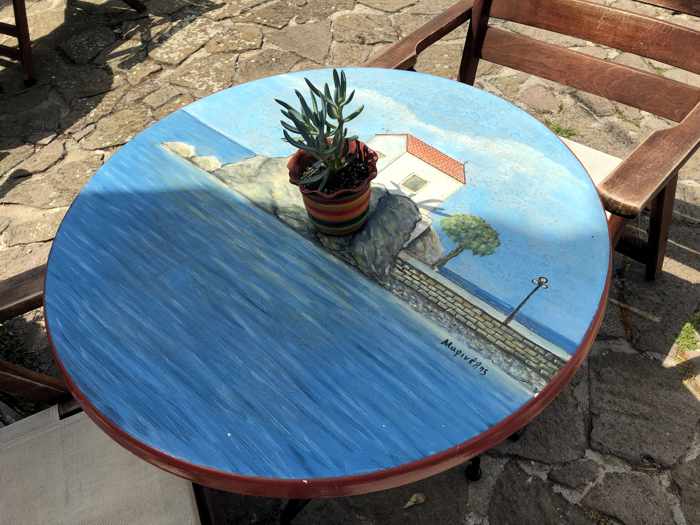 I felt dismayed that we hadn’t known about Myrivilis and his captivating stories, or the Smyrna refugee connection to Skala Sykaminias, before going to Lesvos. I’m convinced all the background information I discovered afterwards would have enhanced our visit, giving us a much better appreciation for the history of the church and village. We probably would have scoured the seaside for signs of mermaids, and peered through the chapel window to try and spot where the famous mural may have been painted!

Though we didn’t realize it at the time, we obviously had fallen under the siren’s spell simply by going there.

As an insightful article in the Lesvos-based blog Smitaki Boulevard News observes, “Skala Sykaminia is the village of the mermaid, who in modern times, continues her ancient craft, by seducing tourists.” Indeed — her charms had certainly worked their magic on us. I can still feel them sometimes, gently trying to lure us back.

If a trip to Lesvos is in your future plans, be sure to heed the siren’s call and pay Skala Sykaminias a visit.

For more information and photos of the church and village, here are links to several online articles and social media posts:

♦   A detailed description of the Stratis Myrivilis story about the church is outlined in The Mermaid of Sykaminia post on the blog Smitaki Boulevard News Lesvos, which we mentiioned above;

♦ Photos of the chapel, including three pictures of its interior, can be seen on the Ι .Ν. Panagia tis Gorgonas – North Aegean Islands page of the Holy Archdiocese of Athens website of Religious Tourism Destinations;

♦ The Mermaid Madonna post on the NixPixMix blog includes several photos of the church (inside and out) and the Skala Sykaminias harbour, as well as a modern painting that depicts how the legendary mermaid Madonna fresco may have looked;

♦ A few Instagram photos and brief descriptions of the stories about the church are included in the Travelgirl blog post The church of Panagia Gorgona on Lesvos became famous from the novel by Myrivilis.

Below are several more of our photos of the church and harbour: 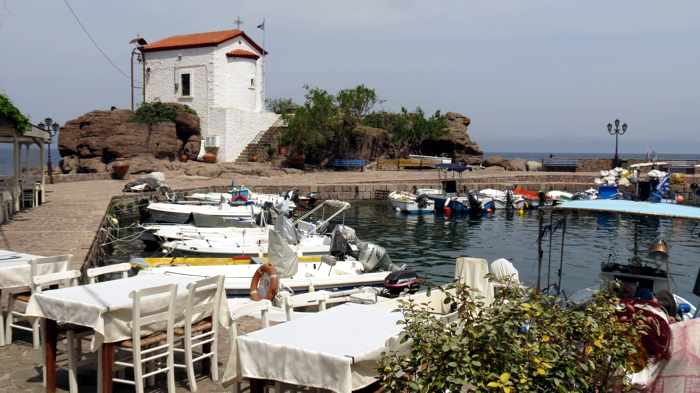 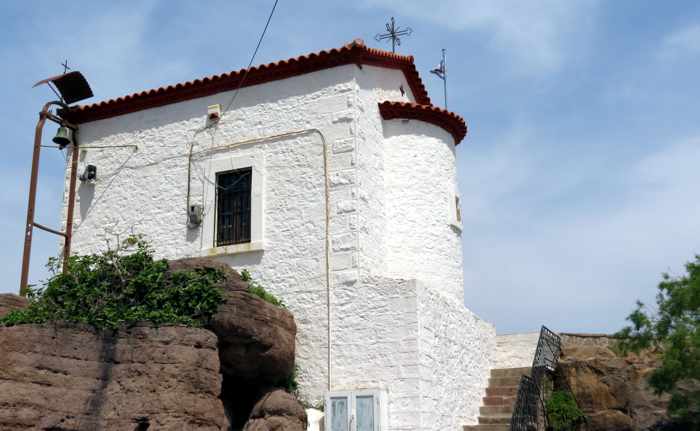 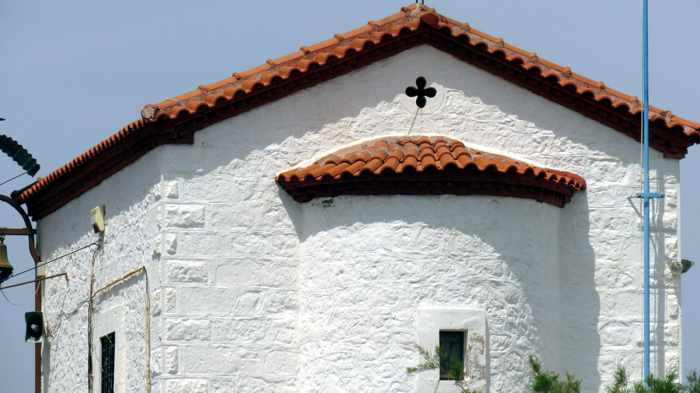 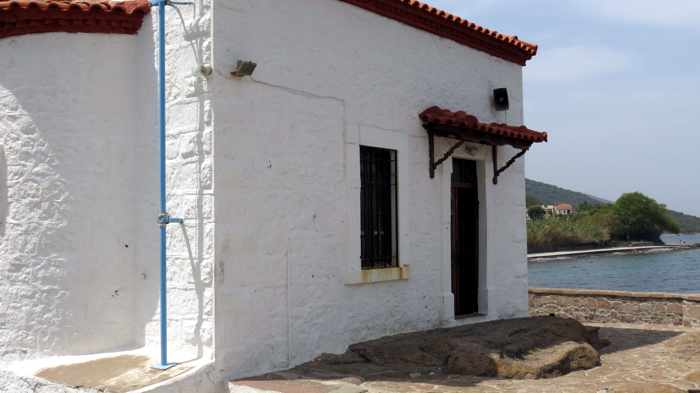 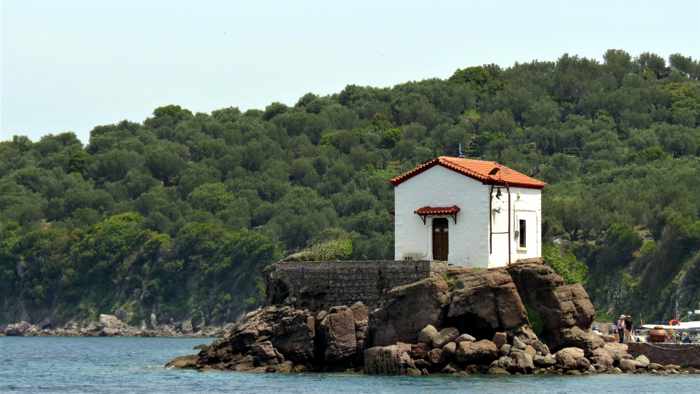 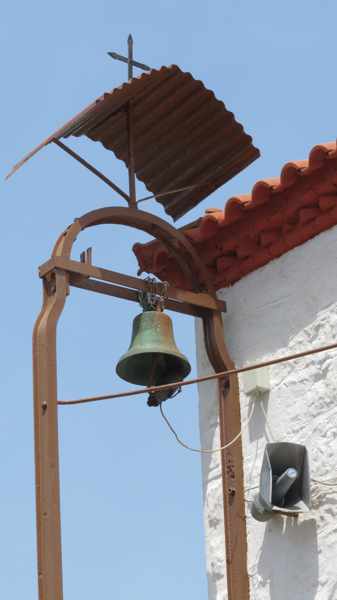 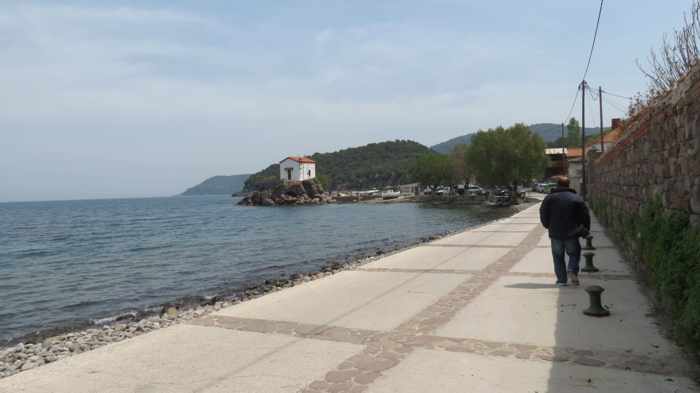 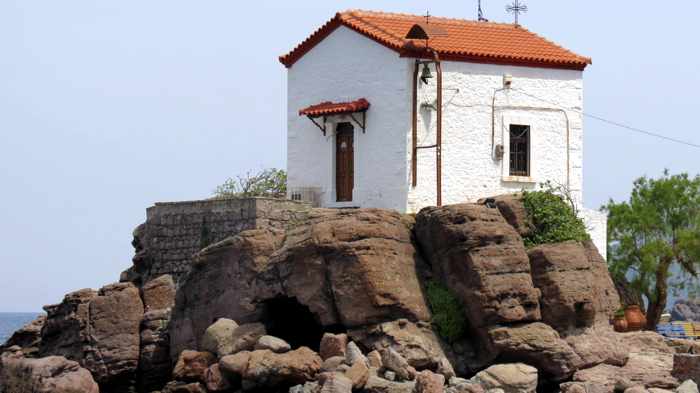 Views from above: the Mermaid Madonna church and Skala Sykaminias on Lesvos