Quirks & Curiosities: On Samos, you don’t even have to pull off the street to gas up your car! 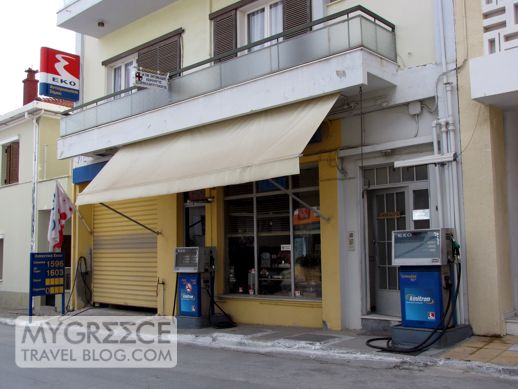 This Eko gas station occupies the ground level of a building on a commercial and residential street in the town of Vathi, on Samos. The fuel pumps sit on the edge of the road, smack up against the front of the building.

Sidewalk station: While we were walking around the main town of Vathi shortly after arriving on Samos in May 2010, we were surprised to see a pair of fuel pumps standing beside a building midway up a residential and commercial street, just a short stroll from the waterfront. Only a few feet away sat a sign advertising prices for unleaded (€1.596) and “super” (€1.603), while a “no smoking” decal was pasted to the windows between the two pumps. At first we thought the pumps might be just an attention-getting part of a modern art installation outside a contemporary gallery, but then we noticed the Eko sign sticking out from a corner on the building’s second floor. It really was a gas station.

I can’t recall ever seeing a service station with fuel pumps positioned literally on the edge of a road, let alone mere inches from the side of a building. And I had never seen one operating from the ground level of a building in the middle of a street full of shops and apartments, either. I’m fairly certain that, in North America, putting gas pumps so close to a building or a roadway would probably contravene fire codes, safety laws and myriad other regulations.

The station was closed, so we didn’t get to watch anybody stop for a fill-up. But imagine the convenience of not having to pull your car off the road and into a service station to get gas! 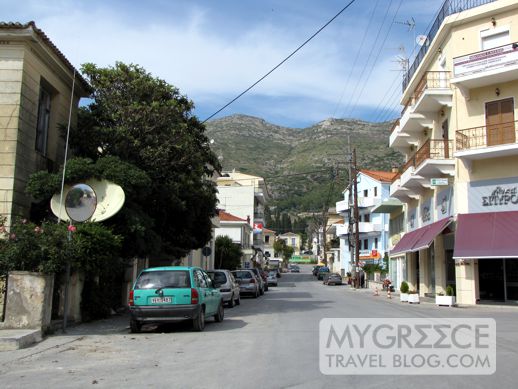 The red, white and blue sign for the Eko gas station is visible above the cars parked halfway up the block on the left side of the street 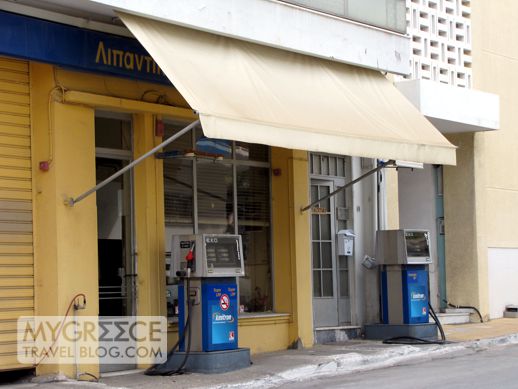 Another view of the Eko station, from a different angle