This video news report by Ekathimerini English Edition, a daily newspaper published in Athens, examines this year’s surge in tourism to Greece.

June jump: Greece remains on target for a record year of tourism, with June arrivals to Athens International Airport up by nearly 15% over last year.

The Greece Ministry of Tourism expects a record 17 million tourists to visit the country this year, bringing the recession-ravaged country €11 billion in much-needed revenue.

But even though tourist-related businesses have noticed more visitor traffic this season, particularly in Athens, they haven’t seen a corresponding increase in the amount of money that tourists have been spending.

Click on the image above to view a brief Ekathimerini video news report on this year’s prospects for Greece tourism. 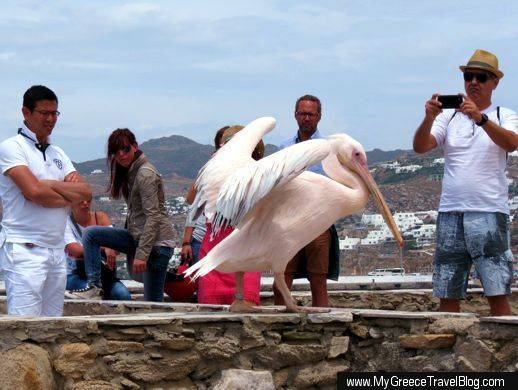 A pelican entertains tourists in the Kastro area of Mykonos Town

Bookings up: The 2013 travel season appears to have gotten off to a good start for Mykonos, one of the top tourist destinations in the Greek Islands.

While I was on Mykonos from May 13 to 18 during my annual Greek holiday, I spoke to dozens of hotel managers, restaurant staff, shop proprietors and other people involved in businesses that depend upon tourism. Virtually everyone told me there was more tourist traffic on the island this month compared to the same time last year, and all signs (so far, at least) suggest the rest of the travel season will be much busier than it was in 2012.

Regular readers will recall that, in my series of reports about my 8-day visit to Mykonos in May 2012, I frequently mentioned how unusually quiet the island had been, even on days when cruise ships called into port. Mykonos Town was practically empty of tourists most times I walked around, and lacked the typically vibrant energy, hustle and bustle that I had encountered on seven previous trips to the island.