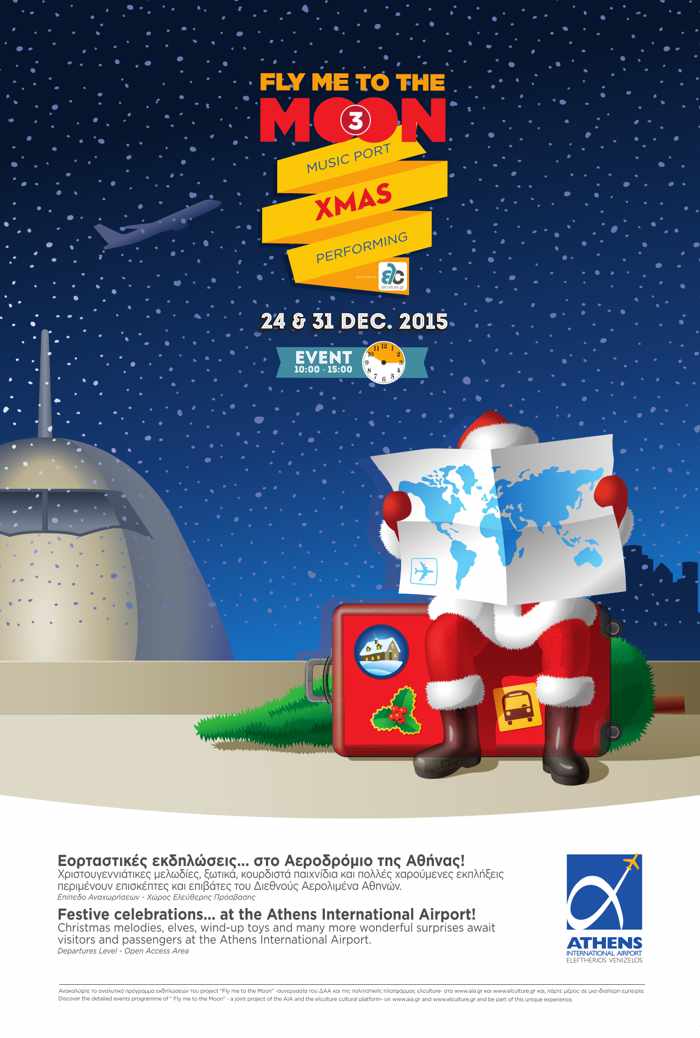 Travel treats: Athens International Airport will be sharing the holiday spirit with special festive music and fun for kids on Christmas Eve and New Year’s Eve.

Between 10 a.m. and 3 p.m. on both of those days, the airport will be treating travellers to live music and entertainment, as well as fun events specially geared to children, in the open access area of the terminal’s departures level.

The entertainment lineup for both December 24 and December 31  includes:

♦ appearances by two Happy Mascots — the Christmas Elf and the “living toy,” Miss Carousel — who will entertain children with acrobatic tricks, wish cards and photo opportunities

♦ the wind-up Living Statue, who will delight travellers near Entrances 1, 2, 3 and 4 in the open access area of the departures floor; and

♦ the Transformation Booth, where visitors can choose fun accessories and props for photo-taking. The booth will be at  Entrance 2 for the check-in counters.

On Christmas Eve, the Experimental Music School of Pallini will present a musical program of carols and all-time-favourite Christmas classics. The ensemble includes students who specialize in Greek and international traditional music and who play traditional instruments. The performance will take place from 12:00 to 12:45 in the open access section of the airport shopping center on the departure floor.

On New Year’s Eve, the Athens-based band Vanila Swing will help travellers bid farewell to 2015 with a live swing concert featuring the group’s trademark blend of 50s rockabilly and 40s swing with a fresh rock’n’ roll twist. The concert will take place from 12:00 to 13:00 in the open access section of the airport shopping center on the departure level.

The holiday festivities are a collaborative effort between Athens International Airport and the ελculture cultural platform.

This Discover Greece video shows how its “I’m An Athenian Too” campaign lets Athens visitors stamp their personal “Athenian identity” on their favourite travel photos to share with the world — and possibly win them a trip back to Greece. Click on the arrow to watch the video.

Be an Athenian: It happens every time one of our holidays in Greece comes to a close: I’m at Athens International Airport, waiting for our flight home to Canada, yet part of me feels like Athens is a home I’m about to leave behind. It’s an intense, heart-felt emotion that gets even stronger if I start reviewing vacation photos on my camera in the departure lounge to pass time before boarding the plane.

The people who promote tourism to Greece understand that millions of other tourists feel exactly the same way, so they have created a clever new promotional campaign that invites Athens visitors to show the whole world what they love about the fabulous Greek capital city — using their own holiday photos.

Called “I’m An Athenian Too,” the campaign is an initiative of Discover Greece, conducted in collaboration with Athens International Airport.

The promotional program is based on a smartphone app that “lets you express the Athenian inside you” by sharing personal travel photos on social media. Users simply download the special app from the I’m An Athenian website, choose one of their favourite Athens photos, and then select a hand-drawn stamp to apply to the image to describe how it captures their feelings for the city. When they share their stamped photo on social media, the picture will automatically appear in the campaign, and their name will be entered into a contest to win great prizes, including trips for two to Athens. 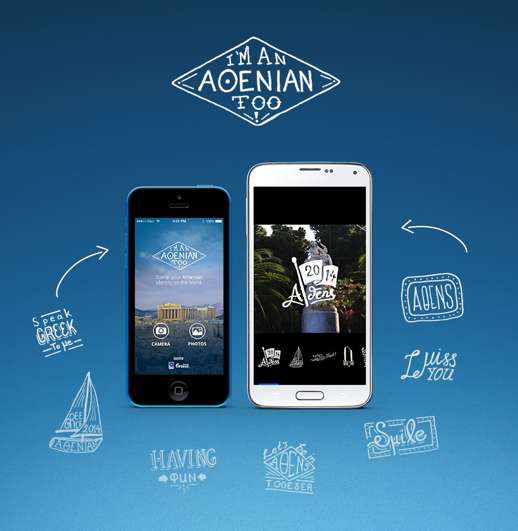 If you’ve been to Athens and want to enter the contest, click here to obtain further details and to download the app.

For those of you who haven’t been to Athens before, here are some photos from the I’m An Athenian Too campaign that just might inspire you to book a trip to this amazing historic city: 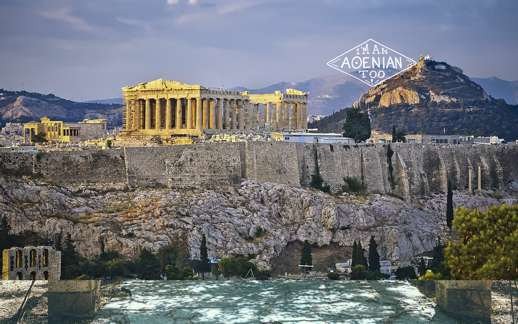 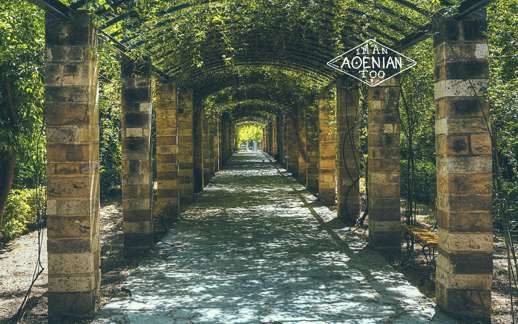 A vine-shaded passageway in the National Garden, my favourite place to visit when I want a break from the hustle and bustle of downtown Athens. The 15-hectare National Garden is a tranquil oasis of parks, gardens and ponds located directly behind the Greek Parliament Building in Central Athens. 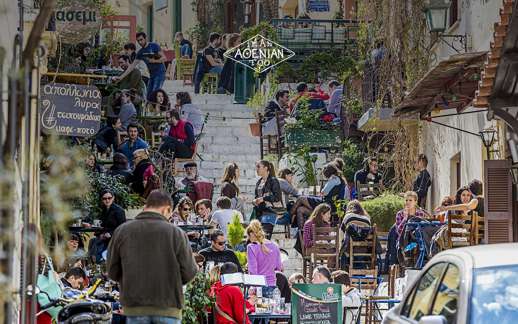 The lanes, alleys and streets of the historical Plaka neighbourhood are packed with delightful cafes, bars, tavernas and shops 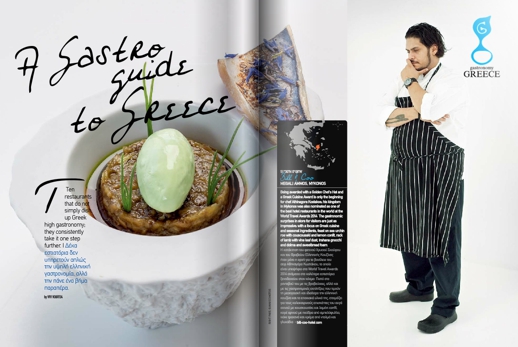 The July–September issue of 2board magazine features a gastronomy guide, suggested tours for Athens and Chania, and profiles of top boutique hotels

Tons of great tips: If you’re passing through Athens International Airport anytime this month, be sure to grab a copy of the July–September issue of 2board magazine while you’re in the terminal.

The 212-page glossy publication is packed full of useful travel tips about hotels, restaurants, and attractions at a variety of destinations — information that could come in handy during your current travels in Greece, or for planning a future holiday.

2board is the official magazine of the Athens airport. Copies are available free of charge from magazine racks situated at various locations in the terminal building.

I always find a wealth of interesting information, travel ideas and helpful research material in 2board, and this summer’s edition is no exception. In fact, it’s one of the better issues, content-wise, that I’ve seen. (And, as always, it’s packed with photos of luxurious resorts, villas and restaurants I can only dream about visiting someday … but it’s still great fun to imagine what it would be like seeing these places and photographing them with my own camera.)

Foodies will want to flip directly to page 21 for 2board‘s “Gastro Guide to Greece,” which profiles “Ten restaurants that do not simply dish up Greek high gastronomy, they consistently take it one step further.”

The guide highlights two acclaimed restaurants on Mykonos, three on Santorini, one each on the islands of Corfu, Crete and Rhodes, and two on the Greek mainland — one at Preveza and another in Halkidiki:

♦ Etrusco at Kato Korakiana on Corfu;

♦ Old Mill at the Elounda Mare Hotel at Elounda on Crete;

♦ The Squirrel, one of the restaurants at Danai Beach Resort & Villas in Halkidiki;

♦ the restaurant at SESA Boutique Hotel at Kanali beach in Preveza;

♦ The Greek, a new dining room at the Sheraton Rhodes Resort on Rhodes;

♦ Selene in Pyrgos village on Santorini;

♦ Sea Side by Notos at Santorini’s Perivolos beach; and

♦ the dining room at the Grace Santorini hotel in Imerovigli.

The Gastro Guide includes full-page photos of the respective restaurants’ chefs and some of their tantalizing creations, along with suggestions of signature dishes to try if you get the opportunity to dine at one of these fine establishments. A word of warning: don’t read this article on an empty stomach, because the stunning food photos and descriptions of the unique dishes will instantly make you feel hungry! 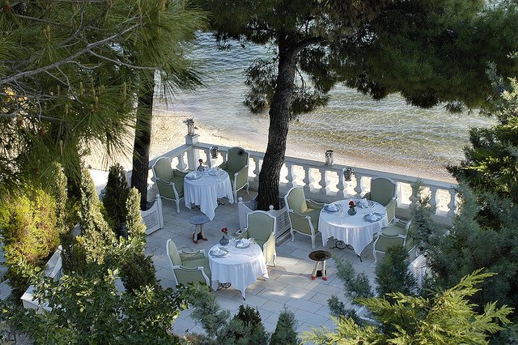 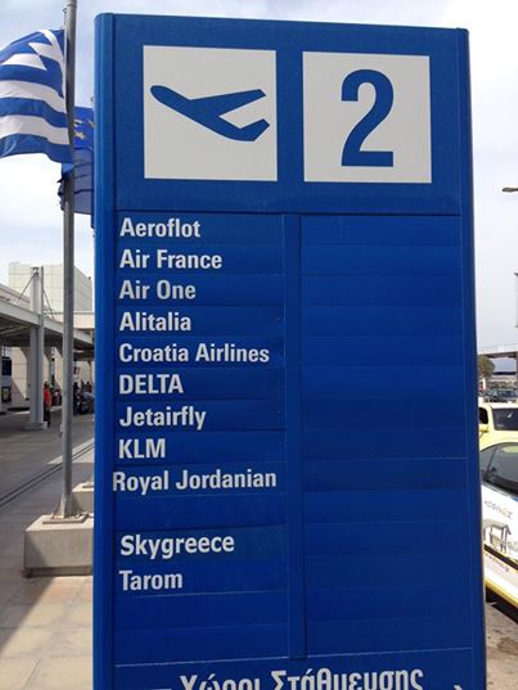 SkyGreece Airlines posted this photo on its Facebook page today, announcing that its name was just added to signage at Athens International Airport

Sign of things to come?: SkyGreece Airlines is one step closer to commencing flights — its name was added to signage on the departures level of Athens International Airport today, in preparation for tomorrow’s launch of charter service to Stockholm.

The photo shown above was posted on the SkyGreece Facebook page at what was lunchtime for the four North American cities to which it is supposed to eventually offer service — Montreal and Toronto in Canada, and New York and Chicago in the United States.

The photo was accompanied by the comment: “Officially today our sign went up at Athens International Airport,” but no further information was provided about possible schedules or fares.

The upstart airline’s last news release had been posted March 31 on its Facebook page, announcing that it had submitted documentation required to obtain all necesssary licences and permits from the American and Canadian Civil Aviation Authorities. It added that, “in order to respect the American and Canadian Civil Aviation procedures,” SkyGreece would not issue any further press releases until all required licences had been obtained.

Hours after posting the sign photo to its Facebook page today, SkyGreece added a post confirming that it will operate on a charter service basis until it secures the necessary legal paperwork to begin flying to North America, and will not comment further until that happens.

The latest post drew swift reaction on social media, quickly receiving hundreds of “likes” and dozens of comments on Facebook.

In one comment, a Facebook member said: “First flight out tomorrow departing at 17:00 hours from Athens to Stockholm, Sweden! Routes will be as of June to / from Asmara – Eritrea, Mogadishu – Somalia, Stockholm – Sweden and London Gatwick – UK. Hope to see some more coming in soon. Good luck!“

I thought the remark about flights to Africa was just a joke, but the fellow who posted the comment said he wasn’t kidding.

“The US and Canada will be coming in at some point, as I gather once the permits have been granted from their Civil Aviation Authorities. It’s not so easy when one is new and wants to come in and have some of that pie that has been enjoyed all this time by Delta, US Air, Air Transat and Air Canada. I think we just need to be a little patient,” he said.

First flight to Stockholm on June 19

The Greek Air News Facebook page subsequently posted a photo of the sole SkyGreece airplane along with a statement confirming that the airline’s first commercial flight will indeed be to Stockholm, at 17:00 on June 19.

“The airline SkyGreece signed a cooperation agreement with the Swedish Tour Operator Flyolympic.Se and on account of it flies in Europe, Africa and Asia,” an English translation of  the Greek Air News post indicates. “SkyGreece will perform and flights from – to Athens-London (Gatwick)-Stockholm (Arlanda)-Asmara (Eritrea)-Mogadishu (Somalia) For more information and ticket reservations, you can visit the official website www.flyolympic.se or FlyOlympic to your travel agent. Good start SkyGreece!!” the translated post concludes.

So perhaps there is a huge demand for flights between Greece and Mogadishu after all. Nevertheless, I’m hopeful SkyGreece will soon be able to announce fares and flights to North America — if their prices are competitive and their flight dates are decent, I would consider them for a return trip to Greece later this summer.

I previously reported on SkyGreece in posts published on the blog on March 25 2014, January 10 2014, and June 25 2013. Click on the links for each of those reports to see photos and obtain more information about SkyGreece Airlines. And stay tuned for further updates.