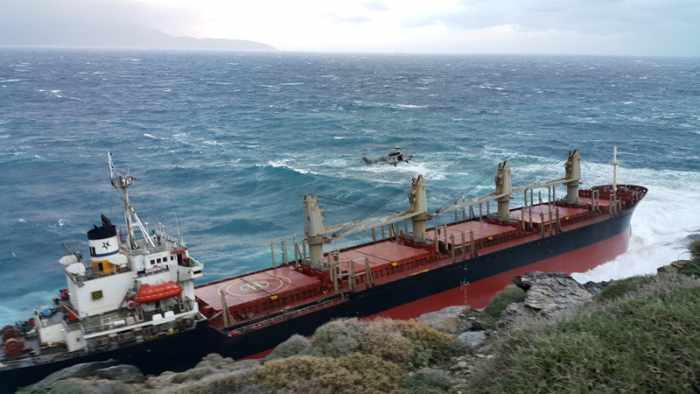 This photo from newsbomb.gr shows a rescue helicopter hovering above the sea freighter Goodfaith, which ran aground on Andros island. Click here to see a video filmed from the chopper while rescue personnel were lifting members of the ship’s crew to safety.

Ships in trouble on stormy seas

The storm disrupted ferry service to many of the Greek Islands, and impacted some of the region’s marine traffic as well. On February 10, the Melina II ferry moored at Rineia island near Mykonos ran into trouble when strong gusts broke its anchor ropes, which in turn damaged one of the ship’s propellers. The vessel and its crew of 7 was temporarily cast adrift in the stormy seas, but two cargo ships in the area rushed to provide assistance while a tugboat made its way to the ferry.

More maritime drama unfolded on Andros, where the Cyprus-flagged sea freighter Goodfaith ran aground on the island’s north coast. A rescue helicopter and several tugboats sped to the scene to help the 22 crew members off the stranded ship. Click here to read a Greek-language news report about the incident on newsbomb.gr.

With schools closed because of the inclement conditions, children on some islands entertained themselves by making snowmen while their parents and other adults braved the elements to take photos and videos of the storm and its aftermath. My Facebook news feed quickly filled with pictures of the sea-drenched harbourfront area of Parikia on Paros, hail and sleet falling on Naxos, and surf spraying two to three storeys high from waves striking seashores on Syros and Crete. Videos showed rough seas off Naxos and seawater washing across walkways and patios on the Mykonos harbourfront. (How the photographers managed to hold their cameras steady in force 10 Beaufort winds is beyond me!)

Below is just a small sample of the hundreds of storm photos and videos I saw people sharing on social media this week. 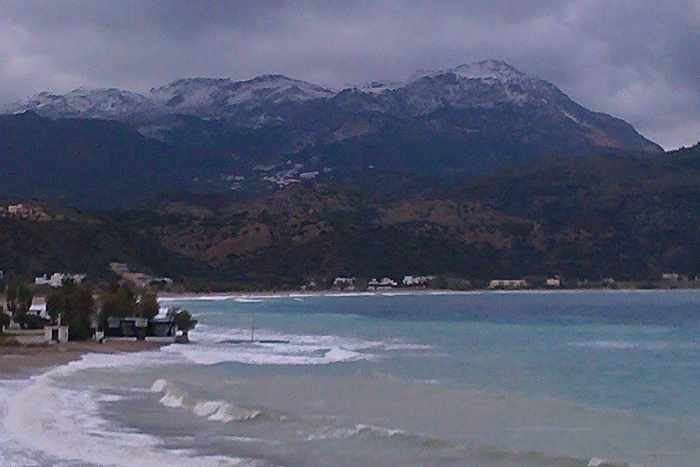 Stormclouds pass above snow-tipped mountains while waves churn against a beach on Karpathos. This photo, by George Maloftis, was shared on the Karpathos FM Facebook page 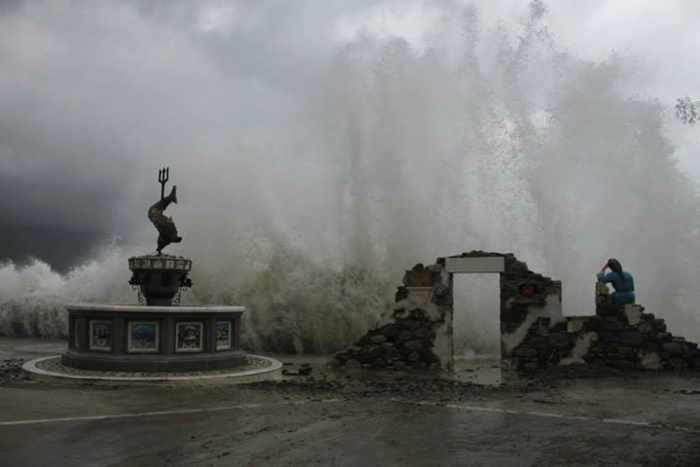 Surf sprays high in the air as waves strike the seashore at the Diafani waterfront on Karpathos. This photo and the two below were shot by John Makrimanolis, and shared on the Karpathos Island Facebook page. 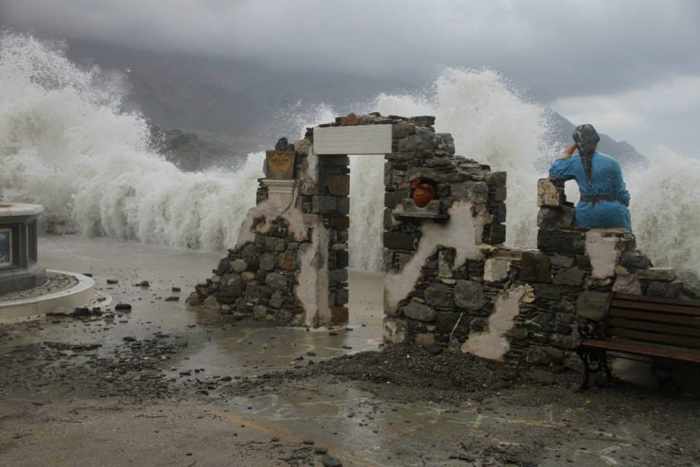 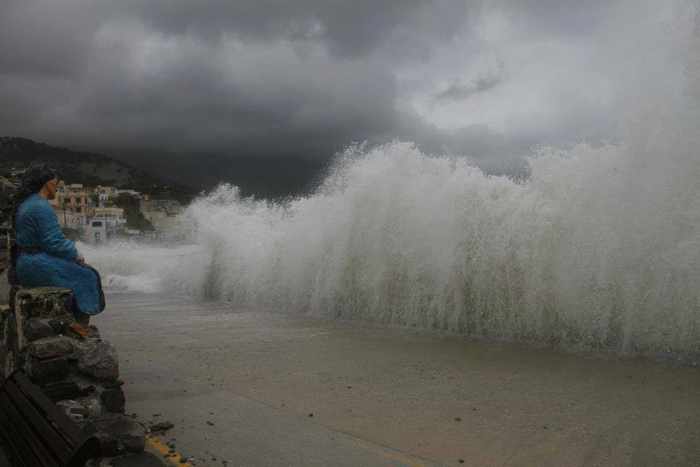 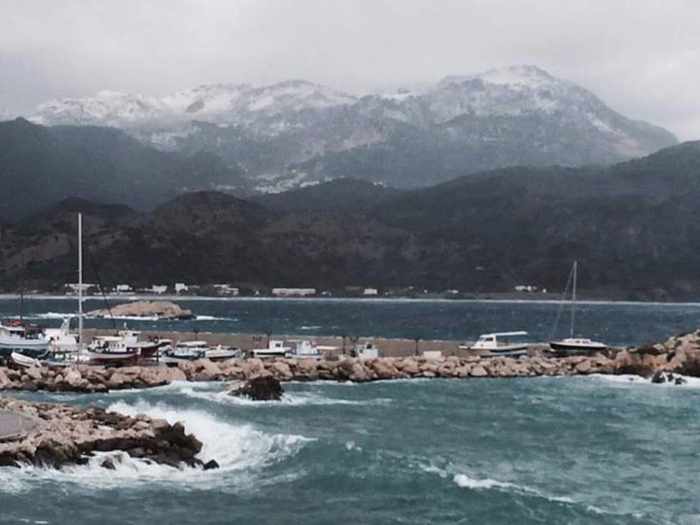 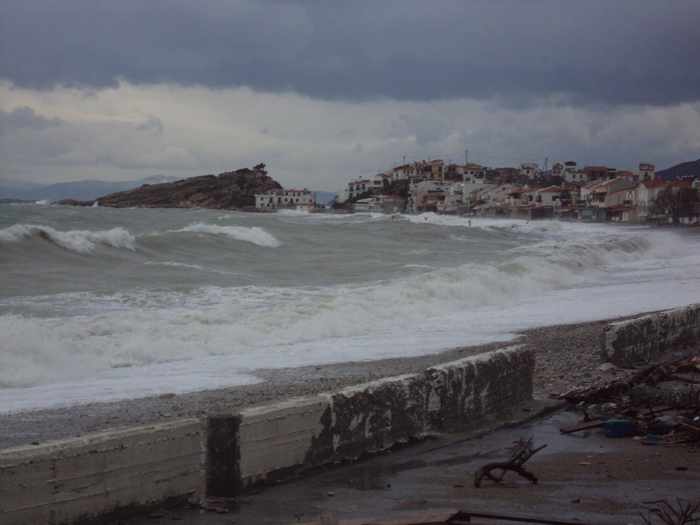 Sea swells slam against Long Beach at Kokkari village. This photo, along with the three below, were posted on the Kokkari Facebook page 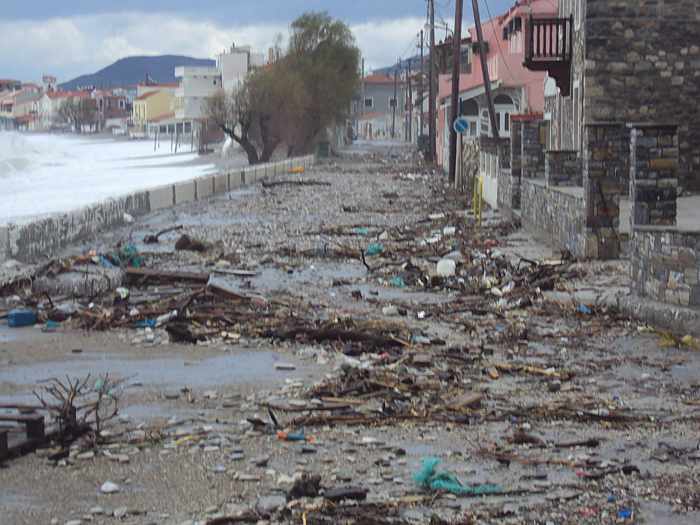 Debris litters the full length of the road beside Long Beach in Kokkari. Click here to read a February 11 report from i-samos.gr (Σαμιακή Γνώμη) that includes 30 photos showing severe storm damage to the village seafront. 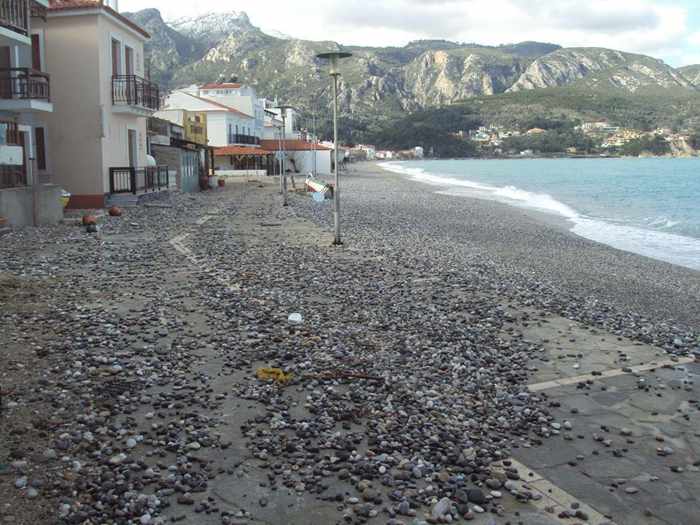 This view, from the opposite end of Long Beach, shows that much of the strand’s pebble surface was swept onto nearby streets 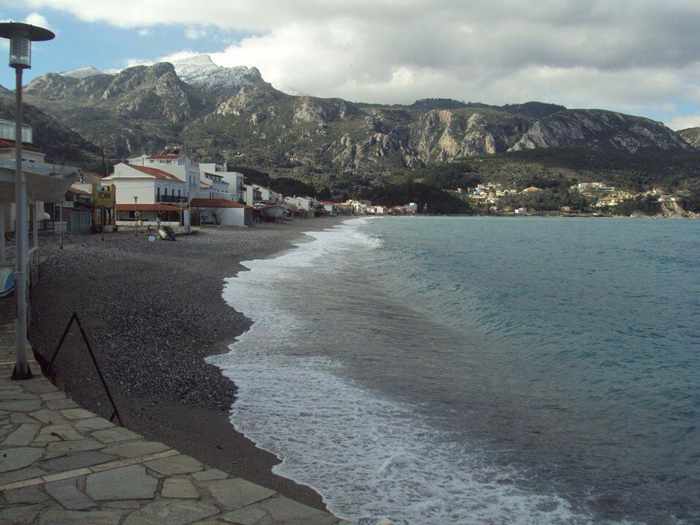 Calmer seas prevail at Long Beach as the storm system leaves Samos in its wake. Clean-up work commenced once the wind subsided.

Nikos Chatziiakovou shot this “Samos Winter” video with a GoPro 4 camera mounted inside his car.

The strong northerly winds and powerful waves inflicted extensive damage at the port of Evdilos on Ikaria island.  According to a February 13 news report on ikariamag.gr, the storm damaged pavement, lamp posts, guardrails and other infrastructure, and shifted boulders  out of position at a pier facility under construction. The fierce winds began battering Ikaria around February 6, and reached their apex on the 10th and 11th. Although the gusts have subsided somewhat, local authorities are still waiting for the winds to die down so they can perform a closer damage inspection.

Snow-dusted hills on Tinos, seen in a Facebook photo by Αρναδος Τηνου. Click here to view a February 11 Tinos Today  article with nearly 30 photos of snow scenes at Arnados, Triantaros, Koumaros, and other villages. 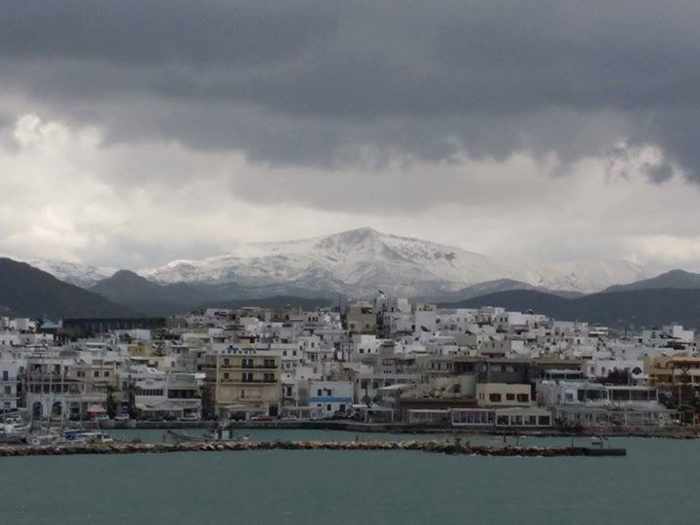 This dramatic photo shows stormclouds looming above Naxos Town after dropping snow on the island’s mountains on February 11. The picture was shared widely on social media, and apparently was shot from a deck on the Blue Star Patmos ferry by a Mr Karmiri.

Floodwater inundates the waterfront of Apollonas village at the northwest tip of Naxos in this image shot by Akrogiali Internet Cafe. Click here to see more photos of Apollonas in a February 13 Naxos News report about the water damage. Snowstorm photos can be seen in the website’s February 10 report, while a February 12 article featured more photos and a video. 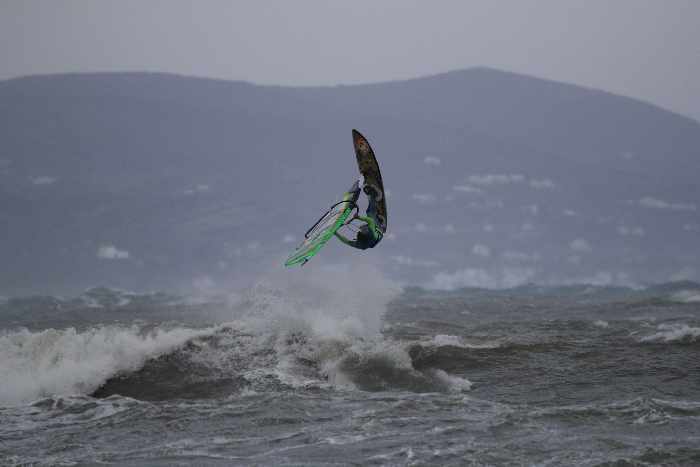 Manolis Orfanos took advantage of the strong winds to demonstrate his professional windsurfing skills. This was one of several photos, shot by Stelios Pagonis, that Manolis posted on Facebook. 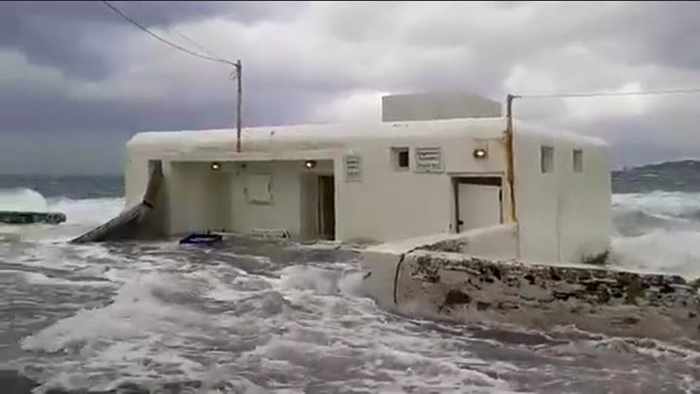 Seawater surrounds the public restroom facility on the Mykonos waterfront, near the Delos ferry boat jetty. This photo was shared on Facebook by Achim Eckhardt from Post Card ME Mykonos-Greece. 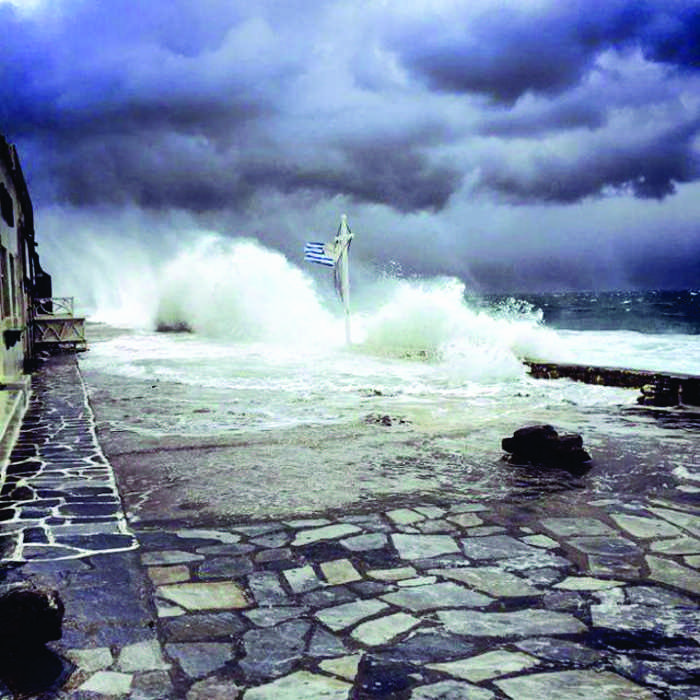 Dark clouds menace as waves crash ashore on the seaside promenade leading from the Mykonos Town Hall to the Paraportiani church. This strip is the location of the Cooh Club, Jackie O’ and Babylon bars. The photo was shared on Facebook by Skandinavian Bar. 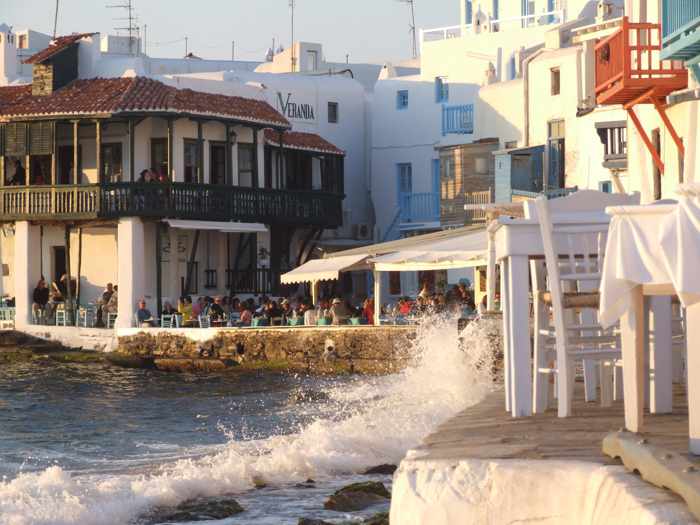 During the April to October travel season, tourists flock to the scenic Little Venice waterfront of Mykonos Town for drinks and meals at the sunset-view bars and restaurants lining the seaside strip … 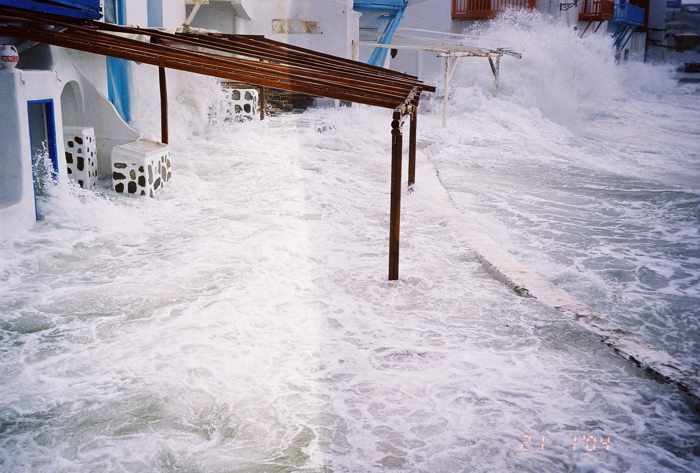 … but this week the terraces were completely submerged with sea water as harsh winds and high waves pummelled the Mykonos waterfront. This photo was posted on Facebook by Galleraki, one of the strip’s popular bars.