A Sifnos island icon: The Church of the 7 Martyrs 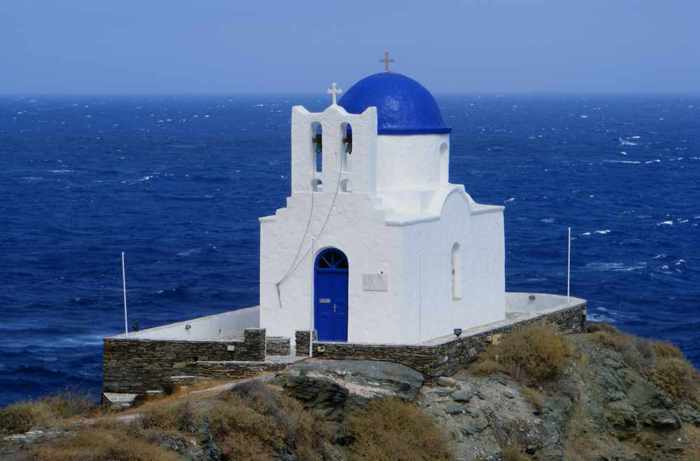 Like hundreds of other picturesque chapels in the Cyclades, the Church of the 7 Martyrs on Sifnos has a traditional Cycladic design with whitewashed walls and a shiny blue dome … 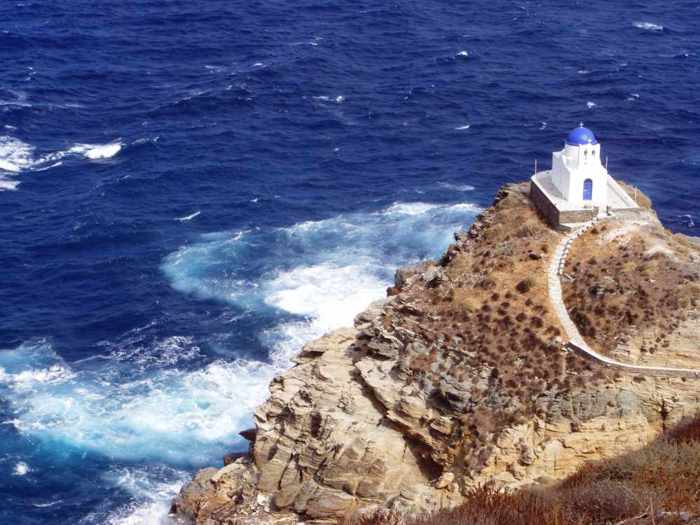 Windswept wonder: We have seen hundreds if not thousands of blue-domed churches in Greece, but the Chapel of the 7 Martyrs on Sifnos easily ranks as one of the most memorable.

We got to see it during a four-day visit to Sifnos in late September 2007, and were practically blown away by the experience — and not just because the chapel is such an impressive sight.

It was warm and sunny when we arrived at Sifnos on a Friday afternoon, but conditions changed abruptly. Within less than two hours, near gale-force winds began blowing, followed overnight by thick, dark stormclouds and periods of light rain. The gusts were so strong that rough seas forced the cancellation of ferry service for the next three days. But we didn’t let the unrelenting wind stop us from sightseeing. Occasional breaks in the cloudcover motivated us to get out and explore,  and we spent one day hiking to the villages of Artemonas, Apollonia, Kato Petali and Kastro.

A breathtaking sight below Kastro village

We got our first glimpse of the Chapel of the 7 Martyrs while following a clifftop footpath that winds along the the east side of Kastro, about 90 meters above the sea. It was breathtaking to look down and suddenly see the whitewashed, blue-domed church far below, perched atop a rugged, rocky peninsula that juts into the Aegean. We saw a group of tourists making their way down a twisting, stone-paved path that leads to the church, and decided to make the trek as well.  But the blasting winds actually stopped us in our tracks a few times, and more than once nearly blew us off balance. When one particularly strong gust nearly knocked down a woman walking behind me, she and her companions turned back, saying they felt it was too dangerous to venture any further. But we plodded on, climbing down dozens of steps and then up a short hillside to reach the church.

The wind was even worse here, but we couldn’t go inside the church to escape it because the door was locked (apparently the chapel is open only several times a year for special occasions and feast days.) It was almost impossible to hold our cameras steady to take photos, even on the south side of the building where the wind was partially blocked. In fact, the blustery conditions were so unpleasant we stayed only a couple of minutes to view the coastal scenery before making a hasty climb back to the sheltered lanes in Kastro.

Despite the inclement conditions, it was well worth braving the elements to briefly see the chapel. If anything, the wind and the surrounding whitecapped sea gave the Chapel of the 7 Martyrs even more of an exhilarating “wow” factor.

Below are several more of our own photos of the church. You can see full-size versions of them, along with 20 additional images, in my Chapel of the 7 Martyrs album on Flickr.  At the bottom of the post are two wonderful pictures of the chapel that were shot by photographers from France and Greece. 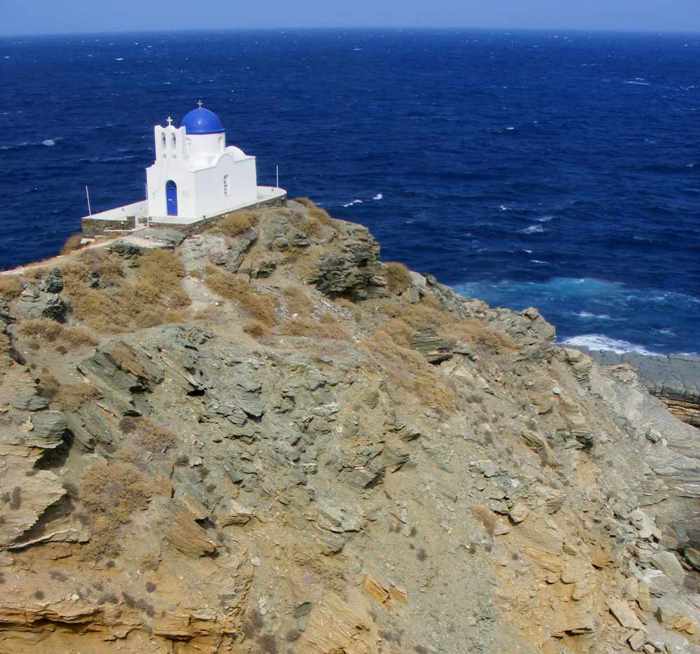 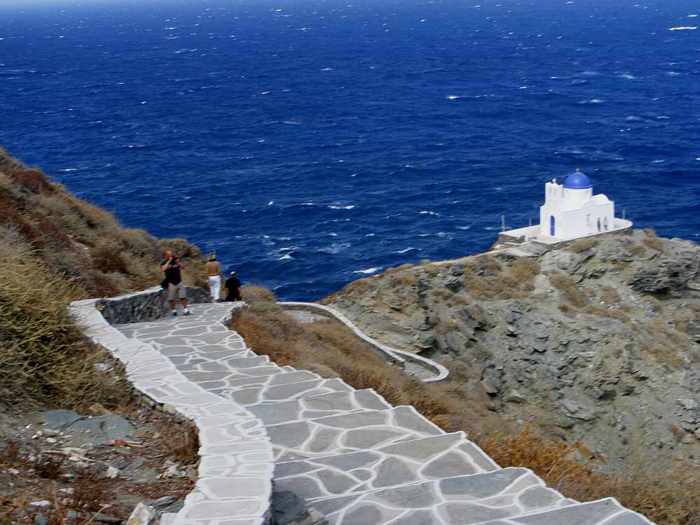 Dozens of stone steps lead down the cliffside to the church 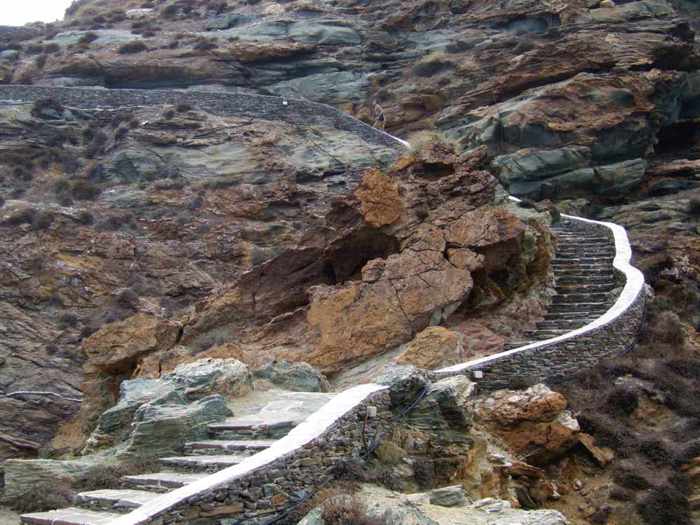 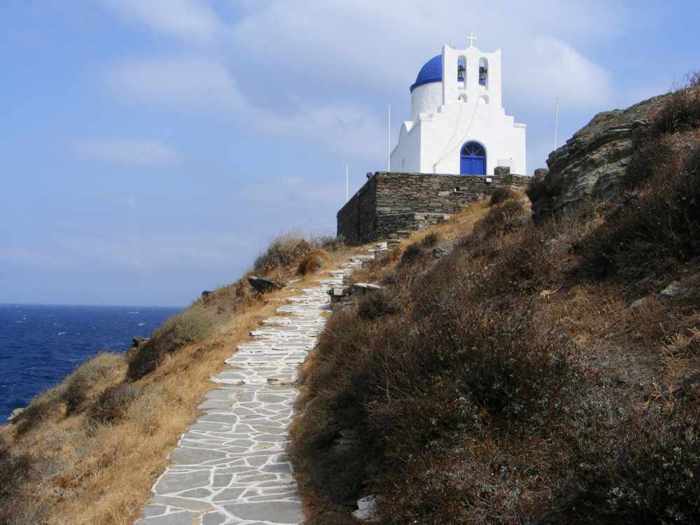 After descending dozens of steps, visitors face a short uphill climb to the chapel. A terrace that wraps around the church offers amazing views of the sea, the Sifnos coast and Kastro village, but we weren’t able to enjoy the scenery because of the high winds. 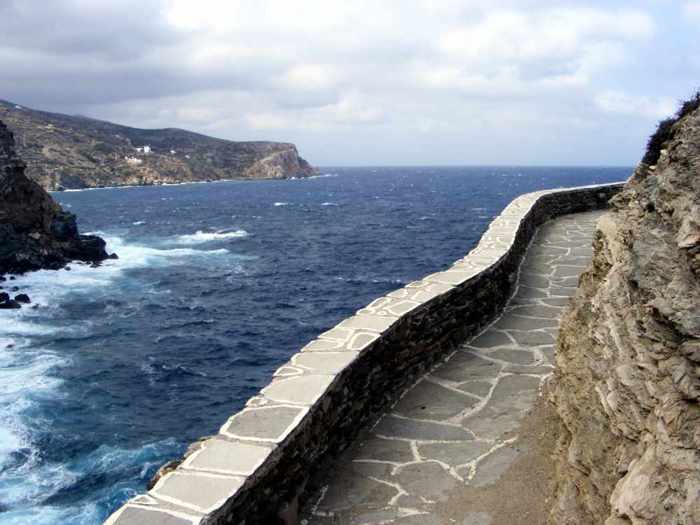 Looking northwest along the rugged coast of Sifnos 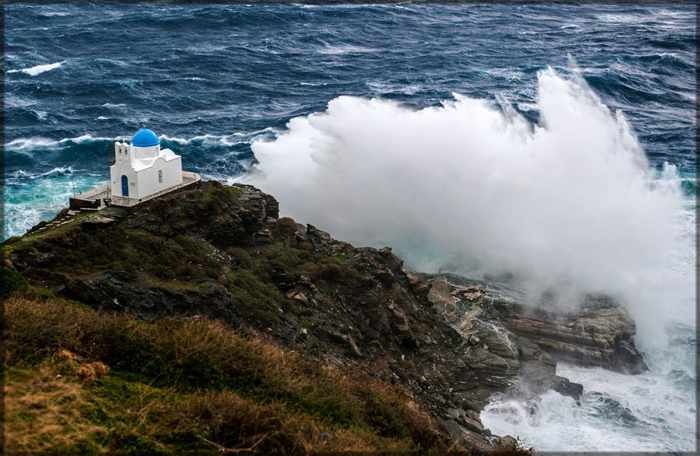 A view of the Chapel of the 7 Martyrs in weather conditions even more severe than we experienced. This image, which has been widely circulated in social media, was captured by Sifnos photographer Giannis Kontos. 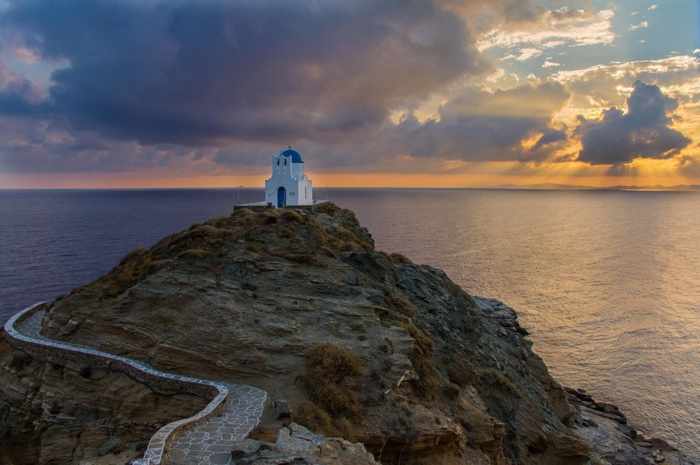 Another image that has been shared extensively on social media is this sunset view of the chapel, shot by photographer Charly Lataste.

The allure of Astypalea