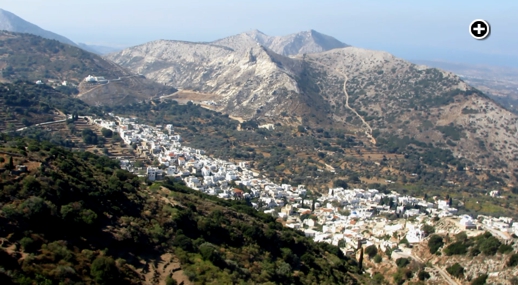 A view of Filoti village, captured from a video I shot while we were riding a bus on Naxos last October. Click the image to see a larger-size photo.

Filoti on foot: There are more than 30 different mountain villages on Naxos, but Filoti makes a bigger and more memorable impression than most when you approach by bus, by car or on foot.

That’s not just because Filoti is the largest village on the island, but because of its dramatic amphitheatrical layout across the lower slopes of Mount Zas, the tallest mountain in the Cyclades.

The village looks quite impressive when it first comes into view as you approach on the road from Chalki. The first time I caught a glimpse of Filoti eight years ago, I was so fascinated by the sight that I had to stop the car so I could get out and take a better look.  Seeing it for the second time last October, while walking there from Chalki, was equally as breathtaking.

But the village is even more spectacular to see from numerous vantage points on the road that climbs the mountainside high above Filoti en route to Apeiranthos and other hamlets to the northeast. If you’re driving a vehicle, there are a few lookout points where you can pull over and get good views of Filoti. But if you’re riding on a bus, you’ll get to see the village much better and for longer periods of time. We saw Filoti on four bus rides to and from Apeiranthos and Koronos last fall, and I was blown away by the views each time.

Although Filoti is a predominantly residential area, the road that runs through it is lined with taverna and cafés, a few shops and fruit markets, banks, a post office and various local businesses and municipal service offices. Top tourist attractions include the Panagia Filotitissa (Our Lady Filotitissa Church) and the Venetian-era Barotsi Tower, as well as a café-lined main square shaded by a giant plane tree. 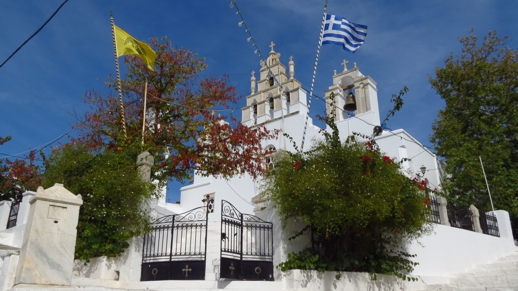 A memorable visit to Panagia Filotitissa

Our favourite moment in Filoti occurred while we were taking photos outside Panagia Filotitissa. As I was snapping a picture of the church’s beautiful belltower, an elderly woman, dressed head-to-toe in black, quietly emerged from one of the church’s front doors and beckoned us to approach. She could speak only a few words of English, and I could understand even less of her Greek, but her gestures made it clear we were being welcomed to the church and urged to take a look inside. The interior is marvellous … if you ever get to Filoti, be sure to have a look inside the Panagia if the church is open.

There are a few photos of the church interior, along with more than 200 pictures of the town, in my Filoti Village album on the MyGreeceTravelBlog Flickr page.

Below is a video I filmed while we were walking through the village. The first minute of the clip shows the narrow lane that leads to Panagia Filotitissa, while the second half of the video shows part of a residential area we explored near the opposite end of the village. Although restaurants and shops are located along the flat (but slightly sloped) main road, the rest of the village is built on hillsides. That means you’ll have to do a lot of stair climbing if you want to wander around Filoti!

The first minute of this clip shows the walk to Panagia Filotitissa. The rest of the video shows some residential “streets” on the opposite side of the village.

A full moon over Santorini

Sunbed signs point the way to beaches on Kos