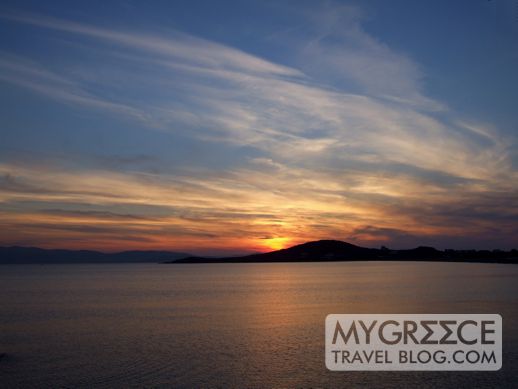 We have watched several gorgeous sunsets, like this one in May 2006, while enjoying wine and delicious dinners at one of Fotis Taverna’s roadside tables

First choice: I can’t help but wonder if we ever would have visited what ultimately became our favourite taverna on Naxos if we had eaten a bigger meal at another restaurant farther down the road just a short time earlier.

On May 18 2006, we spent the better part of a day walking for miles down the beautiful beaches that stretch one after another along the west coast of Naxos. We started off at Agios Prokopios beach, a short walk down the hill from Hotel Kavos where we were staying. After hiking some trails on the rugged, rocky cape at the northwest tip of the beach, we gradually made our way along the long, sweeping arc of sand that extends about a mile before reaching the island’s main west coast road, where there’s a strip of restaurants, minimarkets and other businesses serving locals and tourists alike. (It’s often referred to as the Agios Prokopios resort area.)

We moved onto the paved highway when we approached the southern end of the beach, and noticed three sets of tables and chairs placed under a pair of shade trees on the beach side of the road, perhaps five or six feet above the sand. A white and blue restaurant, Fotis Taverna, stood on the opposite side of the road, its west wall built literally right against the edge of the pavement. At this point, the road makes a sharp bend between the taverna and the tables under the trees, and is barely wide enough for two vehicles to pass. When we saw how quickly cars sped along the road, even as they neared the corner, we both commented that the three outdoor tables seemed to have been placed in an unduly dangerous location. “That looks like an accident waiting to happen,” I said. The restaurant wasn’t yet open for business, so no customers were dining on the precarious corner.

We continued walking all the way to Plaka beach, where the mainly sunny and warm weather suddenly changed as a thunderstorm system blew toward Naxos from the west. The temperature plunged as cool breezes turned to strong winds, and when light rain started falling, we decided to turn back. We were only a few hundred feet from the Agia Anna beach resort area when it began to pour, so we sprinted to the nearby Gorgona taverna for shelter. Since it looked like the rain would last awhile, we ordered an early dinner and enjoyed some scrumptious stuffed aubergines, grilled vegetables and wine while watching the storm from the restaurant’s covered seaview terrace. The rain stopped by the time we finished our meal (which cost €18.50, by the way), and the sun began shining through the thinning clouds when we hit the road for our long (45-minute) walk back to the hotel.

When we passed Fotis taverna, the husband and wife proprietors were setting tables in the restaurant. They said hello and beckoned us to the door, urging us to check out the meat, fish and vegetable items on display in a glass case just inside the entrance. “It’s all very good,” Fotis assured us. We told him we had just eaten, but might return for dinner another time. As we waved and turned to walk away, we saw that the three tables across the road had an amazing, unobstructed view to the west — perfect for sunset watching. We hadn’t noticed that when we had approached a few hours earlier from the opposite direction. We looked at each other, then back at the tables, and realized we were both thinking the same thing: why not stop to have a drink and enjoy the view? I was apprehensive about sitting so close to a busy road, but with the beautiful scenery in front of me I quickly forgot about the traffic passing only a couple of feet behind me.

We ordered a half carafe of wine and watched waves lapping lightly against the beach as the sun commenced its slow descent toward the horizon. We weren’t feeling hungry, but when we went inside the restaurant to take a quick peek at what Fotis was offering for dinner that night, we couldn’t resist ordering a huge swordfish steak that was priced at just €8. Fotis brought it out to us, grilled to perfection, along with some bread, roasted potatoes and a Greek salad. The meal was wonderful and so was the sunset, which we watched while sipping a second half-liter of wine. After dinner, Fotos brought us two complimentary shots of home-made raki, which left us both pleasantly tipsy for the uphill walk to the hotel. It was a fun way to wind down a terrific day on Naxos.

We didn’t get back to Naxos until May 2009, this time arriving at the island after several days on Amorgos. When our ferry sailed past Agios Prokopios on its way to port at Naxos Town, I used the zoom on my camera to see if I could spot Fotis taverna. It was still there — I could even see the blue tables and chairs on the edge of the road, above the beach. I already knew where we’d be having dinner that night!

Sure enough, we headed to the taverna that evening, and were surprised that Fotis remembered us — even though it had been three years, and he had probably served hundreds of customers from around the world in the meantime. Just like before, we sat next to the road and watched the gorgeous sunset while enjoying wine and a delicious meal of Greek salad, lamb souvlaki and pork souvlaki. (We had both wanted lamb, but there was only one serving left. So we ordered the two different dishes to share. The pork was excellent, but the lamb was outstanding — probably the best souvlaki we’d ever eaten in Greece.) The price for the meal, which left us stuffed and satisfied, was €21.

Two days later we were walking down the road to Agios Prokopios, on our way to Plaka beach, when a pickup truck pulled to a stop beside us. It was Fotis, who told us we had forgotten a hat at the restaurant. It was our last day on Naxos, and we had planned to have dinner at the taverna, so we told Fotis we’d pick up the hat later. After another long day of walking in the sunshine, we were looking forward to relaxing with a good, large meal at our usual seaview table, so we made our way there.

Luckily, one of the three tables was still available when we arrived. If we had been only a few minutes later, we would have been out of luck: several couples came along for dinner, looking dismayed that no outdoor seats remained. (Although the restaurant’s awning-shaded dining room is open-air on the west side, and is a great spot for sunset viewing, we didn’t want to dine indoors. The late-comers sat inside, and looked content with the tables they got there.) We sat back with a glass of wine and then went into the restaurant to see what Fotis had in the display case. A large red snapper caught my attention, so we ordered that plus lamb baked with tomatoes, eggplants stuffed with onions, tomatoes and green peppers, and baked tomatoes stuffed with rice, herbs and spices.

Grilled snapper and a stunning sunset

While we waited for the meal, we drank our wine and enjoyed another stunning Naxos sunset — and watched as Fotis walked over to some rocks on the seaside below us, where he gutted and cleaned the fish I had ordered. That left no doubt it was fresh! Just like the last time, Fotis grilled the fish to perfection, and the other dishes he brought us were delicious, too. It was another incredibly satisfying meal with congenial, attentive service from Fotis, his wife and their daughter. This time the bill came to €34, easily one-third more expensive than any of our previous dinners, but the snapper had been big and fresh fish is expensive in Greece. Considering the quality — and quantity — of the food, we thought the total price was more than reasonable. And, once again, Fotis brought us complimentary glasses of his raki. Dan didn’t want any, so I drank both shots and left the restaurant feeling incredibly light-headed. How I made it back up the hill to the hotel without stumbling, I’ll never know!

We haven’t been back to Naxos since, but you can be certain we’ll be going to Fotis taverna for our first dinner the next time we visit the island.

Below are more photos we’ve taken at Fotis taverna. 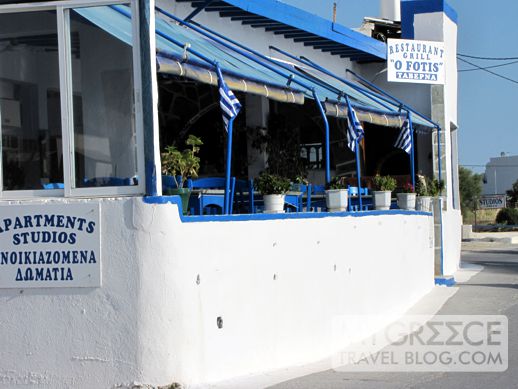 The west side of the taverna is open-air, and shaded by awnings. Although the tables next to the low wall offer excellent sunset views …. 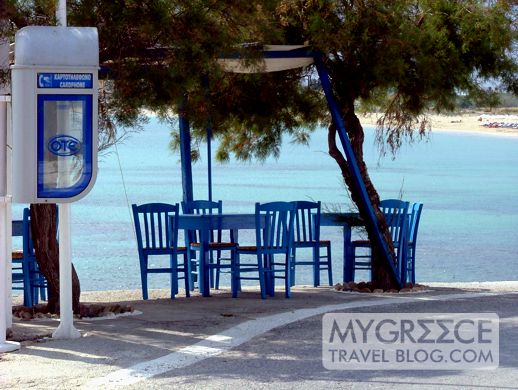 … our favourite seats are under the trees on the edge of the road, above the beach 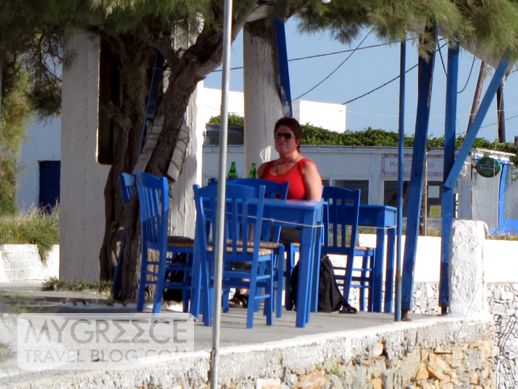 A woman enjoys a tall, cold bottle of Mythos at one of the roadside tables … 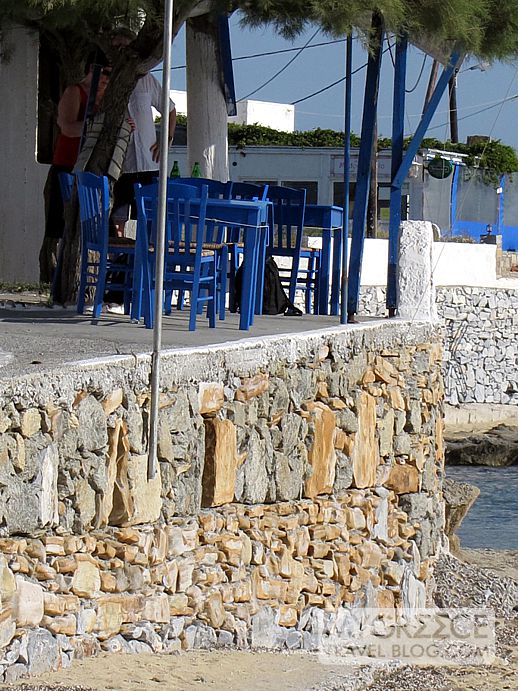 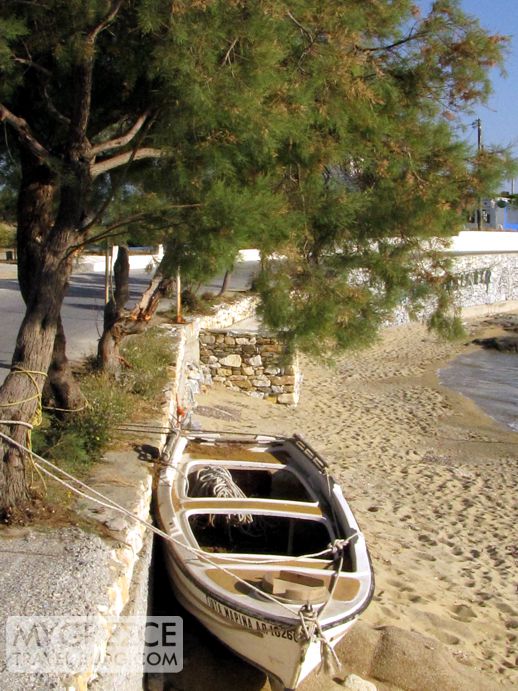 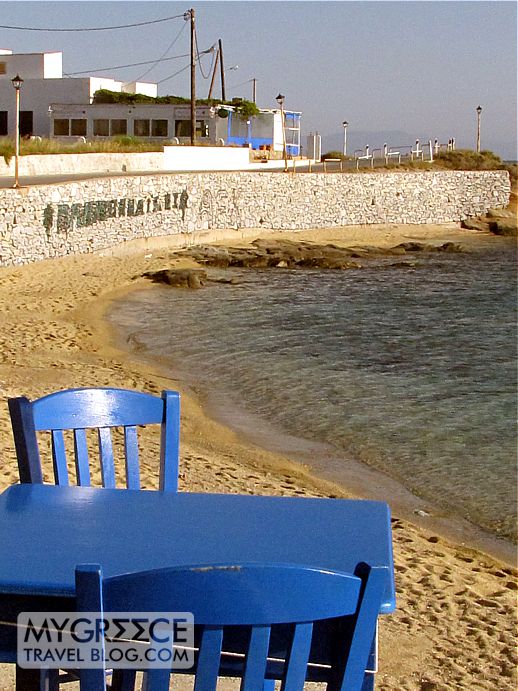 Agios Prokopios beach comes to an end below Fotis taverna; Agia Anna beach is just a short distance past the bend in the road 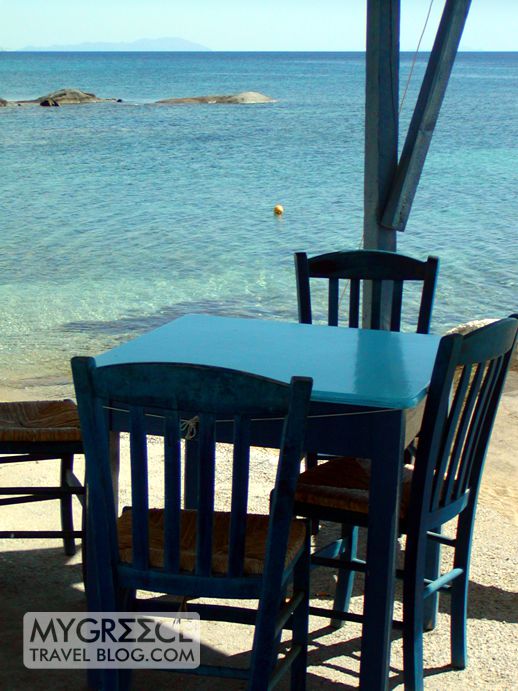 The outdoor tables overlook the sandy beach and crystal-clear sea, and have great views of Paros island to the west 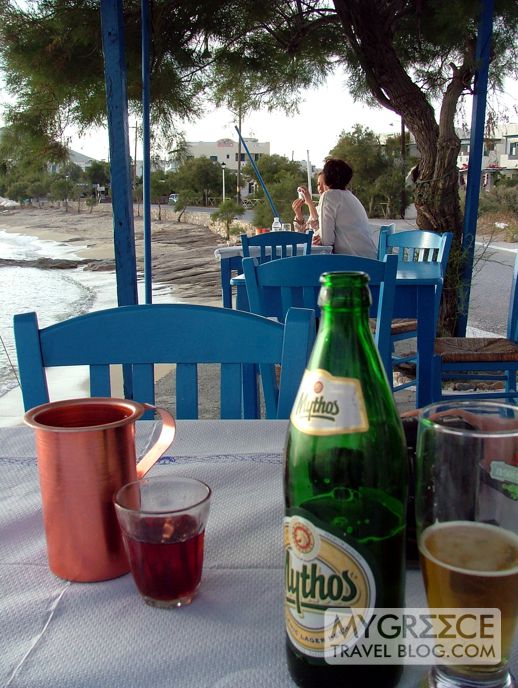 The tables look much more inviting with Greek wine and beer on them! 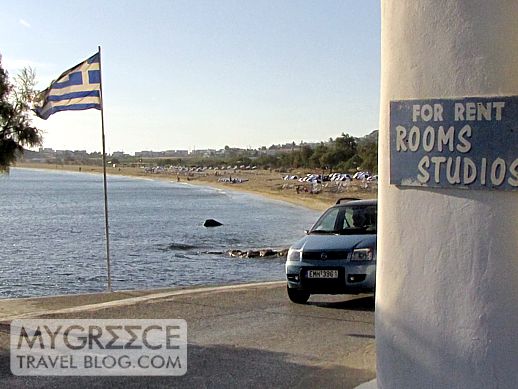 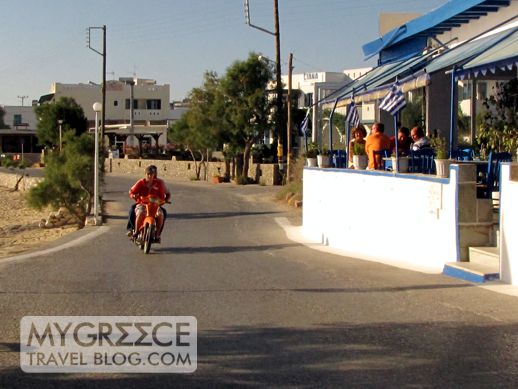 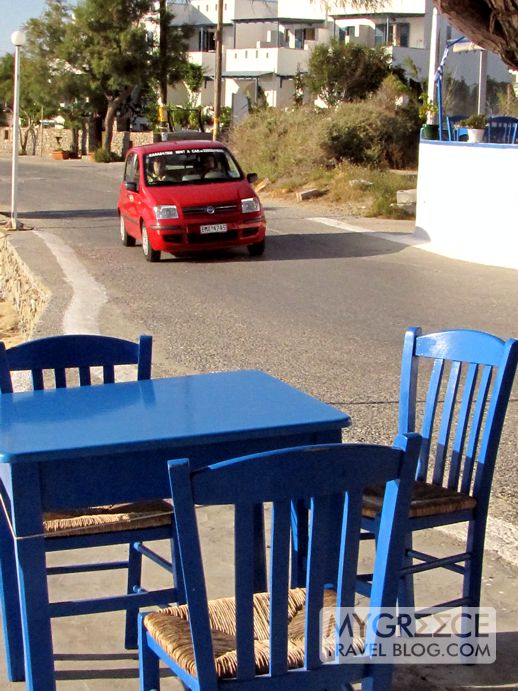 I was nervous the first time I sat in the chair next to the road … but the beach, sea and sunset views quickly took my mind off the passing vehicles 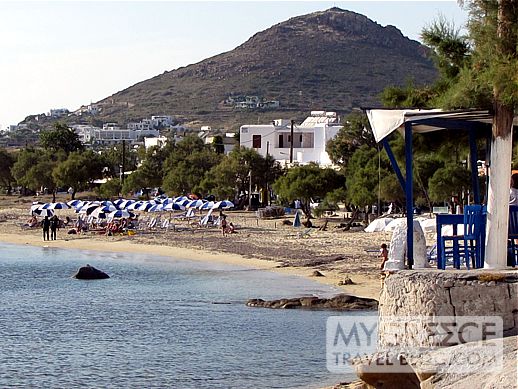 A view of the roadside tables at Fotis Taverna, right, lounge chairs and umbrellas on Agios Prokopios beach, and Stelida mountain in the distance 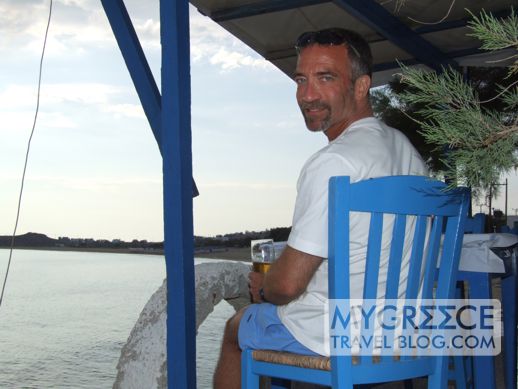 Relaxing with an ice cold Mythos at my favourite seaside table 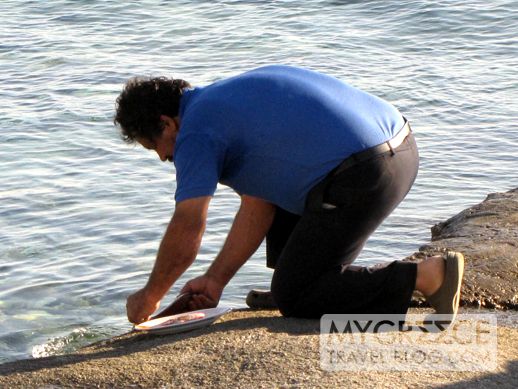 That’s Fotis, proprietor of his namesake taverna, gutting and cleaning the fresh red snapper I ordered for one of our dinners 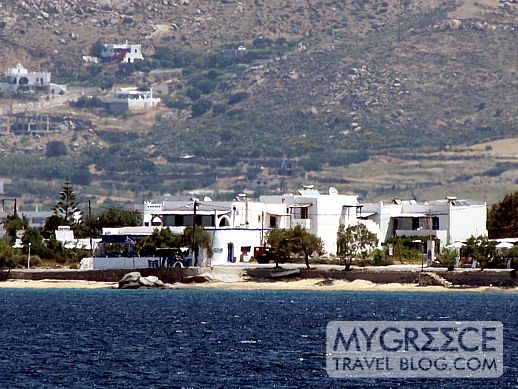 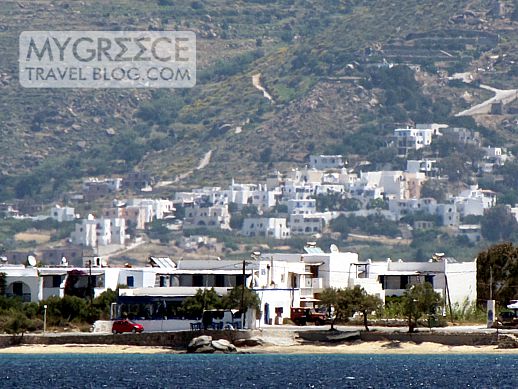 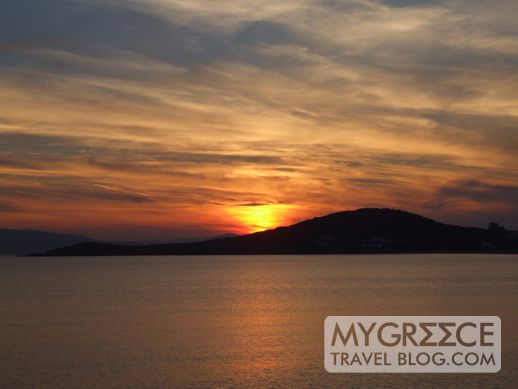 One of the sunsets we enjoyed from our beachside table 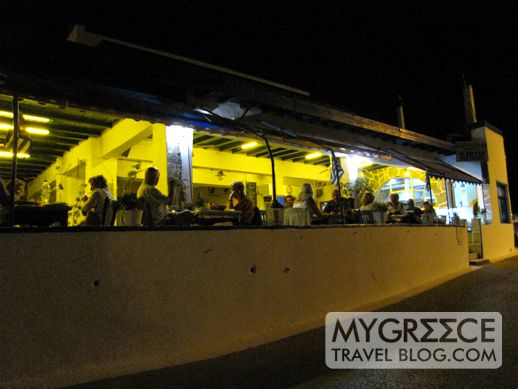 A night view of tourists enjoying dinner at Fotis Taverna 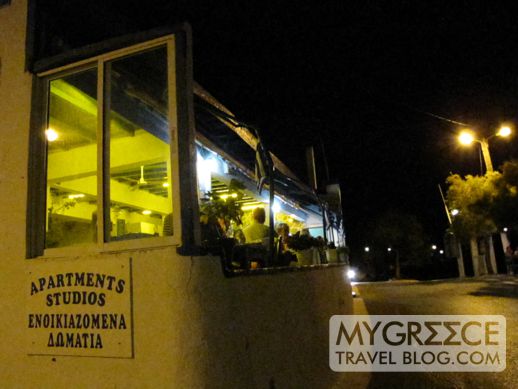 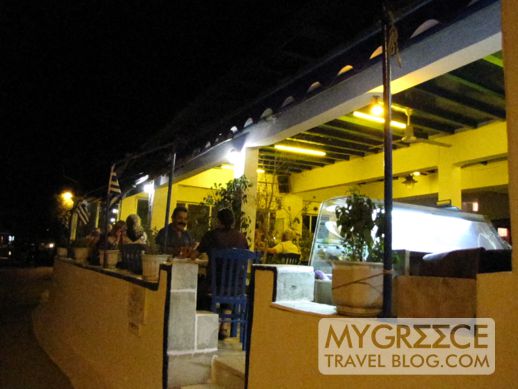 The taverna’s fish, meat and vegetable selections are on display in the refrigerated display case just inside the entrance 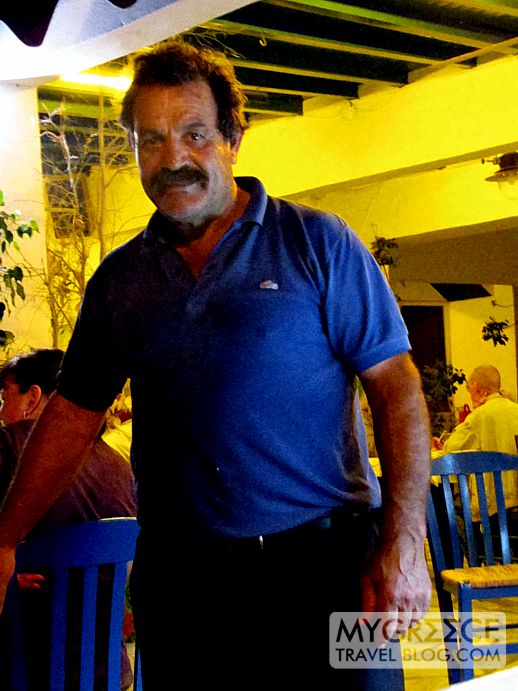 Fotis, the friendly host who remembered us after a three-year absence