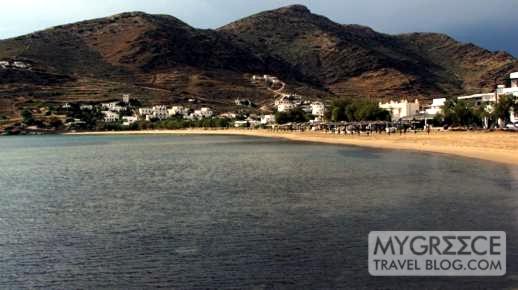 The golden sandy beach near Gialos Port on Ios

Hello Gialos: When I told a friend back in the spring that we would be going to Ios, she wondered why. “It’s ugly!” she scowled. “Every time the ferry stops there on our way to Santorini, I think the island looks like a giant lump of rock.” We had seen Ios several times from ferries, too, but never considered it “ugly.” It always looked, to us, like a typical Cycladic island: a rugged landscape of rocky, almost barren mountains dotted with whitewashed cube-shaped buildings; beautiful beaches on sun-soaked bays along the coast; and gorgeous blue waters of the Aegean Sea all around. When we finally stepped onto Ios soil for the first time ever back in May, the island appeared much nicer than we had expected. Given its notorious reputation as a non-stop summer party place for kids in their 20s, we had thought Ios would be somewhat scruffy and dumpy, but it was anything but. In fact, it looked rather pretty.