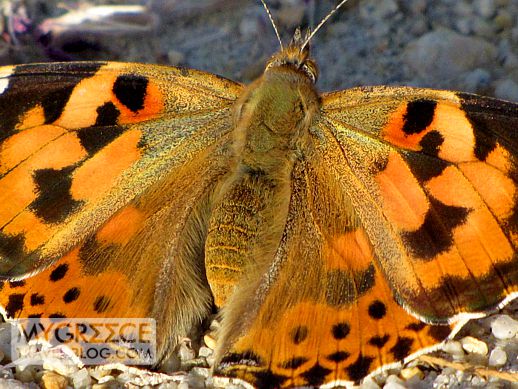 A butterfly rests near Agia Anna beach on Naxos island. This particular species has the hallmark characteristics of a Painted Lady (Vanessa cardui)

Winging it: Back in late April, when southern Ontario experienced an irruption of Red Admiral butterflies, I recalled the time our island bus tour on Paros skipped a scheduled stop at the famous Valley of Butterflies — because there were none to be seen.

That was back in mid-June 2005. We had signed up for a day-long Orbit Travel excursion that would take us to places right around the island, including an afternoon visit to Petaloúdes, the butterfly valley 6 km from the port town of Parikia. I’d read about the Valley in my Greece travel guidebooks; they described Petaloúdes as a Paros must-see attraction during summer months simply because of the staggering numbers of Jersey tiger moths that would swarm the area. We had been impressed with the Butterfly Conservatory near Niagara Falls, so we thought it would be neat to see an entire valley teaming with tiger moths.

Unfortunately, it was not meant to be.