The Amazing Mykonos, a aerial video production by Aslanis Films

Air time: I’m willing to bet that the first thing a lot of you thought, when you read the headline for this post, was: “Oh here he goes, droning on about Mykonos again!”  Well, this time it’s the folks at Aslanis Films — a moving image production company — who are doing the actual droning. And I mean that quite literally.

This 1-minute clip, which was created as a promotional video for their cinematic production services, shows amazing aerial views of popular Mykonos attractions that the vast majority of visitors will only ever get to look at from sea or ground level — the Mykonos Town harbour and Old Port, the Delos island ferry boat pier, the Little Venice seafront and the iconic row of windmills on the Alefkandra hilltop. (The first five seconds of the clip shows the drone that carried the video camera into the air for the film shoot.)

Aslanis Films specializes in commercials, music videos and video editing, and is spending the summer on Mykonos to film Little Venice, Super Paradise beach and numerous other island locations for the Travel Channel. You can view screen shots from some of their video shoots on the Aslanis Films Facebook page.

Fishing for yachts at the Mykonos Old Port 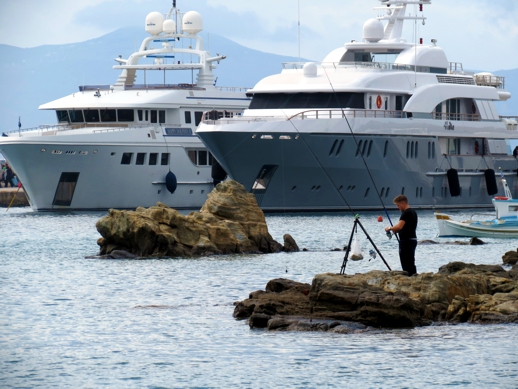 Getting ready to reel in a big boat? A man fishes from rocks in the Mykonos Town harbour, near the charter motor yachts Happy Dolphin II (left) and Hadia. We saw the Happy Dolphin II one week later while we were on Ios island (in mid-May of 2013). The 40-meter ship can sleep 13 guests in 5 cabins, and has a crew of 9. What a way to cruise the Greek Islands! You can view more photos of the 40-meter luxury yacht in my Happy Dolphin II at Ios album on Flickr.

Pic of the day: The Gialos port area of Ios 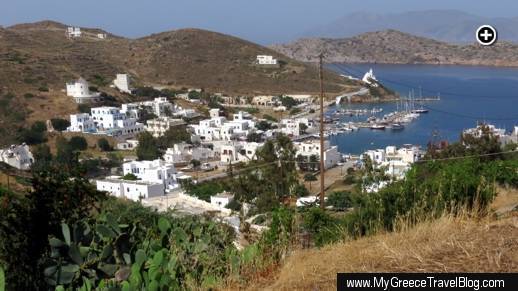 Part of the Gialos port and harbour area of Ios, as seen from a vantage point on the footpath to Chora. Click the photo to see a full-size image.

Pic of the day: Pothia port on Kalymnos 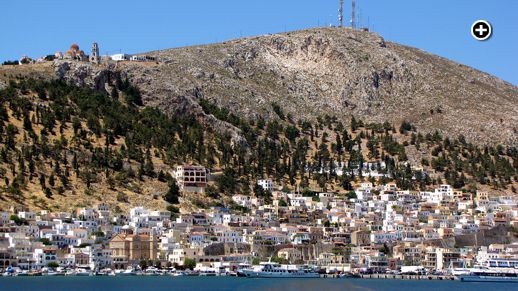 A view of Pothia, the port town on Kalymnos island, from an approaching ferry