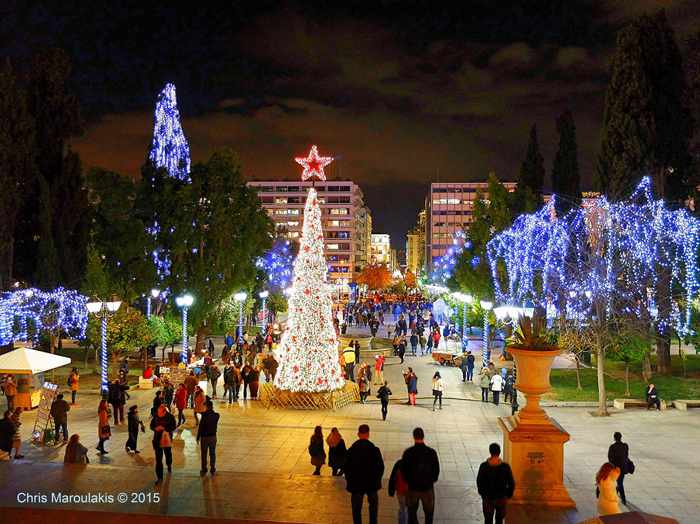 I love this photo that Flickr contributor Chris Maroulakis shot of a Christmas tree and festive holiday lights at Syntagma Square in Athens. The photo is from his Flickr photostream, which features nearly 2,000 beautiful images of Greece, and is reposted here with his kind permission. Click here to open the Chris Maroulakis Flickr page and enjoy his other photos.

The enchanting beauty of Athens

Athens is a gorgeous 5-minute promotional video produced by Visit Greece, the website of the Greek National Tourism Organisation. With its fabulous high-definition and time-lapse photography showcasing top attractions and historic monuments in Greece’s capital city and points beyond, such as spectacular Cape Sounion and beautiful beaches on the Athens Riviera, it’s one of the best Athens videos I’ve ever seen.  Click the arrow on the image above to start the film and take “an enchanting trip around the beauties of Athens.”

The faces of protest at Syntagma Square in Athens 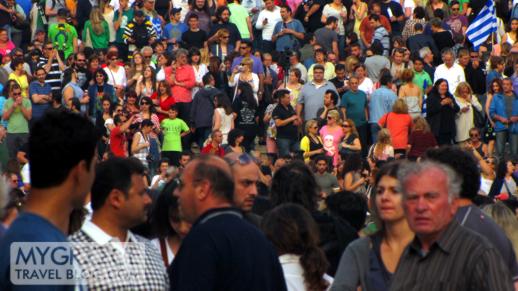 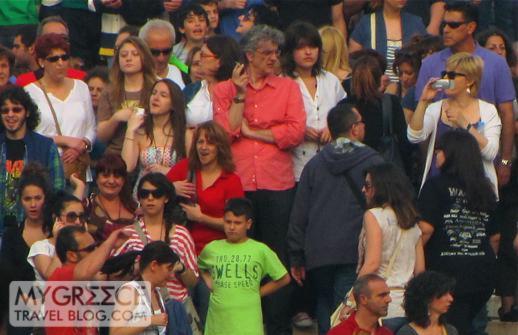 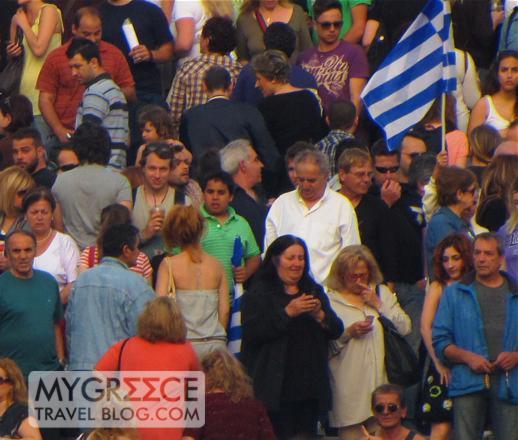 … while this a close-up of another group of people in the same gathering. Do they look as scary, intimidating, dangerous and violent as the media suggest?

Everyday People: The economic turmoil in Greece has made headlines around the world for the past year, with international news media regularly reporting on citizen protest marches that purportedly degenerate into violent rampages of widespread damage and destruction in central Athens. If you were to believe the vague news reports, along with countless unsubstantiated rumours that circulate on websites and social media, you would think it would be completely crazy for a tourist to go anywhere near downtown Athens. Or anywhere in Greece, for that matter. Why risk getting firebombed by anarchists, or tear-gassed by riot police? Why visit a virtual war zone on your vacation?

But are the protest crowds really that frightening and violent? Is the area around Syntagma Square and the Greek Parliament building truly too dangerous for tourists to venture on their way to watch Evzones perform the changing of the guard ceremony at the Tomb of the Unknown Soldier? Would it be foolish to even consider travelling to Athens to see the Acropolis, to visit mainland Greece for a drive through the Pelopponese, or to go beach hopping in the Greek Islands this summer? Thanks to the world media, many people now believe so. During the past three days, the Greece travel forum on TripAdvisor.com has been flooded with posts by panicky travellers worried that it’s far too dangerous to holiday in Greece this year.

I have read many of the news reports about protests in Athens (and elsewhere in Greece), and have seen many photographs and videoclips of black balaclava-clad protesters hurling Molotov cocktails at police in central Athens, getting sprayed with teargas or soaked by water cannons in return. If it had not been for friends and online acquaintances in Athens who assured me that the people in those pictures were only rogue hoodlums and anarchistic troublemakers, and weren’t at all representative of typical Greek protesters, I probably would have been nervous about visiting Athens at the end of our island-hopping holiday in May. But I didn’t feel the least bit fearful for my safety when we walked into a protest at Syntagma Square on May 29.

We had just finished an early dinner in Monastiraki and were walking along Ermou Street with throngs of Greeks and hundreds of other tourists headed toward Syntagma Square, where we planned to catch a tram back to our hotel in the suburb of Glyfada. When we reached the Square, we saw that a large crowd had gathered, blocking traffic flow on one nearby street, and preventing trams from reaching the Syntagma Square stop. We were with an Athens friend, who spoke to police on our behalf to ask where we would be able to catch the tram. We were told the trams were running only as far as the Sigrou-Fix metro station, so our friend said she would walk us to a nearby metro stop so we could catch a train to the Sigrou-Fix tram stop. (We decided to bypass the Syntagma metro station because it was jam-packed with people going to and from the protest area.)  Our friend suggested that we walk around Syntagma Square on the way, so we could see what a typical Athens protest looks like. She said she wanted us to see that it’s nothing like the media would have us believe, and she was right.

The crowd was a mix of people of all ages, from babies to senior citizens. There were families with children, kids, teenagers, young adults, middle-aged adults and retirees. People were laughing, singing, chatting and taking photographs of each other, and lining up to buy beverages,  grilled corn on the cob and souvlaki from the fast food vendors who had set up carts in Syntagma Square. The atmosphere felt almost festive; it reminded me of the many multicultural summer festivals held back home in Toronto. Nobody looked scary, and nobody looked scared. No-one looked intimidating, dangerous or violent. We even saw two wedding parties, including one outside the nearby five-star Hotel Grande Bretagne.  Other curious tourists were wandering around the Square, too, while more were standing on the sidelines, watching what was happening. I felt completely safe; the only serious dangers were getting my feet stepped on in the crowd, or tripping on a motorbike kickstand, if I didn’t pay attention to where I was stepping.

Now, it’s true that some Greek protests have turned violent (and once, even deadly), with small groups of rabble rousers and deliberate troublemakers setting fires, throwing rocks at police, and smashing store windows. But violent protests don’t happen only in Athens. They occur at every meeting of the G8 and G20 — remember how downtown Toronto got trashed by anarchic radicals during the G20 last June? — and one happened just this week in Vancouver following the final game of the National Hockey League’s Stanley Cup playoffs. What we saw on May 29 was a typical Athens protest attended by typical Athenians, other Greeks and visitors. And it was nothing for a tourist to worry about.

Below are some photos we snapped in and around Syntagma Square as we walked past the May 29 demonstration. 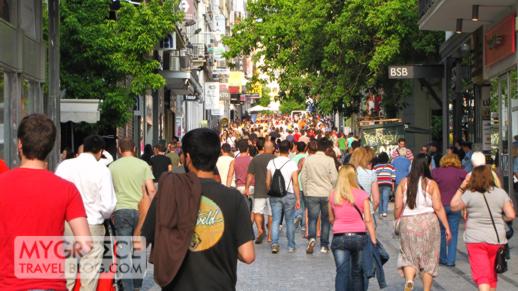 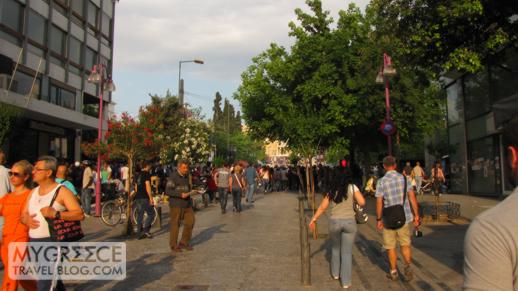 Walking up Ermou Street, approaching Syntagma Square (that’s me on the right, with the black shoulder bag) 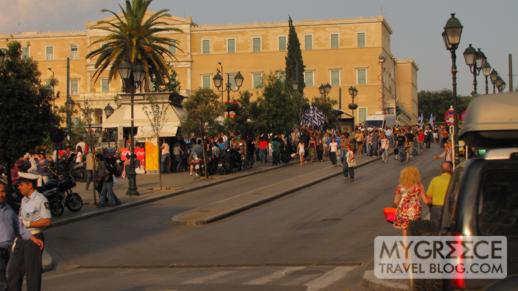 This section of the street to the right of Syntagma Square was closed to vehicular traffic because of the crowds. The tram stop, which is just around the corner at the end of the block, was temporarily closed as well. 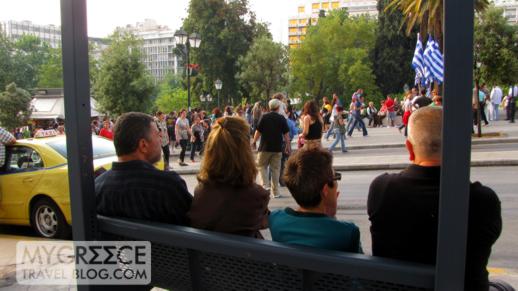 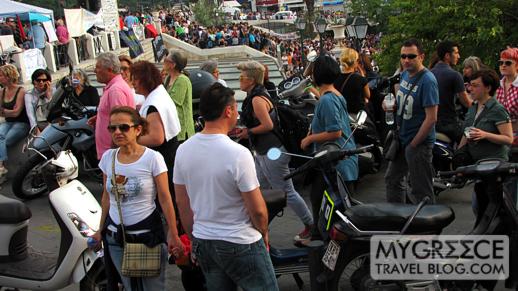 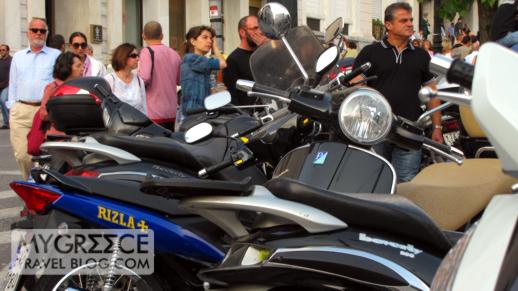 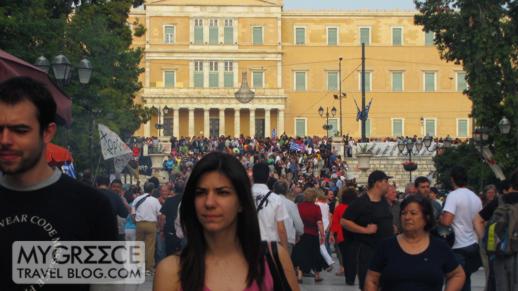 Protesters (and onlookers) were young and old and everything in between 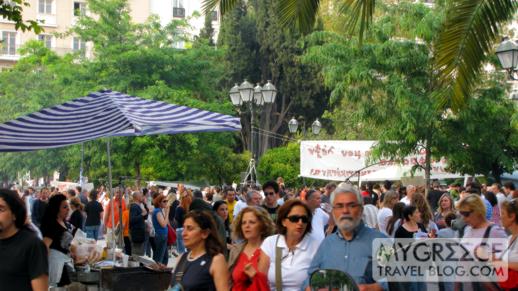 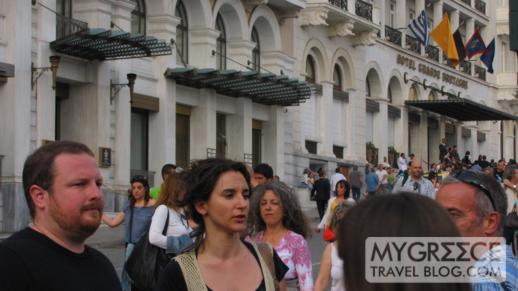 People outside the luxurious Hotel Grande Bretagne, adjacent to the protest site 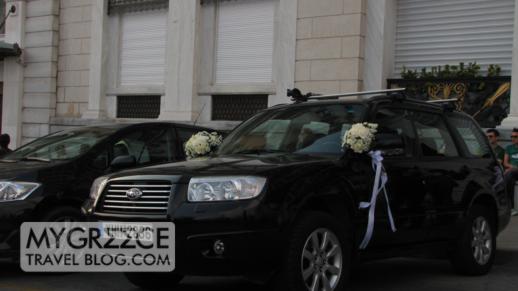 A wedding car at the Hotel Grande Bretagne, just steps from the protest zone